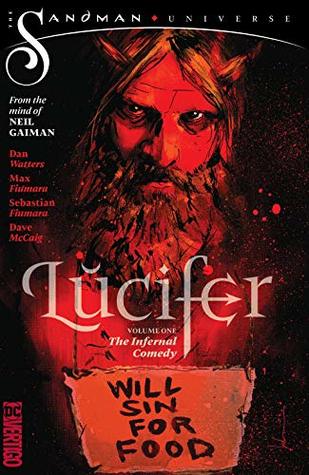 I had high hopes for the new Lucifer: I'm a long-time fan. I thought the Mike Carey Vertigo series was far and away the best of all of the Sandman spin-offs, and I liked the recent Holly Black Vertigo series as well. This one is a mess. There are two primary settings that alternate throughout the story. The first finds Lucifer as a wizened old man, powerless and trapped in a small town from which he cannot escape. He does have fragmented memories of another life, which he struggles to bring into focus. The other focuses on a Los Angeles police detective (Lucifer's adopted hometown). As he copes with a wife dying from cancer, Detective John Decker becomes drawn into the life of his wife's brother--and a mysterious place called Gately House.

There is no apparent connection between the two story lines until the end of the arc, which is very disorienting. And it does not help that very little of it relates to any of Lucifer's prior history. Although Mazikeen finally makes an appearance with the traditional half-mask (which had been dropped for both the TV show and the Black comic series), complete with the annoying, barely comprehensible dialog. It is mainly in flashbacks that we see the Lucifer of old: suave proprietor of the Lux nightclub, lord of the piano bar. He is in command at the end, just in time to face a vengeful angel horde which is eager to avenge his blasphemous resurrection.

So it does appear that the story will be more focused going forward. It's a shame that it began in such a shambles. Max and Sebastian Fiumara can't be blamed: their artwork is lovely to look at, and is compatible with earlier Vertigo artists. The collection includes cover art and a sketchbook.