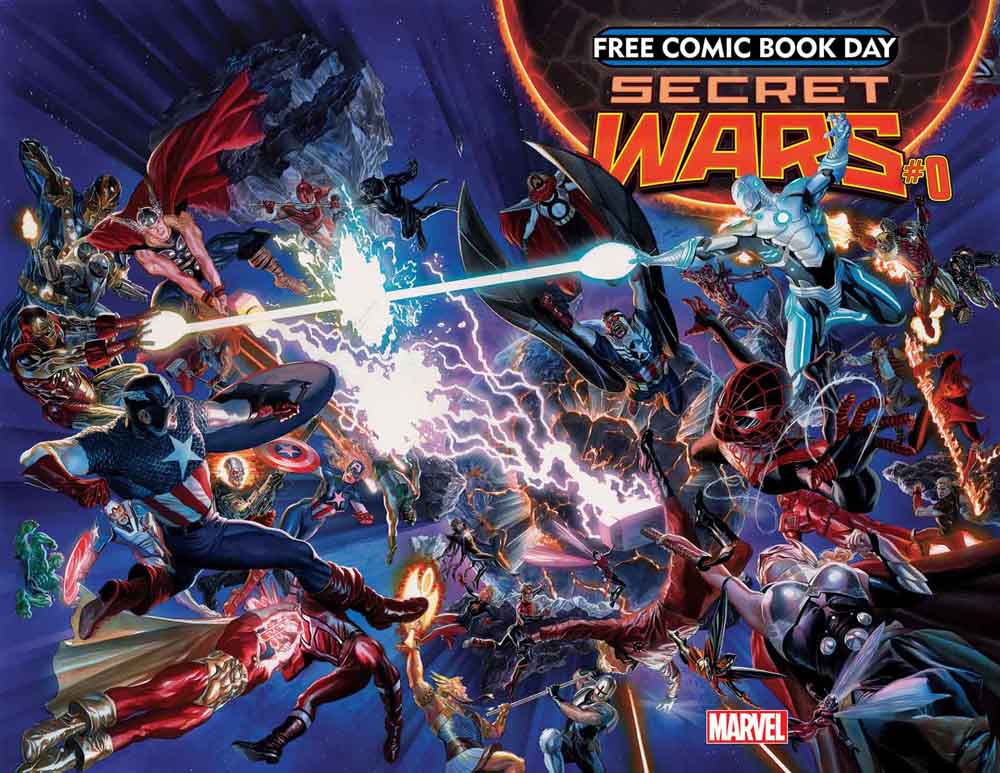 The first issue of Secret Wars, out in May, will begin the story with the heroes of two worlds failing to stop a disaster that destroys both worlds. Copyright Marvel Entertainment Inc. 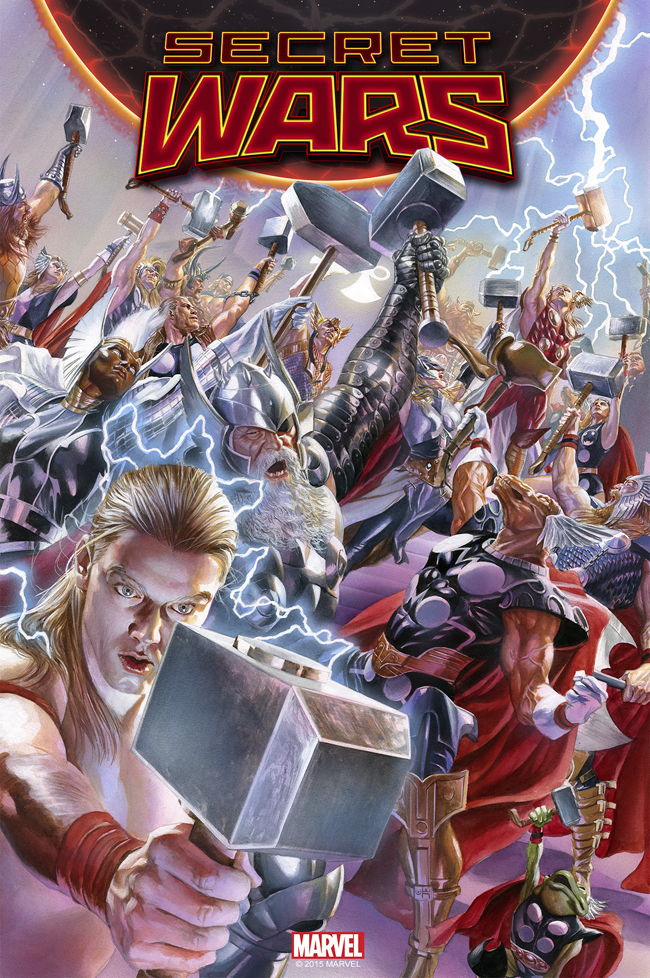 The second issue of Secret Wars, also out in May features a whole lot of Thors, all of whom have appearead in one storyline or another over the last 53 years. Copyright Marvel Entertainment Inc.

We live in an expanding universe. So do the Avengers, X-Men and Fantastic Four – until May, that is, when that will change.

In a Jan. 20 press conference at Midtown Comics in New York City, Marvel Comics Senior VP -- Executive Editor Tom Brevoort and Editor-in-Chief Axel Alonso decreed the end of not only the Marvel Comics universe, which has been building on itself in a more-or-less linear fashion since the early 1960s, but also of the “Ultimate Universe,” an alternate dimension Marvel has been exploring since 2000 in books like Ultimate Spider-Man (currently starring a black/Hispanic kid named Miles Morales) and The Ultimates (a warped mirror version of the Avengers).

The plan, Alonso said, is that the two universes will “slap together” in a book called Secret Wars. No, not the Secret Wars of 1984 or the Secret Wars II of 1985, which were born of a toy line (although there are some superficial similarities). Nor is it the Secret War of 2004, which is a different animal altogether.

This Secret Wars, according to Alonso, is the “endcap” of the Marvel Universe launched by Stan Lee and Jack Kirby 54 years ago in Fantastic Four #1. And whatever comes after … will be different.

The mechanism for doing this has been an ongoing storyline in the flagship Avengers titles for the last year or so. Here’s the plot:

Somewhere in the multiverse, the Avengers learned in 2013, something had gone awry in the barriers between dimensions. So now an infinite number of universes are plowing into ours, one by one, always with the Earths of each universe the breach point. So the Avengers have been struggling for a way to stop these “incursions,” as they are called. But all they’ve managed to do so far is survive – by destroying each invading Earth. That’s not very heroic, but it does reset the clock for the next incursion, by which time, the heroes hope, they will find a way to change the rules.

It turns out, according to Brevoort, “They won’t.” In Secret Wars #1 in May, the Ultimate Universe is the one invading, and the heroes of both worlds fail to stop the collision. At which point, most Marvel titles will be canceled, because Marvel Earth will be no more. Instead, what we have left is something called “Battleworld.”

“Battleword, essentially, is the detritius that’s left over after the destruction of the Marvel Universe and the Ultimate Universe,” Brevoort said. “And it is the little melting pot in which the new Marvel Universe will be created, will be fermented. All the little bits and pieces and dribs and drabs, all the little sections of Earths that were within those incursion zones, all those little areas where it’s intersected, all those little areas have remained and will be fused into a single, gigantic organism, which is Battleworld. In which various characters will live their lives and contend with this new situation and will set up all of the building blocks and all of the bedrock of what the new Marvel Univese will be from that point going forward.”

To create this new Earth, Marvel has mined its rich history, and used famous storylines from its past for its foundation.

For example, a 1992 Hulk story called “Future Imperfect” imagined a future world where an ancient Hulk called The Maestro ruled a nuclear-irradiated world with an iron fist. That is represented by a tract of land on Battleworld called “Dystopia.”

The two Iron Man stories called “Armor Wars,” where Tony Stark flew around the world illegally destroying his technology wherever it was being used by bad guys, is represented by “Technopolis.” And so forth. (An interactive map of Battleworld can be found HERE.)

Secret Wars will run eight issues, but with the old Marvel Universe gone, what else will Marvel publish? A lot, as it turns out, in three umbrella categories:

Last Days: Books with this trade dress will focus on what certain characters – some of whom will probably not survive the transition – do in the last eight hours before the end of the world.

Battleworld: These books are a macro look at the new reality, with stories covering how the zones deal with each other, who’s in charge of what, and overarching  issues of that nature.

Warzones: These books will be smaller, human-level stories about individual characters or opponents.

And after that? Marvel’s mum, but we must assume they’ll keep the characters or story arcs that are popular and jettison the ones that aren’t. So expect Wolverine to return (he’s currently dead), and for that Ultimate Spider-Man guy to hang around, as he seems to have a lot fans.

And that’s not all. Alonso said the stories created during Secret Wars will “have legs” and continue into the new Marvel Universe, whatever that will look like.

“If we wanted to resurrect Gwen Stacy, this would be the place to do it,” Alonso said, referring to Spider-Man’s first serious girlfriend, who died in 1972 (in the comics) and in 2014 (in the movies).

“Or if we wanted four Gwen Stacys …” Brevoort joked. Or is it a joke?

Of course, with the popularity of the Marvel movies, one must wonder why they’re rocking the boat. Why do all this? And the answer is the same one it always is: To sell a lot of comic books. Oh, wait, I meant to say “to tell a good story.” Because, in the end, those two goals usually overlap.

But it’s certain to cause a lot of controversy, especially among older fans who will feel dissed. Do their favorite stories no longer matter?

And then there’s the pride Marvel has always taken in never rebooting its superhero books, as arch-rival DC Comics has done a number of times (the last time in 2011). While they’re not calling “Secret Wars” a reboot, it surely looks like one.

And what about the movies and TV shows? Will they continue to adapt the old favorites, or will they change to reflect this new reality?

The only answers are to be found by reading the comics themselves, beginning with Secret Wars #0, a prologue to the whole magilla which will be one of Marvel’s offerings on Free Comic Book Day 2015, which falls on May 2. (The other is The All-New, All-Different Avengers #1, and who or what that book will feature is anyone’s guess.) After that, both Secret Wars #1 and 2 ship the same month, with the second issue extra-sized to explain what the heck is going on.

As if it could. The Marvel Universe may be shrinking, but it the questions have just gotten bigger.

4. is the Ultraforce Thor (the armpieces match). I owe this reference to this page, which has a whole bunch of further Thors that might've been included.

Permalink Reply by Ron M. on February 1, 2015 at 10:18pm
Other dimensions meant they could tell countless stories that they couldn't put in the regular universe, like Reed ending up the Thing and having to watch Sue marry Ben. How is giving writers fewer story possibilities going to keep them from telling the same story over and over, which is why they say they're doing this?
Bill Cosby: "That's like saying if somebody throws a left hook you should lean into it!"

I haven't seen this in any of the articles I've read.  Where did you see this?  Anything I've read states what they are doing (and even then we're getting a vague outline), but not why.

How is giving writers fewer story possibilities going to keep them from telling the same story over and over, which is why they say they're doing this?

This Newsarama page offers identifications of the remaining figures (scroll down). Its identifications differ from mine in several cases, but in those I'm confident I'm right. I'll use my numbering.

The Newsarama page identifies 7. as Horus. I've been able to confirm this one. He's this version of Horus from New Warriors (more here).

It says 13. is Loki-become-Thor from Universe X, and 16. "appeared in one panel of a Marvel/Ultraverse crossover comic". I haven't been able to confirm these identifications, but they sound informed.

Finally, it identifies 10. as Kevin Masterson, the MC2 Thunderstrike. I think that can't be right; Thunderstrike II had a costume, while 10. lacks a shirt and has a red band around his upper right arm.

As I noted, 19. must be Throg rather than Frog Thor because of his size. (I got that wrong too, but caught it in time.) 13. matches the Ultraverse Thor better than Perun. Note that Perun has no armbands in the images at that link. 17. has clothing that matches the Tales of the Unexpected Thor's, whereas Fenton, the Thor from the Sandman story, was bare-chested.

Perun isn't an alternate Thor any more than Zeus is.

I'm pretty sure it was the same article where Stan said it was probably good and John Romita said he used to fight against stories like that.

I haven't seen this in any of the articles I've read.  Where did you see this?  Anything I've read states what they are doing (and even then we're getting a vague outline), but not why.

How is giving writers fewer story possibilities going to keep them from telling the same story over and over, which is why they say they're doing this?

I slipped into using the Newsarama numbers in my final paragraph in my last post; that should be 4. Ultraverse Thor or Perun, 11.Tales of the Unexpected or Adventure Comics.

I can't find an image, but Loki's eventually adoption of the Thor identity in the Earth X universe is described here. My guess, from the GCD's synopsis, is this was at the end of Paradise X: Ragnarok #2. Earlier parts of the Earth X saga featured a version of Thor who had been turned into a woman by Odin.

Thanks for tracking all that down, Luke. As usual, your scholarship is terrific.

Thanks, Cap. I couldn't track down the last one, the shirtless Thor at the front with the red band around his upper arm, and I'm completely out of ideas as to who he might be.

I think I saw him once somewhere in the 90s before Onslaught.

Incidentally, while searching I heard of several more pre-Thor Thors, including appearances in Venus (see here, here and here; the last link also has descriptions of the stories), and one from a 1958 (on sale) Charlton drawn by Steve Ditko (scroll down for the story).

There's also a post on the Batman #127 story here.

More here; there are good images in the slideshow.

This page argues it's not clear the Vikings thought Thor was red-haired.