The rivalry between the two publishers goes back to the Golden Age of Comics (roughly 1938-1950), when DC was still National Comics and Marvel was known as Timely Comics. But the real battle began in the late 1960s, when Marvel topped DC for the first time.

The two heavyweights have been slugging it out ever since.

In recent years Marvel has been Big Cape on Campus, more or less since it emerged from its late ‘90s bankruptcy and was bought by Disney (in 2009). It doesn’t hurt that Marvel Films has virtually owned the box office with movies like Captain America: Civil War.

Meanwhile, DC Comics shot itself in the foot in 2011 with a lame reboot called “New 52.” While the idea was to make iconic heroes like Superman, Batman and Wonder Woman younger and hipper, the result was DC erasing some of the greatest stories, relationships and legacies in its own history. Longtime fans were not pleased.

Realizing its error, DC tried another reboot in June called “Rebirth,” which fixed many of its previous fixes. In addition to simply making the books better – always a good move – DC reduced the number of titles it was publishing, while increasing the frequency of its better-selling ones. That is to say, instead of publishing Batman and a lesser title monthly, DC is simply shipping two issues of Batman each month. 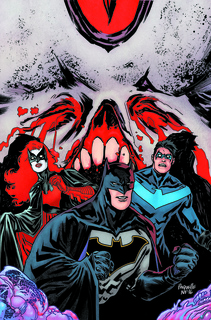 This “less is more” strategy – publishing more than a dozen popular titles twice monthly, and reducing the line overall – turned the board over. In July, DC pulled slightly ahead of Marvel in market share, according to numbers from Diamond Comic Distributors Inc. But in August, they dropped the hammer – DC’s lead in market share over Marvel was more than eight points, 39.27 percent to 30.78 percent.

If your eyes glaze over at the sight of math, just take my word for it: That’s a lot.

Where the carnage is really obvious, though, is in the Top 100 list. In August, Marvel only had one title in the top 10, three in the top 30 and nine in the top 50. DC had all the rest, except for Image’s The Walking Dead at No. 13.

You know it’s gotten ugly when Red Hood and the Outlaws outsells every book Marvel has except for Amazing Spider-Man and Star Wars.

And it’s not like Marvel hasn’t been trying. They’ve had a big summer crossover going that’s supposed to be dominating the sales charts. It just hasn’t worked.

It’s called “Civil War II,” and it’s a sequel of sorts to the source material for the Captain America movie that just burned up the box office. In this story, an Inhuman named Ulysses has come along, a fellow who can (possibly) see the future, which divides the Marvel superhero community into two camps. One, led by Captain Marvel, wants to arrest people before they commit the crimes seen by Ulysses, Minority Report fashion. The other, led by Iron Man, sees fascism in that approach.

This being comics, a philosophical divide can have only one solution: fisticuffs a-plenty. Everyone has taken sides, and mayhem has ensued.

So it’s a big story, affecting most of the Marvel superhero line. And it’s consequential. We’ve already seen – Spoiler Alert – the deaths of Bruce “Hulk” Banner and Jim “War Machine” Rhodes. And Jennifer “She-Hulk” Walters has lost control of her big, green alter ego (which is now gray and mean). 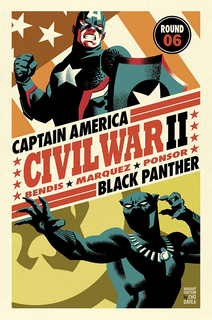 Still, you don’t have to be a cynic to see why Marvel planned this particular storyline at this particular time. People leaving Captain America: Civil War with a song in their hearts and money in their wallets could walk into a comic shop and see multiple titles with “Civil War II” on the cover. Bazinga!

The problem is, it didn’t work.

“Whatever its reason,” writes Rich Johnston at bleedingcool.com, “whatever the analysis (and there will be plenty), despite having a movie on the screen, a Free Comic Book Day launch, the might of Disney and a far more able marketing department, ‘Civil War II’ is a bust.”

But don’t break out the crying towels just yet.

For one thing, the “Rebirth” event has just about come to its natural end. DC is still in the process of revamping its superhero titles, but the big guns have already been fired. The titles receiving the “Rebirth” treatment in the last few weeks have been the likes of Blue Beetle, Batman Beyond and Deathstroke. Those titles won’t stay in the top 20 for long.

And Marvel may not have any bragging rights, but it’s still making money. In fact, virtually all the publishers are still making pretty much the same money they were before DC’s “Rebirth.”

That’s because, while DC is gorging on market share, it’s not really cutting into anyone else’s profits. According to trade magazine icv2.com, “Rebirth” is bringing in, for lack of a better term, new money.

“Sales to comic stores by Diamond Comic Distributors in North America were up a whopping 31.62 percent over the same month a year ago in August,” ICv2.com said. “With DC’s Rebirth re-launch driving sales, periodical comics were up 44.58 percent, while graphic novels were up a more modest 5.53 percent.” 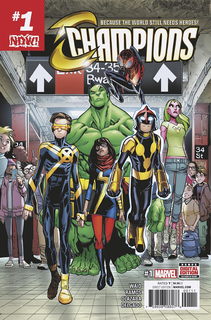 It’s a rising tide, and it’s lifting everybody’s Bat-boat. But where is that money is coming from? Is Rebirth bringing new customers into the comic shop? Are existing customers simply buying more books? Are retailers simply ordering more and getting stuck with product they can’t move? The answer to that question will also answer whether the current sales trends are meaningful, or just a summer fad.

Meanwhile, Marvel is fighting back. They’re already pushing the re-launches of several titles prompted by the events of “Civil War II,” with one of them – The Champions #1 – already in the 400,000 range on pre-orders. (That’s more than both August issues of Batman put together.)

One of the reasons for the big orders is a promotional gimmick called “retailer exclusives,” which is shorthand for a variant cover that is specific to a given comic shop, available if the shop orders a very large amount of a specific book. Marvel has at least eight more of these in the pipeline, including Amazing Spider-Man: Renew Your Vows #1, Avengers #1, Black Panther: World of Wakanda #1, Ghost Rider #1, Iron Man #1, Thanos #1, The Unworthy Thor #1 and Venom #1. Expect more if they have the desired sales impact.

So Marvel v DC continues. One has to wonder if their mothers are both, by some chance, named Martha.

I agree, "Marvel vs. D.C" has always been the best battle. Way back in the day, this was the single greatest playground debate going. In grade school, you were either a D.C. guy or a Marvel guy; and, no comic book discussion could take place prior to both groups stating their cases, prior to discussing the actual matter at hand (this was very similar to the perpetual Mr. Softee ice cream vs. Good Humor ice cream debate. Both trucks would show up at the same time each day, splitting the neighborhood in two. Incidentally, with our respective ice creams in hand, no consumption would occur prior to some good old fashioned ribbing). There were no true "exclusive" fans of either Marvel or D.C.; but, the preferences absolutely had to be declared before the actual stories could be discussed. Admittedly, I always felt bad for the one kid in the bunch who would try his best to defend his collection of Gold Key titles. The poor guy never had a chance.

You were lucky, I didn't dare discuss my love of comics with anyone outside of my family.

I think the battle is far different today than in the past.

Even inside of my family I learned not to discuss comics because I got rolling of eyes and changes of subject.

Back in high school when I was reading the early Marvel heroes and many of the DC comics I never would have said anything about reading comics. Today it is much more acceptable.

When I was home on leave after the Army joined me, I was at a drug store with my mother after eating lunch there. I was buying comics books off their display. The manager, with me standing right there in full uniform, told my mother that I would stop reading comics after I was out of the Army. Implying "don't worry, he's probably not brain-damaged."

Never understood why comics got such a bad rep.  I do have a memory of showing my mother a Howard the Duck comic during the Carter/Ford campaign when Howard was running for president and she was thinking of writing Howard in.

I missed the first few HTD issues but got #4, loved it and shared it with my mom, who hadn't read comics since she was a child in the '50s, and she loved it too.  I was pretty much solely into Marvel Comics from the late '60s to the early '80s when, earning my own money and having more cash, I started checking out various DC and independent titles.  Circa 1986, I quit collecting many titles I had been routinely picking up for over a decade and no longer cared who published a particular title but only if it had good art and a compelling story and characterization that would incline me to keep up with it.  Another factor at the time, though, was that I was working a lot more hours, had a bit more of a social life and a growing pile of unread comics and feeling more and more when I picked up most issues from that pile, "ugh, this is dreadful, why am I still collecting this?"  Since then, most of the titles I've most enjoyed have been from DC and too much of Marvel's output that I've read strikes me as awful dreck.  Of course, I know both companies come up with great stuff from time to time that I may not latch on to until years later in collected formats.  I've no interest in going back to collecting single issues of any title and following the exploits of any particular character or group lost appeal to me decades ago.  Well written stories with interesting characters and appealing, well-crafted art is the main appeal, regardless of who publishes it.

Luke Blanchard replied to Captain Comics's discussion Bond #5: 'From Russia, with Love'
"The underground lake in the movie is a cistern. Istanbul has some number of historic cisterns. (The…"
2 hours ago

Richard Willis replied to Captain Comics's discussion Peter David suffers series of strokes
"Today's Update:by Kathleen David, Beneficiary OK I have an update but not the kind that…"
3 hours ago

Travis Herrick (Modular Mod) replied to Alan M.'s discussion So, What Are You Reading These Days? (besides comics)
"Currently reading Jack of Spies by David Downing. This takes place before WWI, and Jack McColl is a…"
8 hours ago

Mickey McLaurin replied to Peter Wrexham's discussion Celebrity Mastermind - "The History of DC Comics"
"2 and 5 were the only ones I didn't know.  Having read the Batman story multiple times,…"
10 hours ago

Captain Comics replied to Captain Comics's discussion Bond #5: 'From Russia, with Love'
"I'm so confused! I made sure to watch Dr. No, From Russia With…"
13 hours ago

Jeff of Earth-J replied to Captain Comics's discussion Comics Guide: Feb. 6-12, 2023
"I've wanted to read this, but if the publisher doesn't think enough of it to publish a…"
14 hours ago