I have the Welles' one on dubbed VHS.

Alan Napier in The Mole People: 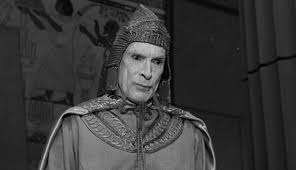 Hereditary, which is more traumatizing than scary, but I cautiously recommend one viewing to people who like the horror genre.

Just don't go in expecting the typical horror movie. The first half consists of a truly unsettling drama about a family deep in crisis.

I also recommend knowing nothing more before watching.

I watched Mysterious Island (1961). The film is an adaptation of Jules Verne's novel with the addition of female characters and stop-motion monsters animated by Ray Harryhausen. Bernard Herrmann composed the score.

The novel is about a group of Americans who wind up on an apparently uninhabited island after they escape a Southern Civil War prisoner of war camp in an observation balloon. They receive mysterious aid from a source revealed later in the novel. Accounts of the book always give the solution to this mystery away.

I know Harryhausen's work by his Sinbad extravaganzas and Jason and the Argonauts. I thought this film more solidly-written and better-acted, but its basic story isn't all that exciting. It did need the monsters to perk it up. The special effect shots depicting the island are very nicely done.

Citizen Kane (1941). Now that I've seen this, I realize how many tihngs I've seen over the years that were references to this picture.

Permalink Reply by Wandering Sensei: Moderator Man on September 21, 2018 at 9:33am

I watched Deadpool 2 last night. Wow--so violent and funny. And the ending!

JAWS: It came to my attention recently that my wife has never seen Jaws. We rectified that situation over the weekend. It’s been a good 30 years since I’ve seen it myself, and I think I saw it only twice. She really enjoyed it, and although I remembered every single beat, it was also as if seeing it new through her eyes.

BATTLE FOR THE PLANET OF THE APES: This is the culmination of a project begun last year. We saw all of the POTA movies together early in our marriage, but Tracy didn’t remember this one at all. By the end, she remarked that it was like a bad SNL skit (meaning that it went on too long). I did cue up the “extended” version.

I did see all of the original Planet of the Apes movies when they came out. I liked the first two, ending with Earth being destroyed. The rest were just milking it AFAIAC.

I love the original Jaws. It was a rare example of a movie improving on the book. I saw the second one, also with Roy Scheider, but I never saw another one after that.

“I liked the first two, ending with Earth being destroyed.”

My opinion is each one got progressively worse.

“I love the original Jaws. It was a rare example of a movie improving on the book.”

I tried reading the book when the movie first came out, but it was a bit too advanced for me at the time and I didn’t get much out of it.

“I saw the second one, also with Roy Scheider, but I never saw another one after that.

I saw Jaw II and Jaws 3-D once each, both in the theater.

I saw The Deep (also by Peter Benchley) twice in the theater. I think I’d have to say I preferred it to Jaws at the time. I should probably watch it again to see if it holds up. I bought the Marvel Comic book adaptation of The Deep, too… probably my first experience of being disappointed at a comic book adaptation of a movie I liked.

That’s what it said on the DVD menu. My choices were “Play movie” and “Play extended version.” I chose “extended version, which was one hour thirty six minutes in length. I didn’t compare that to the running time of the theatrical version, and don’t know anything more about it than that. There weren’t any scenes I specifically noticed as never having seen before.

Many moons ago, when late night television consisted of (a) The Tonight Show Starring Johnny Carson and (b) everything else that nobody would watch because most people were watching The Tonight Show Starring Johnny Carson, I saw all five of the Planet of the Apes movies. CBS Late Night specialized in showing cheesy science fiction movies, and had them on one week, in order, Monday through Friday. Even then, I knew not to think too hard about the plot logic, or lack thereof.

The Planet of the Apes was originally a sateric French novel, then it became a "serious science fiction" screenplay, then a quite different science fiction movie which degenerated into a succession of cheesy movies and a TV spin-off.

Rod Serling's original screenplay has recently been adapted into a graphic novel (which I hope to read this coming weekend).