Oct. 30, 2014 -- Eclectic publisher NBM has a new raft of tempting books, one of which is even in tune with the season.

Zombillenium Volume 2: Human Resources ($14.99) is the second volume in a series featuring a horror theme park somewhere in middle America, staffed entirely with various familiar monsters, who have to restrain themselves from eating the tasty-looking customers. Because who wants to go back to the bad old days of angry villagers with pitchforks and torches? 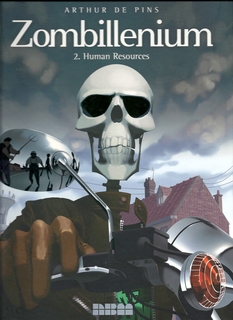 But this uneasy détente between humans and things that go bump in the night hits a snag in this volume: unemployment. With more than 20 percent of the humans in the surrounding area looking for jobs, one of the biggest local employers – zombillenium – is a flashpoint for its policy of only hiring the unliving. As tempers flare, humans infiltrate the park intent on sabotage. Meanwhile, a strangely familiar – and really irritating – patron is threatening a lawsuit because her enormous girth failed to get through a turnstile. Also, the disembodied, motorcycle-riding skeleton Sirius (shades of Ghost Rider!) has been kidnapped by skinheads. Finally, the staff is getting restive, keen on taking bloody revenge over all these insults. Unless manager Francis von Bloodt (a vampire, naturally) can solve all of these dilemmas, those pitchforks and torches loom on the horizon.

The first volume surprised not only in its inventiveness, but in avoiding generic storylines and familiar scenarios. The stars that emerged from Zombillenium were a teenage goth witch and a human who had the misfortune of being bitten by a werewolf and a vampire simultaneously. None of that could have been predicted from the set-up, so their star turns – with a hint of romance – were unexpected. Spoofs usually stay in familiar ruts instead of blazing trails, but the first Zombillenium took the latter course.

Human Resources, remarkably, does the same. Our stars from the first book blend back into the large (and ingenious) cast of supporting characters, while new heroes and villains take the limelight. Once again, it’s nearly impossible to guess where the story is going, until the various strings are tied together in a satisfying climax.

All of this imagination is courtesy of French artist and animator Arthur de Pins, who illustrated the book entirely in Adobe Illustrator. His work is Disney clean, direct and – despite the subject matter – delightful. There’s never any lag, as the art carries you breathlessly forward in a narrative that’s always charging toward the next plot twist.

For previews, character descriptions, a video trailer and more, check out zombillenium.com. 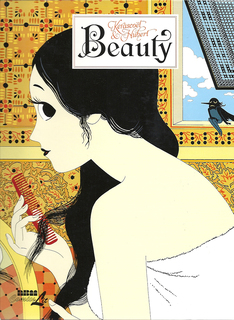 On the non-Halloween front, Beauty ($27.99) still manages to involve fairies, and is more disturbing than Zombillenium. Frankly, what it reveals of the human condition is a horror story in its own right.

Beauty is essentially a fairy tale, and it takes place in that vaguely medieval time and place where you’ll find the likes of Show White and Cinderella. It’s a place run by kings and defended by knights, a time with castles and peasants, a kind of mish-mash of the European Middle Ages. Don’t think about it too much, as the themes involved aren’t specific to any time or place.

Our Beauty of the title begins life as Coddie, a homely peasant girl who smells of fish 24/7, because of her duties scaling the buggers. Because of her looks she is ignored when she isn’t being abused, and much of life is passing her by. There’s virtually no chance of ever snagging a husband, and a long, boring life scaling fish looms ahead.

So when she accidentally rescues a fairy named Mab, she asks a favor: She wants to be beautiful. That’s not possible, Mab replies, because true beauty must be bestowed at birth. But what she can do is place on Coddie a glamor, so that she appears incomparably beautiful to anyone who lays eyes on her.

As they say: Be careful what you wish for.

Every man that sees her falls madly in love (or lust, hard to tell), a result that gets her chased out of her own village, as the men fight each other over her, and the women want to get rid of her. This scenario plays out again and again, with minor and major variations, as Coddie – now called “Beauty” – takes up with a knight, then the Southern King and finally the Northern Boar King. The last conquers the South for the sole purpose of achieving Beauty, massacring thousands and destroying a kingdom in the process, then ravishes her repeatedly before locking her up in a castle keep where no other man can see her.

That’s because another old saying comes into play here: Coddie’s beauty is power, and power corrupts. While Beauty herself remains largely innocent – she doesn’t appear to be very bright – the effect she has on those around her means her beauty (as she eventually comes to accept) is more a weapon than a gift.  It is certainly destructive, as it drives one man after another to infidelity, lunacy, murder, war and death.

Meanwhile, Coddie isn’t the only important female in the book, as we are introduced to various mothers, daughters, wives and queens who have their own agendae. Their looks – some attractive, some not – are echoes of the main refrain, reminding us that while beauty may be skin deep (and in Coddie’s case, not even that), it’s other qualities – intelligence, hubris, generosity, selfishness – that truly define a woman, and are far more important than looks.

This cautionary tale by the French writer Hubert is illustrated by “Kerascoet,” a husband-and-wife team of French cartoonists. They employ a style reminiscent of Japanese woodblocks and other art from that country’s rich illustrative tradition. This retro style is perfectly suited to a fairy tale – nothing modern would have worked as well – while the Asian influence lends an exotic, timeless touch to Western eyes. 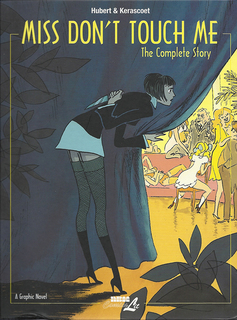 It’s an entirely different style than the one they employed for the two volumes of Miss Don’t Touch Me, which have been re-released by NBM in an omnibus ($29.99).

Also written by Hubert, Miss Don’t Touch Me is the story of Blanche, a poor girl in early 20th century France who ends up as a “specialty” in a whorehouse: The girl you can’t have. Is that a real thing? Well, in the book it is, and our hapless heroine stars in a truly charming sex farce that doubles as a murder mystery, while retaining her virtue throughout. Which isn’t easy, when you work for unsavory types in a whorehouse, who may or may not be involved in murder!

The second volume of Miss Don’t Touch Me (included in the omnibus) is entirely different in tone from the first. It follows Blanche’s story, but instead of being a deft comedy with an accidental and likeable star, it turns into a melodrama starring a sympathetic victim. Here Blanche is still with the whorehouse, but meets her real mother (a disappointment) and dates a rich twentysomething whom she hopes will lift her from her shabby world forever (he doesn’t).

Blanche’s naivete and trusting nature works against her here, whereas those virtues were her salvation in the first book. Blanche’s story lurches from slapstick fun to depressing pathos, from improbable farce to grim reality.

Kerascoet employs the same style for both, a retro pen-and-ink that with a hint of impressionism – the prevailing art style of the time. The style is strong enough to cover the emotional range of the book, which is significant, and light-hearted enough to carry the reader through the painful parts.

Jeff of Earth-J replied to Steve W's discussion A Cover a Day
"A mere 1000 issues? What a newcomer! As I pointed out on the "Three of a kind"…"
13 minutes ago