Yes, I’m talking about the same Constantine who starred in the movie of that name in 2005, starring Keanu Reeves. That film was based on a storyline from Constantine’s comic book, titled “Bad Habits,” which is a reference to more than smoking. 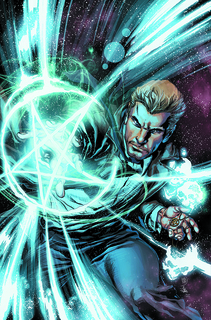 Other bad habits Constantine has include trafficking with demons, accidentally getting his friends killed (a lot) and talking his way into, and out of, trouble. The movie dealt with some of that, but the true appeal of the character didn’t really come through on film.

For one thing, Constantine began life as Sting. In 1985, Swamp Thing artists Steve Bissette and John Totleben were big fans of The Police, and asked writer Alan Moore to introduce a character they could draw like Police lead singer Gordon “Sting” Sumner.

Moore obliged, and before you could say “cheers, mate,” he introduced a working-class Brit in a rumpled trenchcoat who looked exactly like Sting. Constantine claimed to be a magician, but you couldn’t really tell if he was telling the truth – in fact, you can never tell if John Constantine is telling the truth. There’s a reason those who know him well call him “Con Job.”

Constantine wasn’t the usual type of comic-book magician. Unlike, say Dr. Strange (at Marvel) or Dr. Fate (at DC), Constantine didn’t wear a costume or fly through the air or throw mystical bolts around like confetti. Constantine’s powers, such as they were, seemed to be that he knew a whole lot of things he shouldn’t, that he seemed to have contacts and sources all over the world and that he was a fast talker. The running gag about Constantine was that nobody could tell if he was a con man pretending to be a magician, or a magician pretending to be a con man.

And honestly, it’s a little of both. Constantine did seem to work a little magic here or there, but as often as not, you could chalk up the results to the power of suggestion. Oh, and trickery. In “Bad Habits,” for example, Constantine did in fact make deals with demons, so you know that he is some kind of magician, but he won by verbally tricking them all – which is how he survived lung cancer! But I’m getting ahead of myself. Back in Swamp Thing, Constantine proved so popular that he graduated to his own title. Legend has it that DC wanted to call its new book Hellraiser, but the Clive Barker people objected. So they changed a few consonants and Hellblazer was born.

Hellblazer ran under DC’s mature-reader banner Vertigo, and became the backbone of that line, running 300 issues. And in that book, we learned a lot about Constantine’s past, saw a great many of his friends get killed and a tremendous amount of Constantine skating through lethal adventures by sleight of hand and fast talking.

And we saw a little heroism, too – despite his overt cynicism, Constantine had an urge to help people, especially people being pushed around by cosmic bullies like angels and demons.

And he did something else unusual, too: He aged. In the first year of Hellblazer (1988) he celebrated his 35th birthday, and in its last (2013) he turned 60. A sexagenarian comic-book star? Only Constantine could pull that off!

But in 2011, DC made a huge change in its superhero line – the “DC Universe” – wherein they rebooted every character to the beginning of their respective careers. That shock wave reached into the Vertigo line, and plucked out its most popular character, John Constantine. Hellblazer was canceled, and Con Job found himself in the DCU in his twenties again, this time with genuine magical powers, the House of Mystery as his private space-and-time-traveling vehicle and a mission to contain magic all over the globe, so as to prevent it from pushing around little people. Oh, and he still looks like a famous British Isles person, this time Irish actor Jonathan Rhys-Meyers.

So Constantine, with a few minor tweaks and in a new “universe,” remains constant – and, to my surprise, almost as interesting as his previous incarnation.

This twentysomething character stars in two books, Constantine and Justice League Dark. The former is a toned-down Hellblazer, but the latter is a team book for DC’s occult heroes.

The latest collection, Justice League Dark Volume 3: The Death of Magic ($16.99), shipped Jan. 29 and stars the mainstays of the JLD – Constantine, Zatara and Deadman – with guest stars Black Orchid, Frankenstein, Madame Xanadu and Swamp Thing. In the course of the adventures reprinted herein, the team helps out good-guy DC magic person Timothy Hunter (formerly seen in the Books of Magic series) and bad-guy DC magic person Doctor Destiny (whose long career goes back to being a Justice League villain in the 1960s). And throughout, it always seems like Constantine is on the verge of losing control, and it always seems every character is on the verge of storming off. And yet, to everyone’s surprise, Constantine somehow pulls it off. Not quite the character we’re used to, but still in the spirit of the old fast-talking jerk at Vertigo whom nobody liked, but who nevertheless always saved the day.

This is even more obvious in the solo book, whose first collection (Constantine Volume 1: The Spark and the Flame, $14.99) shipped Feb. 12. Remarkably, despite having tighter restraints than the old mature-readers title, this “Teen +” title retains the fierce, spine-tingling horror vibe of yore. As Hitchcock knew, you don’t have to show a lot of blood to creep people out. And as everyone knows, a little tease is far sexier than nudity. So despite the lack of sex and blood, it’s a very familiar book.

So, yeah, today’s Constantine is a bit watered down from the one we older readers loved at Vertigo. But he’s still the same smart-alec manipulator he always was. Heck, he even seems to have the same trenchcoat.

And he is still a unique character well worth reading.

Oh, and he still looks like a famous British person, this time actor Jonathan Rhys-Meyers.

Hoo-boy!  First line of his wiki-page...

I came in late to him, only seeing him in JLD and I'm not sure I like the character that much. Seeing him try to swipe Billy's powers and the way he generally plays everyone makes me wonder why anyone stays in the same room with him for more than five minutes if they are not tied up.

So far I've only read the first two Justice League Dark trades, plus some other New 52 guest appearances. I too was pleasantly surprised by how well the character survived the transition. I'm looking forward to reading the first solo collection and the third JLD one.

So Rhys Meyers is Irish. I doubt anything an ignorant Yank says will disturb him and his money and fame overmuch.

As to why people stick around Constantine, that's one of the things I've grown to see as a balancing act by the writer. At first I thought everyone should leave, and they often threaten to. But then I realized that Zatanna is sticking around because, despite it all, she's still smitten with him. And Deadman sticks around because he's smitten with Zatanna! The others -- according to DC -- aren't regulars. Madame Xanadu has stuck around for the most the run so far, but I think she's on the way out. Frankenstein's run is starting to look relatively permanent, since the demise of his own book, but there's nothing tying him to the team and he could disappear at any time. Like Black Orchid, who disappeared without me noticing, and Tim Hunter, who was only around for his own storyline.

Ah now, we're only a poor wee country and we don't have much to brag about.

The odd big Hollywood star is one of those things, and the small matter of managing to break away from the claims our larger and stronger neighbour made over us and our nation is another, so that's two for one...

Wait, are you saying that there's some ill will between the English and Irish? [Ducks, runs]

I guess it's too late to recall the article at this stage?  :-P

I fixed this one. The McClatchy version ran two weeks ago, though ...

British Isles?  I can see you'd have to throw out a little link between your ideas there to admit he was Irish.

Well I've looked all over my map, and I don't see the state of Ireland or England in America.