While comics aren’t  in any danger of becoming a girls’ club, many recent graphic novels are female oriented, either in subject matter or protagonist. The quality is uneven, but they’re worth a look.

Take, for example, Lulu Anew ($27.99, NBM Publishing Inc.) by Etienne Davodeau, translated from the French. The story, such as it is, concerns a middle-aged housewife named Lulu who, one day, just … leaves. While on a job interview at a seaside town a train ride away from home, Lulu goes on walkabout. She doesn’t call home to say she’s leaving her husband or anything, she doesn’t indicate when or if she’s coming home; she just starts walking down the beach. While we get very little of what’s going on in Lulu’s head – the story is told via family and friends as they discuss the situation – it’s pretty clear she doesn’t really have a plan at all. But we learn more and more as her worried friends and family do. 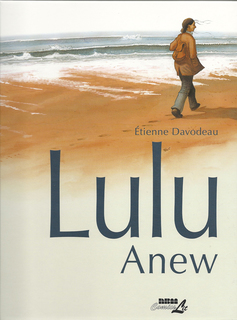 That seems like pretty weak tea. But as the various threads play out – the traveling companions, the abusive husband, the crusty oldest child, the shallow neighbors, the unexpected fling – you begin to understand what Lulu’s runaway act is all about. Not so much in words, exactly, but in understanding how her life has been circumscribed and limited, her dreams crushed or stillborn. You may not be a middle-aged, mediocre French housewife, but by the end of Lulu Anew, you know how it feels to be one.

Not that it has to be that specific. Who among us hasn’t wanted to chuck it all and just take a train to anywhere? Who hasn’t looked in the mirror and wondered, “Who am I?” and “Is this all there is?” Lulu is a specific character, but her adventure is a lens into the human condition.

The artwork is rendered in the expressive, attractive Franco-Belgian style favored on the continent. The quiet competence of the artwork brings a stillness to the work, as if characters and readers alike are holding their breath in anticipation of … what?

The narrative gives you an answer, but as with Lulu Anew in general, the reader will have a genuinely personal reaction.

Speaking of middle-aged women, Room for Love ($22.95, SelfMadeHero) stars Pamela Green, 44, an English divorcee and romance novelist suffering from both depression and writer’s block. That dreary life collides with that of a homeless Irish lad getting by on his wits (well, prostitution), resulting in him getting chased out of his squat by police. Feeling guilty – and perhaps some other things -- our heroine feels obliged to let the young man bunk in her upscale, suburban home.

As the title implies, there is a quid pro quo here, which at first energizes Pamela. But it’s never a good idea to invite a stray into your home until it’s housebroken, and this rootless boy is anything but. The imbalance of age, class, sex and needs plays out in a brutal, unflinching manner that probably isn’t for everyone. 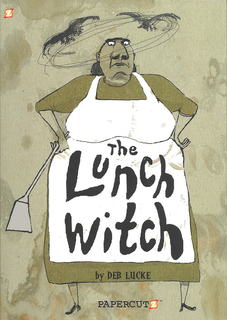 Meanwhile, Grunhilda Blackheart is yet another middle-aged woman starring in a graphic novel, although this lady might be more accurately described as “Medieval-aged.” She is the star of The Lunch Witch ($14.99, Papercutz), one of those rare books that can appeal to both kids and adults.

Grunhilda finds herself in a place familiar to many in the working world: Her industry is in decline, her skills are mostly obsolete and she has just lost her job. OK, her industry is black magic, her skills consist of brewing evil potions and her job was at the Salem Haunted Museum, all of which are likely unique. But her situation is little different than many other middle-aged workers crushed in the global economy.

Amazingly, Grunhilda’s job search turns up something for which she is perfectly suited: elementary school lunch lady! Where else are noxious potions and mysterious meats not only acceptable, but expected?

But there’s a fly in the ointment, and I’m not talking about the bugs Grunhilda sweeps up on the kitchen to spice up her broth. An underperforming student  named Madison figures out the new lunch lady’s secret -- and blackmails Grunhilda into coming up with a make-me-smarter potion. Not only is Grunhilda a failure as a  witch – she’s being blackmailed by an elementary school student! – but coming up with the potion would violate the first rule of witches (“Never be nice!”) and invite the wrath of her dead, but nevertheless buttinski, ancestors.

The one drawback to The Lunch Witch is the artwork, which is of the Ralph Steadman school of scratchy-scratchy exaggeration. While often visually funny, it’s not exactly detailed or subtle. But if you’re a fan of Tim Burton, you should feel at home. 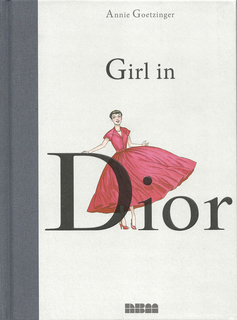 Moving away from middle-aged women, Girl in Dior ($27.99, NBM) stars the youngster of the title – which, to be fair, is just a cover for a biography of Christian Dior … a middle-aged man!

The story opens on the fictional Clara, a young fashion reporter covering the opening of Christian Dior’s fashion house in 1947 Paris, along with the launch of his “New Look” clothing line. While Clara’s job doesn’t last long, Dior sets her up as a runway model. Through Clara’s experience, we learn of Dior’s character, his laser focus on dresses, his seamstresses and his lifestyle up to his death in 1957 at the age of 52.

Amazingly, this is not a boring book for people with little interest in fashion. For one thing, a number of historical personages drop by, including Hollywood stars like Lauren Bacall and Rita Hayworth. For another, the artwork is flat-out gorgeous.

Writer/artist Annie Goetzinger is one of France’s best-known names, and it’s obvious why. Her art here is skilled and spare, focusing the eye exactly where needful with nary an extra line or cross-hatch. This elegant, airy look is abetted by a color palette almost entirely in pastels.

While fashion isn’t to everyone’s taste, Girl in Dior can be.

I flipped through Girl in Dior at MOCCA Fest yesterday, and it's really stunning. But I'm especially excited for Lulu Anew, since Etienne Davodeau's last book with NBM was The Initiates, which is one of my favorite graphic novels of the last three years, The way you mention the stillness in the work -- that's what I've been hoping for. Reading The Initiates felt almost like meditation to me. I've never read a comic that had that effect on me, and I've been dying for more.