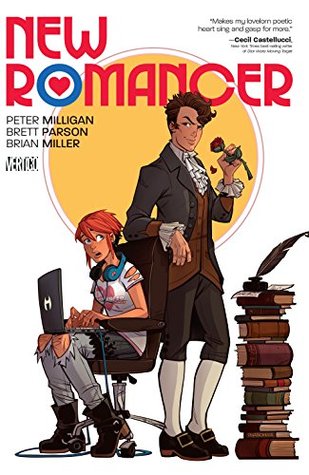 Alexia Ryan is a young computer genius with a fixation on classic authors, especially Lord Bryon and his romance poetry. She is working on a dating algorithm for the New Romancer dating site, piggy-backing on her A.I. work at a large tech firm. This is where things take a bizarre turn, which requires a generous amount of suspension of disbelief. Lexi needs her old employer's servers to run her program, and in the course of connecting she accidentally causes her personality software to download into artificial bodies that the company calls golems (after the animated anthropomorphic figure of Jewish folklore).

Thus we get Lord Byron in the flesh as a character in the story, followed by Casanova (along with others that are revealed later, but most do not play major roles). The two legendary lovers are natural enemies. The transition into the modern world leaves their charisma intact, but their seduction methods often don't jibe with contemporary mores, which makes for a lot of humor. Lexi is attracted by Byron--as expected--but after awhile she wonders what she ever saw in the jerk. Mata Hari also enters the mix.

The other major virtual presence is computer pioneer Ada Lovelace (the only legitimate child of Lord Byron). She plays a pivotal role, helping Lexi to complete her algorithm, as well as providing Lord Byron the opportunity for redemption. Now much wiser, Lexi herself rides off in search of real love. It's all a bit off the wall, but the frenetic action carries it along. Parson's art is kinetic, as well as excelling at facial expressions: there is more than a touch of caricature about them.

This one sounded like fun to me, but I passed on it for money reasons, and I never heard any buzz about it after the fact. It sounds like something I'd enjoy, though. And man, the pun of the title is just delicious.

Yeah, Milligan is never less than clever, is he? I picked it up cheap during one of Comixology's Vertigo sales, and I would recommend it.