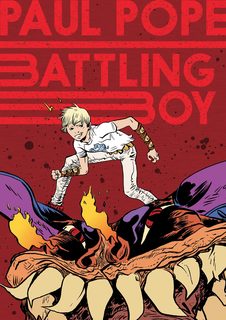 Paul Pope fans have waited a long time for this book: it was first announced in 2006. Pope's unique artistic style is an amalgam of many influences, including manga and European comics. He says of the book "as for comics inspirations...it's all about channeling Moebius and Kirby." It's the story of a young demigod named Battling Boy, sent to Earth in a place called Acropolis to fight monsters as his rite of passage.

But the story begins with human champion Haggard West battling a monster gang. Just when he seems to have gained the upper hand he falls victim to a trap. His daughter Aurora arrives too late to help. The scene shifts to a floating world in space and a returning hero. Even knowing about the Kirby influence the place is also reminiscent of the Marvel version of Asgard. Battling Boy's father has just returned from a quest, but there's no time for an elaborate reunion. BB's Turning Day is tomorrow, so he must go on a Ramble.

Our hero is deposited on Earth on a mountaintop with a view of Acropolis. It's a sobering sight: a city that stretches as far as the eye can see, under siege by a plague of monsters. When BB reaches the city, he quickly finds himself battling a huge car-eating monster called a Humbaba, which a human force has already faced unsuccessfully.

So the story has all of the elements that Pope likes to work with: a science-fiction setting with wild inventions plus some steampunk elements; big action sequences with a lot of energy; and room for character development in a cast of characters.

Aurora's story is also important to the narrative; in fact Pope has said that the entire story is more about her than the Battling Boy: " the second series..."The Rise Of Aurora West," which is a two-book story detailing her relationship and early training with her dad, Haggard West, who is killed in the first scenes in "Battling Boy" #1. Her first book will be out next year, before the second BB book, then the second Aurora book drops. Together, the two series tell one long, interconnected story. In some ways, Aurora is the real star of the book, since she has a story which develops throughout all four books." She comes to BB's aid in this book, and we also see her looking through her father's hideout.

So what we have here is the opening salvo in a much larger story. It's a joy to read, especially the action sequences with the monsters. Lots of crazy energy! I'm used to seeing Pope's art reproduced larger than this, and I think it loses something at what amounts to digest size. It won't surprise me to see a larger sized deluxe edition at some point, perhaps after all of the parts have been published.

I don't have anything to say, but I was interested to hear about this, Mark.