Oh , the irony . Let's continue something that was discussed at the MSA Old Home , namely , remaining print comic fanzines - And , for diversity , pro/semi-pro/" pro-zine " comics publications as well .

CBG remains in business . The Comics Journal has now announced that they will come out annually , with " a 600-page plus " issue .

I am Facebook friends with Jon B. Cooke but I haven't yet checked to see if his Comic Book Artist has managed to continue recently , post-its Old Home...

Toomorrows , which indeed has itself a little nook/corner , with The Jack Kirby Collectore , Alter Ego , and Back Issue .

It was ICG... I don't recall them having any direct connection to Eclipse, but having sold off my indices within the past week, I can no longer check them to verify. But here's the front cover to one I used to have. 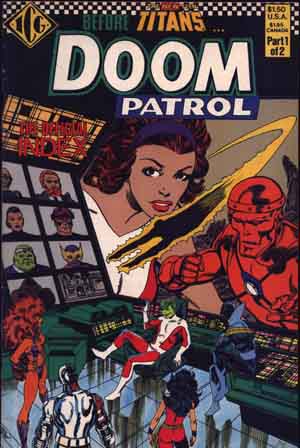 ICG stood for the "Independent Comics Group", but as I recall, it was actually Eclipse that published them.  Exactly what the arrangement was between ICG and Eclipse, I don't remember.

Just searched for ICG on Wikipedia and it sent me to the Eclipse page. I didn't find any reference on that page, so then I went to the list of titles Eclipse published, on there are 6 "official index to ..." titles. It says published be ICG and distributed by Eclipse.

The Doom Patrol index referenced above is not listed. Hmmm.

How many issues exist of the old fanzine "Collector's Dream?

Here's what I wrote about Collector's Dream in my CBG column on my favorite fanzines, which you can read here:

Collector’s Dream: A Canadian fanzine covering American comics, CD began in 1977 from G&T Enterprises, run by Tony Frutti and George Olshevsky, who published fabulous Marvel Indexes. The indexes were promoted in the zine, which, as the name implied, focused on collecting comics (as opposed to comics history or news). Features included grading strategies, an interview with Bob Overstreet and key creators, and price guides for non-comics collectibles.

Frutti revived the zine as Dreamline for one more issue in March 1982 with a cardstock cover and heavy paper interiors, in the style of RBCC. It featured 108 pages for $2.25 with typewritten interiors that were dense with features and some illustrations. Included were articles on 3-D comics, a retrospective on the third JLA/JSA team-up, interviews with Joe Staton and Alley Oop cartoonist Dave Graue, a history of Sgt. Rock, and various commentary columns.

Thank you. I didn't know about the 1982 Dreamline.

...I have run into TWO different newsstand-distro'd comics (once removed) fan magazines !

Going backwoids (y'knuclehaid , y') last nite , at the Santa Cruz CVS , I saw a new issue , I believe , of that TRUE STORY different-subjects I mentioned before , an AVENGERS 2-centered one (Though that's the only subject mentioned on the cover other superhero stuff ~ Including something for non-Big Two content about a new " Heroes " PlayStation?? game that I couldn't find when I actually flipped thru it , is this a new continuation of the 00s NBC series or is " Heroes " a generic enough title - Contacted David Bowie & Brian Eno ? :-) -  that it's a new concept ? - inside ?

How long have you had a weak back?

LOL! Those types of magazines pop up on occasion, especially these days with so many movie, TV and web-based superhero shows out there. But they're mostly aimed at kids or movie fans. They aren't anywhere close to a "fanzine" or even something most real superhero fans have an interest in. Some of them get solicited in Previews, but I don't know that they sell many copies that way.

The newsstand near me carries almost everything, including the Twomorrows mags and a bunch of horror magazines. But I think real fanzines are few and far between, especially for comics. There used to be a huge number for music fans, but I imagine that's all migrated to the web as well. Even with easy reproduction and high-quality printing readily available cheap, paper is a bad way to go.

MSA , I believe I said I was covering pro-ish/non-" fanzine " world here too also .

How long have you had a weak back?

You can do that, I just don't know that there's much interest in hearing about sightings of them, especially with your stream-of-consciousness discussion of the contents.Sightings of them aren't that big of a deal, since we know they exist. I was hoping you'd found something of interest.

If I correctly understand what you were asking (30-70 chance), NBC is rebooting Heroes for a 13-part show, with some of the original cast. http://www.nbc.com/heroes-reborn

I liked it for awhile and I watched it all, so I'm certainly interested in what they come up with. But at some point, there won't be enough time in the day to watch all the superhero shows on TV!

Philip Portelli replied to Steve W's discussion A Cover a Day
""Not only that but your feet stink! Wear some socks next time!""
13 minutes ago

Jeff of Earth-J replied to Jeff of Earth-J's discussion Tales to Astonish
"THE INCREDIBLE HULK #102 - "Big Premiere Issue!" The conclusion of this story takes me…"
49 minutes ago