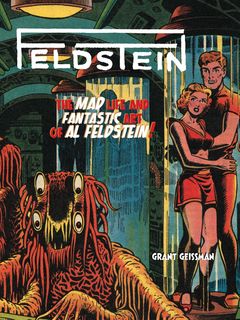 Feldstein: The MAD Life and Fantastic Art of Al Feldstein!

The history of E.C. Comics is inextricably bound to Al Feldstein’s career: first as artist, then writer, and finally as longtime editor of MAD magazine. That association is at the heart of this combination art book and biography, but biographer Grant Geissman does not neglect Feldstein’s life and early career, or his painting work since retirement.

The artwork presentation begins with the earliest surviving Feldstein work from the High School of Music and Art, then moves on to his early comic-book art and his work in the 1940s Victor Fox shop. Titillating “headlight” comics like Junior and Sunny demonstrate that the depiction of voluptuous women has a long history in comics: several full-length stories are reproduced, not just sample images. Feldstein started at E.C. comics as an artist, and continued doing cover art even after he began concentrating on writing and editing. Six classic E.C. stories he illustrated are included, plus all of the covers (many placed alongside the original artwork), and other work like house ads. E.C. fans will enjoy the behind the scenes photographs, as well as images from many of the other E.C. artists.

The Congressional hearings on comic books which led to the creation of the Comics Code receive an entire chapter. And well they should, because they quickly led to the demise of the entire E.C. line. That chapter includes a complete transcript of publisher William Gaines’ testimony, but Feldstein has only a bit part. He advised Gaines not to testify, which certainly looks like good advice in retrospect.

In the end Feldstein landed on his feet: after massive layoffs at E.C., he was rehired to take over MAD Magazine. He edited it for thirty years, leaving a lasting impact on the magazine. Most of the regular features associated with MAD were introduced under his leadership: the fold-ins, the Spy vs. Spy cartoon, and Mort Drucker’s TV and movie parodies, just to name a few. But he contributed very little artwork during the period, so most of the images must come from others. 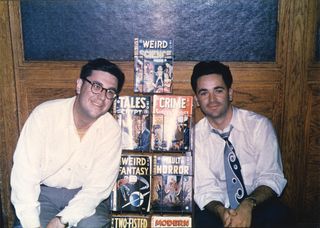 After retiring Feldstein moved from New York City to a ranch, and returned to his work as a fine artist, producing many Western canvases. The resurgence of interest in E.C. Comics also resulted in many commissioned paintings “revisiting” his classic cover images from the 1950s. The final chapter in the book is a large gallery of these paintings, giving a full picture of his work nearly up to the present.

The Introduction promises to examine every aspect of Feldstein’s career and personal life, “not all of it sweetness and light,” so I should probably say a few words about that. This is not a whitewashed “authorized biography,” but while it is true that Geissman does not ignore personal or professional conflicts (e.g. infidelity in his first marriage, or friction with EC business manager Lyle Stuart) it is also certainly not a tell-all biography. The negative aspects of the story are given a respectful distance, and there are no lurid details. At the same time, Geissman has known Al Feldstein for more than twenty years, and was given unprecedented access to Feldstein’s personal archives, which provided many of the artworks and photographs that so richly accompany the text.

Finally, a word about the author. Grant Geissman has written three other Eisner Award-nominated books related to E.C. Comics and MAD magazine. But jazz fans might recognize his name from his primary occupation as a jazz guitarist. He began his career playing with trumpeter Chuck Mangione, and is heard playing the guitar solo on the song “Feels So Good.” In addition to many recordings under his own name, he has written music for television. He is the co-writer of the Two and a Half Men theme (“Men, men, men, men, manly men”)!

What are the other two books about EC Geissman wrote?

The others go back a few years:  Collectibly Mad (Kitchen Sink Press, 1995); Tales of Terror! The EC Comics Companion, co-authored with Fred von Bernewitz (Fantagraphics, 2000); and Foul Play! The Art and Artists of the Notorious 1950s E.C. Comics! (HarperDesign, 2005). I haven't read the others, but I imagine there's some overlap in coverage. There are probably Feldstein covers, at least, in Foul Play.

"Tales of Terror" sounds familiar -- I may have it, or thought about getting it at some point. If I got it, I didn't get around to reading it. The others don't sound familiar.

I've ordered the Feldstein book, so you sold me!

Some time ago I made the decision to forego mostly biographical books about comic book artists in favor of strict comic book anthologies, and although I did take a peek at this book when it first shipped, you do make it sound tempting! I knew Geissman was a musician, but I didn't know about "Feels So Good" or "Two and a Half Men" specifically. Neat!