These issues of Teen Titans demonstrate not only a title in transition, but reflect both a company and a country in transition. 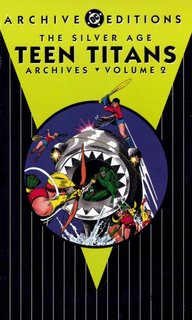 As Michael Uslan points out in his informative and entertaining foreword, the early issues were by writer Bob Haney and editor George Kashdan, who were "two hopelessly out-of-touch adults" writing about youth culture they did not understand, utilizing dialogue which "did not relate well" to its target audience (of which Uslan and I were both members).

Before moving on, it's important to emphasize just how painful that dialogue was. Words like "fab," "gear," "ginchy" and "grotty" were simply never in use in my part of the country (nor in Uslan's, I'd bet), plus I think some of them were used incorrectly even for whatever venue they were intended. ("Grotty," for example, is short for grotesque, and therefore a word denoting bad things, but Haney uses it as a synonym for "fab," "ginchy" and "gear," which presumably described good things.) The only reason I'm even vaguely familiar with such words is their occasional presence on the covers of my sister's Tiger Beat magazine in the early 1960s. By the late 1960s, such words had been replaced by "groovy" "outta sight," "right on" and the like.

But most of it is nonsense. Take this typical dialogue, where a college kid defends to Robin his right to Spring Break: "Listen, Boy Wonderful -- don't fink us out of havin' a good time! We're wild, wooly and full of gumdrops! We gotta live ... we gotta rumble! You, Little Boy Blue, had better believe that!" I had to read that twice to figure out what he was trying to say -- and I am intimately familiar with the slang in use at the time this book was published (1967). "Rumble," for example, was '50s slang that had long since gone out of use by '67, replaced by words and phrases like "bad scene" and "hassle." And who argues for the right to gang-fight/riot, which is what "rumble" implies? The rest of it ... well, I haven't any idea what phrases like "full of gumdrops" are supposed to mean, or why anyone would call Robin "Little Boy Blue." And "fink us out of a good time" seems like a malapropism -- the phrases Haney was looking for in 1967 were probably along the lines of "shaft us," "bum us out" or "bring us down." One can only conclude that Haney was just pulling random words out of his @$$ making things up.

I don't mention all this to ridicule Haney and Kashdan, who no doubt were doing the best "two hopelessly out-of-touch adults" could. But it must be said in any review, because this dialogue is so tin-eared, forced and plentiful that it distracts and detracts from the material as a whole, and can actually make the reading experience painful. It stops being amusing very, very quickly and then becomes a chore to wade through.

Similarly, the early plots revolve around what Haney and Kashdan imagined teen concerns to be. I doubt, for example, that there were protests against foreign-exchange students anywhere in the U.S. in the '60s, but one story is about exactly that. So the Titans are forced to solve an entirely made-up problem, which isn't really that hard. So not only are the plots not really reflective of teen concerns -- which in those days mostly revolved around drugs, sex and the terror of going to Vietnam and getting killed -- but rarely are these milquetoast plots really engaging. (Nor do the Titans perform particularly well, as powerhouses like Kid Flash and Wonder Girl are routinely stymied by common crooks.)

But then things change. Teen Titans #14 has three of the Titans suspect a fourth of something, whereas before the team had always gotten along with no friction at all. The next issue brings the Titans to a faux Haight-Ashbury, and an adventure with Hippies -- who are not necessarily depicted badly. The next issue once again has a "teen problem" -- but in this case the problem involves a hostile parallel dimension! By issue #18, the sea change from the Kashdan/Haney era is complete, as the story involves Cold War issues and could have appeared in any number of other titles. As Uslan says, "This may be the very moment the Teen Titans became the Titans."

The membership changed as well. The team had been static since their second appearance in Brave and Bold #60, but with the new writers the nearly useless and milquetoast Aqualad was replaced (without explanation) by Green Arrow's sidekick Speedy -- not only a more useful superhero in land-based missions, but one with an attitude.

Finally, the art changed as well. The art through issue #12 was mostly by the bland Irv Novick, saved only by the presence of inker Nick Cardy. But Cardy pencilled and inked issues #13-17 (minus #15, where he inked over Golden Age great Lee Elias), and the team never looked better (especially Wonder Girl). Someone named Bill Draut handled issue #18, but then we get the unusual pairing of Gil Kane and Wally Wood on #19, followed by Neal Adams and Cardy on #20! That's some awesome star power, and the work is just as good as you'd expect.

(The book is rounded out by a Titans/Batman team-up in Brave and Bold #83, which is written by Haney, but at least attempts --badly -- to stay with the times. That's likely due to the presence of youngster Adams, who often got involved in the writing of the books he illustrated.)

And all of it is not only welcome, but more true to the spirit of the times. As I've often said, comics reflect their culture, they don't create it. But in the late 1960s, DC was really falling behind, reflecting the 1950s and early 1960s more than the times in which they were being published. (As Uslan points out, Kid Flash is shown singing 1964's "I Want to Hold Your Hand" in an issue contemporaneous with The Beatles' release of Sgt. Pepper's Lonely Hearts Club Band. 'Nuff said.) Then a new wave of writers and editors came aboard -- such as Giordano, Friedrich, Wein, Wollfman and Denny O'Neil -- which at a stroke updated most of DC's line. Which had to keep being updated, because very few eras in American history were as volatile culturally as the late 1960s.

And nowhere was that more evident than the late-'60s Teen Titans, as this volume demonstrates.

Personally, the Haney issues were my favorite of the Silver Age run.  Yes, the dialogue was ridiculous, but that was part of the charm as well.  When the book took a more serious turn, it lost something in my opinion.

As I've said before, Bob Haney didn't necessarily write the best stories, but he usually wrote fun ones.

Good points, Randy, and I don't mean to presume my opinions are universal. And if you liked Haney's Titans work, more power to you. But I don't think Teen Titans would have continued to sell well in the late 1960s if it had continued down the Kashdan/Haney path, and therefore needed to change.

Without sales numbers from that time, it's hard for me to make a judgment.  That they chose to make such a decided departure in tone for the series suggests that management felt a change was needed.

That being said, I can say that IMO, the issues afterwards were quite dreadful, particularly the so-called "relevancy" issues.  While DC could be lauded for attempting to address the issues of the day, they usually did so in such a ham-fisted manner that it didn't seem to matter whether it was young people fresh out of college or longtime industry pros writing the comic--maybe the younger writers had a better handle on what was going on with young America at the time, but they weren't any better at utilizing that knowledge to tell stories that people wanted to read.

The fact that the series only lasted 43 issues says a lot too.  Whatever they were doing, it didn't appear to be really resonating with the comics buying public.

I'd say that, due to the many, often jarring editorial shifts of direction, the original 43 issues were more like several different series, all with the same title--I wonder if any of them would have been more successful if stuck with a little longer?  Sure, the "Super-Gear & Ginchy" Titans were only good for a bit of camp fun (and frankly, even more embarrassing to read at the time than they are now.), and the grey-uniformed Titans were well-intentioned but (as you say) ham-fisted.  Maybe more straight-up super-hero stories would have helped.  Maybe not.

Yeah ... even war titles like Our Army at War featuring Sgt. Rock and Sgt. Fury and His Howling Commandos, where everybody IS dressed alike in boring outfits in the same color, knew to make each character stand out visually anyway.

I liked the bomber jackets ... they did made the Avengers members look like they were on the same team.

Much of the out-dated dialogue sounds like it came from movies like The Wild One and the Edd "Kookie" Byrnes character from 77 Sunset Strip, which were probably their only frames of reference. The "full of gumdrops" phrase certainly sounds like it came from where the sun don't shine. This type of dialogue was what drove me crazy about Snapper Carr.