Review: The Origin of The Inhumans

Inhumans: The Origin of The Inhumans

This material is good enough to own more than once.

You see, I own everything found in this book already in various formats. I only bought this collection to get all that material in one place for research purposes. 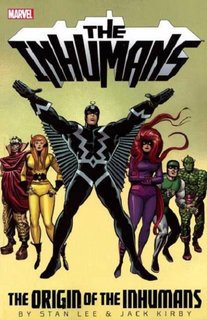 And when it arrived, I meant to only flip through it and refresh my memory on the origin of The Inhumans, who are about to be part of a major push at Marvel. But lo, no sooner did I read the first page than I was sucked in, and read it cover to cover. Even though I've read this stuff at least a half dozen times before!

While The Inhumans have never been the most successful of Lee-Kirby concepts, this book collects the Inhumans material from Fantastic Four #36, 38, 41-48, 50, 52, 54-65; Fantastic Four Annual #5; Thor #146-152; and Not Brand Echh #6, which comes from the most fertile and powerful period of Lee & Kirby's collaboration on Fantastic Four.

Which means it's good. When this material came out, the Marvel Universe was fairly small, and DC Comics were pretty tame. But what launched from Fantastic Four in roughly two years was the Frightful Four, the Silver Surfer, Galactus, the Black Panther, Prester John, the Negative Zone, The Inhumans -- and what the heck, throw in Psycho-Man and the beginnings of the Microverse, too. That's one heck of a run.

But as strong as the concepts were, the execution was just as good or better. These stories blend together and weave in and out to form one long narrative, with a pace that races breathlessly, relentlessly and irresistibly forward. You have to read them all at a sitting if that's an available option, because there's no organic stopping point -- and because you don't want to.

Now, admittedly, nostalgia may play a big role in readers of a certain age. (Koff, koff!) And some of it is clearly written by the seat of the pants; Medusa underwent a conceptual change (from bloodthirsty supervillain to sympathetic refugee) without an in-story explanation, and Lee initially called the Great Barrier a "Negative Zone" (a term he put to better use elsewhere pretty soon).

But I think the material holds up, and I don't have a problem recommending it to a reader of any age.

Even if you already own it!