Rise of the Superhero

I couldn't find any discussion on this topic, which kind of boggles my mind since this is EXACTLY the place where this topic should be discussed. But I blame myself since I've had a copy of this way-cool one-shot magazine since Christmas. It's called RISE OF THE SUPERHERO, and it's published by a division of what we used to know as LIFE Magazine. It's one of those hard-bound magazines that you see near the checkout lines in grocery stores or in other fine stores wherever cool stuff is displayed.

It's kind of a hybrid between those one-shots that are devoted to a single movie or series or subject (e.g., Star Wars, James Bond, Star Trek, the Beatles) and a history of comic book superheroes that blends into a discussion of movie and TV superheroes as well. But, it frequently veers off into political and historical discussions (plenty of stuff about Nazis and Red Scares and Viet Nam, etc.).

Given its LIFE Magazine pedigree, it naturally is chockful of photos, most of which you've probably never seen before, or certainly not recently (regrettably, they use the exact same photo of Lynda Carter twice, rather than finding another photo of her, but that's kind of a minor quibble). The book moves more or less chronologically throughout the 20th Century and into the 21st, though it takes a few wonky detours into politics that don't really make a seamless fit into the theme of superheroes, but you know, LIFE is sitting on a treasure trove of old photographs that they've already paid for, so I guess they felt obligated to milk a little more mileage out of them.

But the way-coolest thing of all, no doubt about it, is that our very own Mr. Silver Age himself, Craig Shutt, contributed the material for the Silver Age (though LIFE, in its wonkiness, seems to think the Silver Age ran from 1953-1972). Craig is our tour guide through the thrilling reenactment of how Julie Schwartz & Co. revived the Golden Age characters, beginning with the Flash, and then how Stan Lee and Jack launched the Marvel Age. Craig also contributes an article on the Comics Code Authority, and another one about Iron Man. As you can imagine, Craig does a great job, sharing with the huddled masses that same sense of humor and love of comics that we here have known about for a long, long time.

So my apologies for not mentioning this sooner. I urge everybody to rush out to their local grocer or bookstore and glom onto a copy of this. Or, you know, just buy it off Amazon. 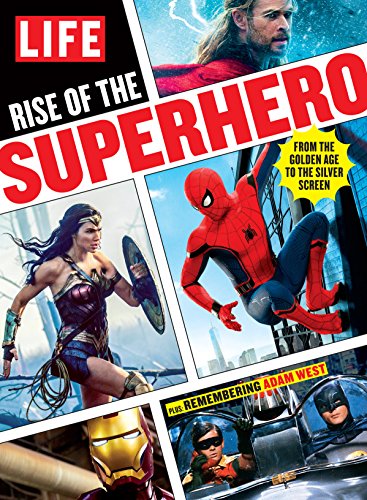 Thanks for noting it and for the kind words, Dave! I'm guilty of not posting about it, but there was significant talk about it on Facebook, as CBG's Maggie Thompson and John Jackson Miller also contributed.

Their concept was to show how popular culture was reflected in the comics, which was confused by their use of all TV and movie photos on the cover, but that's where the real interest is these days, so it probably got people to pick it up and flip. I was impressed they'd take a different tack and avoid the obvious one.

It was originally available at kind of second-tier magazine stands, like Walmart, Target and Walgreens. I don't know if it's still available, as these are fairly evergreen (but there are a lot of publishers that put them out). But the best part about mentioning it now with the Amazon link is that the price has dropped by about 50% since it first came out last fall.

Thanks, Dave! As you surmised I had passed this over since the cover makes it appear to be specifically about TV and movie versions of the super-heroes (I still use the hyphen). Now that I know that it includes work by Mr. Silver Age, I'll be looking out for it.

I do remember seeing this at Walgreens but I didn't look at it because the cover led me to believe it was about super-heroes on television and in the movies. Now that I know it's more comic book centric I'll keep an eye out for it.

Interesting that they don't include the very first comicbook superhero, Superman, on the cover.  And just a little over 10 years ago much of the non-comics buying public wouldn't have been familiar with either Iron Man or Marvel's version of Thor.

Into the 1970s Superman apparently outsold Batman, as DC put out more comics with Superman/Superboy. But for the time being that seems to have reversed.

Superman was the first great comic book superhero, but I think Nadir, Master of Magic from New Adventure Comics was the very first.

I was not able to find a copy at Kroger, Walgreens or Rite-Aid, but today I found a stack of them at Books-A-Million and grabbed one. I just glanced through it and found Craig's entries, and you bet I'll read those first.

Thanks again for the tip, Dave.

It sounds like a very interesting piece of memorabilia.  Sadly the Amazon sale isn't available in the UK, but, luckily for me, there's a secondhand copy available for sale on ebay's UK site.  I should have a copy by Tuesday!

Jeff of Earth-J replied to Jeff of Earth-J's discussion Tales to Astonish
"ISSUE #100: I recently covered this one from another angle. I wasn't all that thrilled with…"
46 minutes ago

Jeff of Earth-J replied to Jeff of Earth-J's discussion Tales to Astonish
"You're not wrong. Modern continuity has it that Banner's influence is always working…"
59 minutes ago

Peter Wrexham replied to Steve W's discussion A Cover a Day
"An unorthodox approach to providing blood for a transfusion."
2 hours ago

Commander Benson replied to Captain Comics's discussion Bond #4: 'Diamonds Are Forever'
"Man, the things you miss out on when you've been away for awhile! I finally took the time,…"
12 hours ago

Jeff of Earth-J replied to Jeff of Earth-J's discussion Tales to Astonish
""...neither the Hulk, Howard, you nor I made the world we live in." Like the petulant…"
15 hours ago