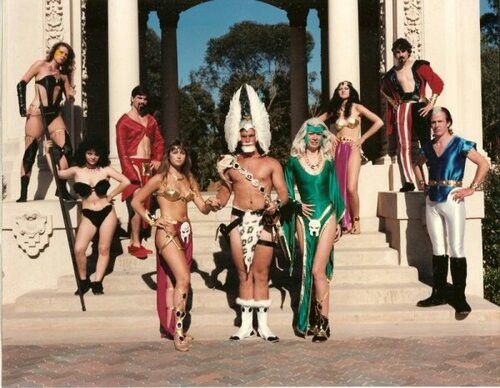 I've been meaning to get another Wardlord review up, and will, soon -- but I feel like this is also the place to note that Warlord is coming to Rebirth! In a story that starts in Trinity #17 (out in January), Superman, Batman, and Wonder Woman find themselves trapped in Skartaris. By issue 18, according to the solicitations that came out yesterday, Travis Morgan joins the fray.

So it looks like I'll be buying Trinity again for a while!

Wow, I still haven't gotten around to recapping Warlord #34...and I've read it twice!

And yet, I'm just chiming in now to say Trinity #17 was released this week, and as advertised, Superman, Batman, and Wonder Woman go to Skataris! We even see the ol' Disco Gladiator himself on the final page.

The story's by James Robinson, and the (gorgeous) art is by Patch Zircher. As for plot, not too much happens -- the three heroes are investigating a suspected dimensional portal, thinking it might lead Diana back to Themiscrya. Instead, when they get there they rescue a ship from being pulled in, but they wind up getting sucked into the vortex themselves...and find themselves in the lost world of the Warlord! The magic in the area means Superman has no powers...and for some reason, Wonder Woman has been struck blind. (She's OK though -- Amazons train in blindfolds sometimes.) The fight some lizard men  -- the same Lizard People who were worshipping Travis's plane as a god back in Warlord #3 -- and yep, his plane is still there, suspended by what I assume are crazy-strong vines. So they vanquish the lizard people, and meet the Warlord himself by the end!

One other heartening detail -- Batman IDs the plane as an SR-71 fighter jet, which he notes is "at least Vietnam-era." So there's no unnecessary update here -- Travis is still a Vietnam vet! I'm very happy to see this; there's no reason to update him to someone who served in Iraq or whatever. Time moves differently in Skataris!

So that's it! Let's see whether I get to Warlord 34 (sitting only five feet to my right at this very moment) before Trinity 18 comes out!

Randy Jackson replied to Jeff of Earth-J's discussion Swamp Thing
"I personally found the story of these two issues not to be very interesting, but what I did really…"
16 hours ago