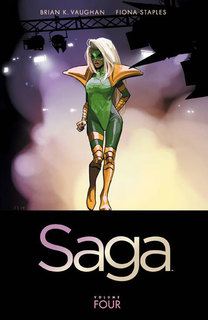 The action picks up here with baby Hazel as a toddler, as promised by the ending of the previous volume. The family is undercover: Marko is a house husband (who wears bandages outside of the house to avoid recognition), while Alana makes a living acting on a television soap opera (which is where the cover image comes from).

The Robots take center stage for much of this arc. Prince Robot IV is still on Sextillion in a brothel when his wife gives birth. He doesn't learn he's a father until his wife has been murdered and his son taken hostage by a terrorist. The terrorist engages in a string of casual violence, killing just about everyone he comes across. There's a wonderful visual when the Prince visits King Robot: the King's head is such a huge monitor that a two-page splash page is required to show the whole thing. Staples has a lot of fun with the Robot monitor heads all the way through, as they display images showing how they're feeling or what they are going to do.

Things have been going badly between Marko and Alana. She kicks him out of the house, and he comes back just in time to see their house/spaceship take off, with his family hostages to the terrorist. Meanwhile, Freelancer The Brand comes to writer Heist's planet seeking The Will, and we meet another cute alien creature from Staples. It's a seal in overalls named Ghüs (apparently not pronounced "Goose"). We'll probably be seeing him for awhile, because Prince Robot and Marko show up, seeking his help to track their families.

This series is still a really fun read, despite the massive amount of violent death in this collection! I suppose it's more cartoonish when we don't know the characters beforehand.

As you say, this is still a great read and the art is always delightful (even when violent).

I've still be enjoying it myself. I'm slowly getting caught up on my comics, and I think i got to where this collection ends.

Like Travis, I've got a lot of catching up to do.  This is on my to read pile (AKA "The pile o' shame").  Saga is one of the very best comics out these days.