Sherlock Frankenstein and the Legion of Evil 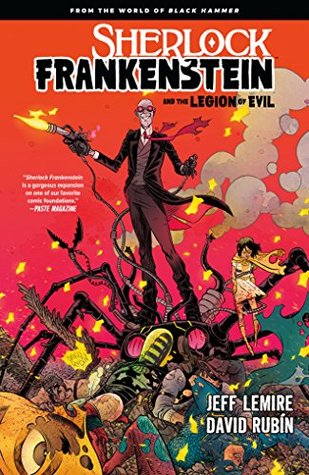 Despite the title, this prequel set in the Black Hammer Universe is mainly about Lucy Weber uncovering the truth about her father, the Black Hammer. The opening is Black Hammer #12, set ten years ago in Spiral City, which shows the memorial service for Black Hammer and the other heroes who defeated Anti-God. Lucy is proud of her father, misses him, and resents the fact that her mother won't let her acknowledge him. She's convinced that the heroes are not dead, and so is retired hero Doctor Star: when she becomes an adult he gives her a message from her father, which contains and address and a key. There she finds the Hall of Hammer, her dad's secret hideout.

His recorded message tells her to destroy the place and forget about the Black Hammer. But she doesn't believe he's dead, and is determined to find him. The search leads her to Spiral Manor, home of many of the supervillains her father fought. And Sherlock Frankenstein is the biggest and baddest of them all. In the course of her investigation she learns that the relationship between the superheroes and supervillains was more complicated than she thought. Sherlock had a relationship with Golden Girl, and may have been on his way to help the heroes in their final epic battle. When she finally tracks him down, he resists her inquiries--than apologizes and promises to do something about the current lack of heroes in Spiral City. Great potential for future stories.

David Rubín's art style is different from regular series artist Dean Ormston, but it is compatible, and he makes an effort to stick with existing character designs. He also gets to create some of his own, all of which is explored in an extensive Sketchbook section. He apologizes for the heavy usage of double page spreads in the fourth issue. There are a lot! The whole collection is a delightful expansion of the main series. It's a blast to read, even for an ex-superhero comics reader like me.