My first Avengers story was Marvel Triple Action #22 (N'74) which reprinted Avengers #28 which was the return/debut of Henry Pym as Goliath. I commented on this at Mister Silver Age's forum. In a nutshell, Pym can only stay giant-size for fifteen minutes, didn't include a timer with his new outfit and became stuck at ten feet tall! The next part from MTA #23/Avengers #29 by Stan Lee, Don Heck and Frank Giacoia was just as memorable and a personal favorite.

Another wonderful Avengers tale with all the characters, good and bad, getting a chance to shine. It's standard Stan Lee melodrama but it does broaden both Hawkeye and Goliath's personalities. Hawkeye is forced to mature a bit and Goliath gets to chew the scenery in a couple of spots.

A great issue in an amazing run of my favorite Marvel title! 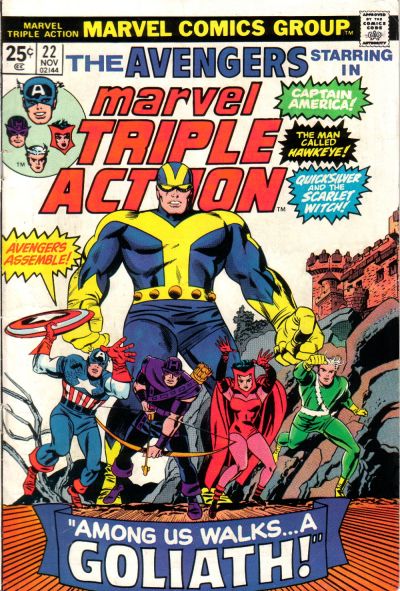 Just to catch the eye of the casual punter.

Goliath's tragedy was perhaps Marvel's shortest-lived ones as he soon regained his size-changing abilities, had his longest run with the team and his girl-friend would become a millionnaire!

And I always loved "The Man Called Hawkeye" byline! They should have named a series after that!

Yep, I was an avid reader even at nine! I must have read about 8 or 9 Marvel Triple Actions before my first proper Avengers, which was #129 (the start of the Celestial Madonna saga) but didn't get another one until #137!

So I still thought of Goliath and Quicksilver as major Avengers!

Probably not coincidentally, #35 was the first issue that Roy Thomas was involved with. Stan "edited" the issue, while Roy "scripted" it, which probably means they plotted it together.

It's likely that Stan liked the idea of the all the woe-is-me dialogue he could give Hank, whereas Roy liked the flexibility of changing his size.

BTW, I've started seeing photos from the Avengers movie, like these from Entertainment Weekly. They're not showing too much yet, but it's looking pretty cool. 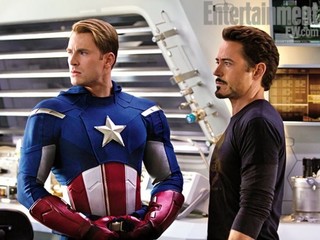 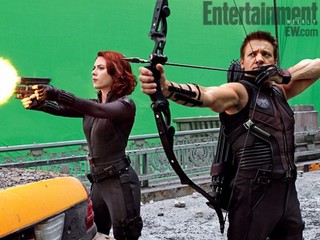 I saw pictures of them filming in NYC. That plus the coming attraction got me geared for next year!

I thought that I read a rumor about a lower budget Ant-Man movie but I guess it didn't happen. Could Ant-Man/Giant-Man and the Wasp be feasible in a live action movie? It's too bad that they're absent but Hawkeye and the Black Widow are more practical characters. Odd that Natasha is now considered an important Avenger considering that she was always a guest star in the Silver Age and when she did join officially in #111, she left in #112!

Poor Hank Pym, though. He's finally the muscle (as much as he could be) of the team then Roy brings in Hercules!

Ah, would I be nit-picking if I claimed that it (Avengers #28) actually came out in May 1966, when I was ten years old, and learning how the spinner rack worked?

That's when Hercules joined, even though he left in #50 but the Widow remained a "guest" for the rest of the Silver Age, not officially joining until she and Daredevil helped the Avengers against Magneto. DD turned down their offer then.

While I was busy crossing the T's and dotting the I's to my response, Philip beat me to it.  He is correct.

The idea that the Black Widow was made an Avenger in The Avengers # 45 (Oct., 1967) is such a common misconception that I double-checked, just to make sure that I hadn't missed something, when I did my two-part Deck Log Entry a year and a half ago.

On page 8, panel 3 of The Avengers # 45, Goliath announces that Hercules has been awarded Avengers membership.  Pym makes it a point to mention that the Black Widow would have been tendered membership, as well; however, she had announced her retirement from super-heroing.  (I've included the panel below.)

Natasha herself confirms her retirement in the following issue.  It didn't last long, but she was inactive long enough to miss her first chance at Avenger-hood.  She grabbed it the second time around, though---in The Avengers # 111 (May, 1973), as Philip stated. 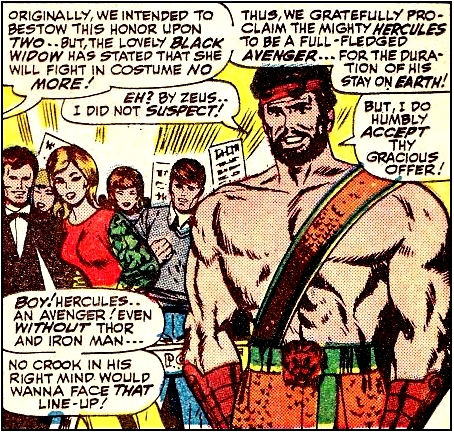 The Black Widow did indeed grab for membership the second time around in Avengers #111 but she released it soon enough in Avengers #112 to head back to San Francisco and Daredevil. But the Avengers got their romantic couple in #114 with the Swordsman and Mantis!

Ah, well and good.   I guess I hadn't read it close enough.  I know there was something with the Red Guardian about that time as well.

By the way, considering the number of times that the Swordsman has tried to kill Captain America (in #19-20, probably in 28-29, etc... including something around 65 with egghead about the time Goliath II came on the scene)  how is it that he became a member? Or, was it the whiles of that manipulator Mantis that turned his head?  Inquiring minds want to know.

The Black Widow did indeed grab for membership the second time around in Avengers #111 but she released it soon enough in Avengers #112 to head back to San Francisco and Daredevil. But the Avengers got their romantic couple in #114 with the Swordsman and Mantis!