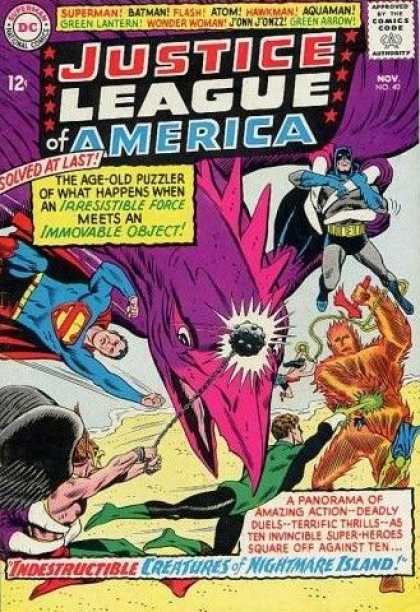 I first read Justice League of America #40 (N'65) "Indestructible Creatures of Nightmare Island!" by Gardner Fox, Mike Sekowsky and Bernard Sachs when it was reprinted in JLA #115 (F'75). It was a very odd comic when I was nine but now I realize how deep it truly was.

The oddest thing is that the JLA is NOT the only protagonist in the story. They share it with the pacifist ANDREW HELM who makes his first and only appearance here. But he gets a very detailed origin as he as a four year old son of American explorers who are killed by bandits led by the merciless Chung Ka in Tibet in 1900. However the child is saved by the lamas of the hidden city of Ta Ming, protected by a force field that renders it invisible much like Gorilla City. The boy grows to manhood in the sacred golden city, studying its accumulated knowledge and learns the art of astral projection. However after serving seventeen years in prison, Chung Ka, leading a hoarde of bandits, digs under the barrier and ransacks Ta Ming and leaves no one alive, except for Andrew who survived the second cataclysmic event of his life.

In the present, the now-sixty-nine year old Andrew lives on an island between New Zealand and Australia which is surrounded by the same force field. To save mankind, he builds the Corti-Conscience Machine (CCM), a device that will make everyone act good! He activates and astrally observes the results. Mirror Master and the Shark apologize to the Flash for robbing Central City. An unnamed Fidel Castro stops his nuclear attack on America. The Penguin and Captain Cold repent and surrender to Batman. All violence ceases in Viet Nam.

Superman, Wonder Woman, Aquaman and Green Lantern gather with Batman and Flash, puzzled over this turn of events yet plagued with doubt. It seems too good to be true. And it is. Andrew Hel was so overjoyed by his success that he stayed in his astral form too long and can now no longer return to his (now deceased) body! Without him to make constant adjustments, the CCM will overdose humanity and their consciences instead of being augmented will be deadened!

As news of increased hostility reaches the Secret Sanctuary, Superman rallies the others to protect the world from itself only to be shocked by their apathy toward the coming conflicts. Batman even says "If people want to fight and rob and oppress other people, we cannot impose our wills on them! They have rights, too, you know!" The Man of Steel quickly realizes something's wrong with his teammates and wants to use GL's power ring to counter the effect since our deus ex kryptonian is unaffected. Instead of having to fight Green Lantern for his ring, the Emerald Gladiator nonchalantly tosses it to him! Curing them, they realize that some kind of radiation has corrupted the world.

Superman destroys armaments and disperses troops, Green Lantern eases nuclear missiles and Wonder Woman topples dictators! Meanwhile Batman, Aquaman and the Flash find where the radiation is coming from but they can't see anything there so they call for reinforcements: the Martian Manhunter, Green Arrow, the Atom and Hawkman. But they can't see any source, either. Nor can Superman, Wonder Woman or Green Lantern. Luckily for them, a pod of porpoises are seen swimming around...something. Aquaman learns that they can see the island so Green Lantern projects what they see!

As the JLA try to explore the mysterious island, they are repelled by the force barrier. The Flash matches his vibrations with the field and acts like a living door! After walking through their teammate, they approach Helm's house only to be attacked the "Nightmare Creatures" and are nearly beaten in a panel or two. Hawkman tries to get some seabirds to help him with his menace, only for them to tell him that there's nothing there! The Winged Wonder tells the others that their opponents are hallucinations and they are free! They shut off the CCM and it implodes. They find the body of Andrew Helm and preach and moralize over it. They reseal the island as the ghost of Andrew Helm chalks this one up to experience!

Next: Point by Point!

What do you Silver Age fans think?

I think Andrew Helm should re-appear! In a manner of speaking, since appearing is something he can't really do. He'd also probably be nutty as a fruitcake.

The first thing that struck me about "The Indestructable Creatures of Nightmare Island" after I bought it at Koplin's Drug Store was the fact that it was one of the infrequent stories to include the entire Justice League line-up after Gardner Fox had shifted to his final "rotating membership" formula.  I had gotten used to JLA adventures featuring only five or six members by then.

This was one of Fox's more thoughtful stories, as shown by the amount of page-space he devoted to just setting up the premise.  The Justice League doesn't even come on stage until Act Two.  I didn't mind that (although, as a consequence, Our Heroes kind of got short-shrifted on the action) because it gave the plot a certain gravity.  It also helped that this was a completely Earth-related adventure, with no aliens or alternate dimensions or sidereal worlds.

The detailed build-up also made it easier to accept the story for what it was---a morality play.  At this point in Fox's history with JLA he would present one of these every so often.  Perhaps the most notable of these was "Man, Thy Name is---Brother", from JLA # 57 (Nov., 1967).  That one earned a lot of fan praise, but frankly, it was considerably more heavy-handed than "Nightnare Island".

"Man, Thy Name is---Brother" had "Look, we're trying to teach you something!" written all over it from page one.  "Nightmare Island" saved its moralising for the last page, with a less-obvious but no less important lesson---you can't impose goodness and decency on man; it has to come from within each one of us.

Especially in light of modern-day fan attitudes, one of the more fascinating plot details in "Nightmare Island" is that Aquaman's power to communicate with sealife and Hawkman's ability to talk to birds---two powers which receive considerable amount of ridicule by current generations of fans---were instrumental in the League's victory.

Frankly, the time has long passed for Andrew Helm to reäppear.  I shudder to think what a modern comics-writer, in the popular trend of taking everything to the dark side, would do with him.  As Cap said, Helm should probably be a regular nut job.

But if Fox had brought Helm back, I don't think he would have gone to that extreme.  Fox's Helm would have held on to his sanity and still maintained his ideal of world peace.  I'm not big on encore performances, but I would have liked to see Fox take another shot with the character.

There's a similar bit in Showcase #61, one of Fox's Spectre stories, but there the figures mentioned are Moses, Peter, Buddha and Mohammad. I liked those bits as a kid. The Spectre's foe in the Showcase issue is called Shathan, but he's clearly supposed to suggest Satan: it just occurred to me that the issue predates by a couple of years Mephisto's introduction in Silver Surfer #3. The Spectre's foe in #60, which story I don't have, was a more dapper demon called Asmodus (from Asmodeus).

The concepts of a Tibetan utopia and/or monastic order that possesses higher knowledge were in place by the 30s, but I'm not sure how far back they go. The former concept may stem from James Hilton's 1933 novel Lost Horizon, which concerns a utopian community in Tibet called Shangri-La. The film version was directed by Frank Capra, and was a major hit of the era. The concept of Tibetan wisdom already played a role in the Theosophy movement in the 19th century.

Centaur's Amazing-Man had super-abilities resulting from his training by Tibetan monks. He was created by Bill Everett and first appeared in 1939. The late Don Markstein noted that the origin of Pete Morosi's Thunderbolt copied Amazing-Man's. Iron Fist's K'un-Lun was other-dimensional but in some sense in the Himalayas. According to a footnote to Wikipedia's article on Amazing-Man Roy Thomas said on the letters page of Marvel Premiere #15 that his origin was the inspiration for Iron Fist's. In Mandrake the Magician Mandrake learned his "magic" (hypnotic and psychic skills) at the College of Magic in Tibet, but I don't think that was established until 1949. Dr Strange learned his magic from the Ancient One in Tibet. Deadman's series in Strange Adventures introduced a utopian Tibetan community called Nanda Parbat.

Andrew Helm was given a very "super-hero" origin, complete with murdered parents and the "American-in-Hidden-City" motif. If not for his age, he could have been "Doctor Mystic" or something.

Gardner Fox gave the key spot of figuring out what the Indestructible Creatures really were to his favorite, Hawkman despite his late entry into the story. It could have easily been Aquaman uncovering the truth!

I really like the Commander's assessment. It rings very true.

Luke, as usual, adds his thorough and academic approach to the situation, and names many of the the Western characters that derived from the idea of Great Wisdom in the Himalayas. Add to what he said the Green Lama and The Shadow. There are probably dozens more, major and minor, in Western fiction.

I don't know where it all started, either. Maybe Haggard's She? Keep in mind that the idea of "Eastern hordes" taking over the world was also a popular idea/prejudice in the '30s. The Himalayan wisdom thing was clearly divergent from that idea, and maybe its flip side.

I listened to the Librivox versions of She and its first sequel Ayesha: The Return of She last year. She is set in Africa. In Ayesha the English protagonists from She find Ayesha in a new body as a priestess-ruler in Tibet. In both stories Ayesha has secret knowledge, but the communities over which she rules don't share it and aren't utopian. I understand Talbot Mundy wrote stories set in India and Tibet and had theosophical interests, but I haven't read any of his work.

I think belief in Eastern wisdom stemmed from a combination of respect for the achievements of Asian cultures and dissatisfaction with Western scientific materialism and Christianity. Western knowledge of Asian history, religion and literature had enormously expanded in the course of the 19th century. The Aesthetic Movement was associated with admiration for Asian art. Notions of the higher wisdom of past ages, of esoteric wisdom, and of the wisdom of the East (anywhere from the Near East to China) have long histories in Western thought, going right back to Classical times. I'm currently listening to Zanoni (1842) by Edward Bulwer-Lytton, the hero of which is an initiate of esoteric knowledge who has been alive since ancient times.