I somehow only recorded the first of the two episodes that were broadcast. Maybe I can find them online somewhere, and then binge the remaining 14. Next week is a skip week* for most of the CW shows, so that would be a good time.

Star Trek: Discovery season 1 is being issued on DVD in mid-November, so it should be available for rental in the near future.

Season one of Star Trek: Discovery shipped Tuesday and we watched the first two episodes last night. I’ll tell ya… I had a difficult time extrapolating the technology/ship design from Enterprise forward to the technology/ship design on the original Star Trek; I’m having an even more difficult time in regard to ST:D. [”STD”? that’s the first time I typed that. Did they think that through?] And the Klingons! Enterprise did a good job of explaining how and why the Klingons changed appearance from the era of Captain Archer, to the era of Captain Kirk to the era of Captain Picard. But these Discovery Klingons look more like Ogrons. I don’t really have a problem with those things, though, because I think of this show as a reboot (in much the same way I think of the Star Wars prequels as a reboot of that franchise). That explanations dismisses all of the inconsistencies.

By the time the show opens, the Captain Geordio (Michelle Yeoh) and First Officer Burnham (Sonequa Martin-Green) have already been serving together for seven years. That’s the equivalent of the entire ST:TNG series! The second episode shows a flashback to how they first met, but when Burnham goes all “Captain Kirk” on the Klingons’ ass, the plot is taken to the logical conclusion we’ve never before seen on any Star Trek show: they don’t complete their mission, the captain is dead and Burnham ends up serving a life sentence in prison.

This is either the shortest Star Trek series on record, or they going somewhere different (dare I say it?) with this show. I’m intrigued.

It gets better and better. You'll see.

I’m six episodes in and… so far… the show is just not clicking with me.

I like it, but I’m not loving it… at least not yet.

First, it is becoming increasingly difficult for me to reconcile Discovery continuity with TOS continuity. Every single episode presents further evidence why this series cannot be part of the original series’ universe. As I indicated before, though, that’s not a problem for me. I just think of it as a reboot, like the current movies. (I can see it being part of the rebooted movie series continuity.) I just don’t understand why the producers insist it is canon with TOS.

Second, Gene Roddenberry would have hated this series. That’s not a show-stopper for me, either; Roddenberry often demonstrated [what I see as] a series of missteps in the handling of his own franchise. Roddenberry’s vision was of a future in which human beings worked together, and all conflict came from without. I’m not necessarily saying I agree with that, I’m just pointing it out. There are very few characters on Discovery (apart from Burnham) that I even find likeable. (That POV is slowly changing as I get to know them better.)

Michael Burnham is a much better character than Sasha Williams (The Walking Dead) was for Sonequa Martin-Green; it was a good career move for her to take the part. I was given to believe that Michele Yeoh was the captain in this series, but [SPOILER] she was killed in the second episode [END SPOILER]. I keep waiting for something to happen to reverse that (and also perhaps account for the discrepancies from canon), but I no longer think that’s going to happen.

I’ve been trying to avoid spoilers, so please give me a few more weeks to catch up before responding in detail. I’ll let you know.

You find will that the series gets better and better as it goes on. As for Michele Yeoh, I don't want to spoil it for you, but......

Last night we watched the mid-season finale. The conversation with my wife went something like this. [SPOILERS for those who have not seen it.]

“Okay, I think I see where this is going now. They introduced the idea that the spore drive may lead to alternate realities. Everything we have seen so far must take place in an alternate reality. That would account for all the discrepancies. I’m okay with that.”

“If that’s what it takes to make you feel better.”

“What do you do to feel better about it?”

Permalink Reply by The Baron on November 28, 2018 at 12:37pm
I've not seen any "Discovery", but as far as I'm concerned, you can make a case for their being as many as eight "Trek" continuities:

1)The First Pilot: Not really consistent with anything that came after it, despite the original series' attempt to make it canon.


2)The Second Pilot: Also not perfectly consistent with what came before or after it. This is the timeline where Kirk's middle initial is "R". ;)

3)The rest of The original series. TOS wasn't always perfectly consistent with itself, but I have to draw a line somewhere.


4)The "original series" films: Look closely, and there's some serious discrepancies between these and TOS.


5)Star Trek: The Next Generation/Deep Space Nine/Voyager/the "TNG" films: I decided early on that TNG didn't mesh well with TOS, but these are all reasonably well interconnected with each other.

6)Enterprise: I gave up on this fairly eatly, but I've seen enough to be reasonably certain that it doesn't mesh well with the otherd, either.

7)The "reboot" series of films: As far as I'm concerned this was an alternate timeline, even before that Romulan fellow whose name escapes me at the moment starting mucking about with it.

8)Discovery: Everything I've heard about this sounds like it's yet another timeline.

We watched two episodes last night. [<b>SPOILERS</b>] The Discovery was in the "mirror universe" (or an alternate mirror universe?) for both of them, and will be for at least one more. Michele Yeoh is back as the emperor.

Watched two more episodes last night. They spent four episodes in the mirror universe but now they have returned to their own, nine months later than when they left. Things have changed.

[SPOILER] There is a HUGE twist in the third episode they spend in the mirror universe. IU’m not going to tell you what it is; the “spoiler” is that there is a twist, one which casts the entire first half of the season in a new light. There’s are two pretty sizable twists in the episode after that, too, one I saw coming (and hoped it would). We have two episodes left to watch, then I’ll go back and read some of the earlier posts to this thread I skipped before.

I get this now: 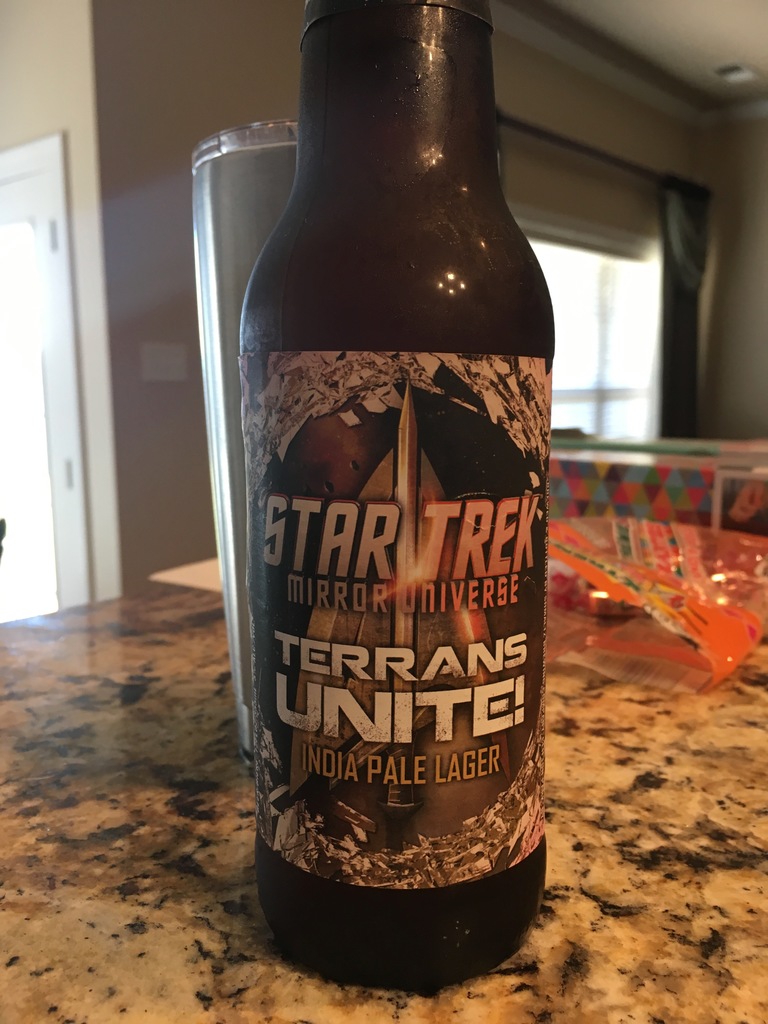 We finished season one over the weekend and it never really did click with me. That is to say, I liked it, but I didn’t love it. Every Trek franchise seems to me to to be getting a little further from the original premise. Consequently, I liked Discovery somewhat less than I did Enterprise. I even prefer the rebooted movie universe because it comes right out and says it’s an alternate reality. Discovery obviously is, too, but nothing in the series makes it canon; it’s as if the showrunners are trying to cash in on the original series cache. I will be watching the second season when it comes out on DVD, but I won’t be subscribing to CBS All-Access.