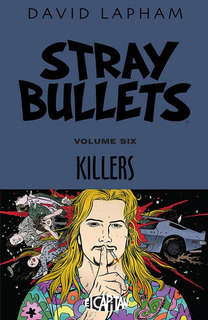 The original run of Stray Bullets ended in 2005. When David Lapham decided to bring it back in 2014 he chose to publish the new issues as a series of titled miniseries--but the collections are numbered consecutively from the beginning. That's how this new eight-issue miniseries came to be collected as Volume Six. The good news is, Lapham has not lost a step. These stories have all the twisted glory the originals had. This is a unique voice in noir fiction, a dark look into frequently desperate, violent lives. Black and white art has never been more appropriate.

Over time the series developed a group of recurring characters, a few of which reappear here. Seeing Virginia Applejack, Spanish Scott, and Amy Racecar again has a nice resonance for returning fans. But it really is true that this series is completely new-reader friendly. You don't have to know any of the character's histories to follow the action.

The first issue is set in 1978 and features Spanish Scott being his usual charming, ruthless self. But it also introduces Eli as a boy, and shows how meeting Scott affects his life. The focus of most of the rest of the series is on Eli's budding relationship with Virginia in 1986. Virginia meets Eli after her time in Baltimore: the gangsters she met there come to dominate the rest of the story.

There is one interlude in the story arc. Issue Five features the return of Amy Racecar. As usual her story has an unreal, hallucinogenic quality. She's like a real-world superhero, performing superhuman feats. In this story she decides to leave violence behind, but passes her skills along to her lover. And Spanish Scott appears in the role of bounty hunter Jack Rum.

Eli and Virginia fall in love, but the relationship is anything but smooth. Getting in the middle of a gang war would be complicated for any couple. They break up, get back together, break up again...and then survive an attack by professional hit men, but the final status of their relationship is unclear at the end. Knowing Stray Bullets, I'm sure we'll see them again.