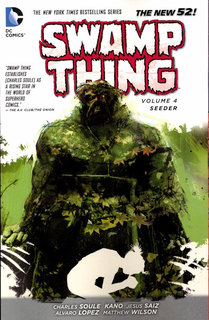 New writer Charles Soule opens this collection with what feels like a fresh introduction of the character (especially after the interminable Rotworld story line). The first two issues are real old school Swamp Thing. They start with Swampy ruminating about his role, pretty low-key. He visits Metropolis and inadvertently causes a crisis--triggered by visiting Batman villain the Scarecrow--bringing Superman into the story. Swamp Thing finally asks Superman his question: with all your powers, how do you retain your humanity? Superman replies "I connect. I find people to help. It's our choice, Alec...We can be as human as we want to be." It's a lovely moment.

Soule then introduces his first new character: Capucine, an ancient warrior who was once promised sanctuary by an earlier avatar of the Green. This gives Alec a reason to go into the Green to find out about the promise. It's an interesting bit of history, but he immediately turns his attention to the title character Seeder, who has been disrupting the Green by forcing things to grow where they are not supposed to, pulling power from elsewhere in the Green every time he does it.

He follows Seeder to Scotland, where a village has been gifted with a tree that grows whisky. John Constantine is there as well, drawn by the magic. When he falls under the spell himself Soule spins a classic Swamp Thing/Constantine tale, only this time it is Swampy's turn to save Constantine. Returning to the swamp he finds Capucine recovering from an attack by Seeder, who had come looking for him. I'm sure we'll be seeing a lot more of both of these new characters.

The final issue in the collection (23.1) is part of the Forever Evil event, and is devoted to arch-villain Anton Arcane. Abigail Arcane (who became the new avatar of the Rot in the previous story line) visits him in Hell. She is seeking the truth about her mother, and gets more than she bargained for. The final scene implies that Arcane has escaped from his prison, surely the biggest loaded gun any Swamp Thing writer could conjure up.