I've discussed why I like this character here.  We'll start with her first appearance:

OK, as I've noted before, I've never read any Silver or Bronze Age Gwen Stacy stories, so I don't have the connection to the character that a comics just a few years older than I am might have. An older reader might say, "This isn't my Gwen Stacy!", but I won't have that.

The writer is Jason Latour. By and large, I have no beef with the writing. His dialogue occasionally smacks of "the way these kids talk today".

The art is by Robbi Rodriguez, with colors by Rico Renzi. The art is basically OK. Rodriguez does tend to draw George Stacy with a huge forehead, as though he were about to mutate into the Leader. I like Gwen's costume, similar to Pete's, but different enough that it has some originality to the look.

We're shown that Gwen is drummer for a rock band called the Mary Janes.  MJ is the diva-ish lead singer/lead guitarist,  an African-American girl called Glory (Grant?) is the keyboardist, and a dark-haired girl who is not named is the rhythm guitarist. They are seen practicing a song called "Face It, Tiger".

We get a flashback explaining some of Gwen's history:  She was bitten by a radioactive spider, gained spider-powers, and became the entertainer "Spider-Woman".  Peter Parker, wanting to become special like her, becomes the Lizard, and ends up dying in her arms. J. Jonah Jameson starts a campaign against Spider-Woman, accusing her of murdering Peter. Gwen feels responsible for Pete's death, but not in the way that Jonah means it.

Meanwhile, Captain Stacy is in charge of the police effort to catch her. The police are hot on her trail. We cut to Matt Murdock - who on this Earth is a crooked lawyer working for the Kingpin, which I thought was an interesting twist - having lunch with a muscular, grey-skinned comedy Russian called Aleksei (This world's version of the Rhino?), and sending him knock off George Stacy, in hopes of winning over Spider-Woman.

Aleksei attacks George at a Mary Janes concert, which Gwen is late for.  She beats up the somewhat confused Aleksei, but George gets the drop on her.  She unmasks, and explains to him why she became Spider-Woman.  He weakens, and lets her go. All this is observed by the British Spider-Man, leading into the Spider-Verse storyline.

Overall:  An interesting first look at the character. She would play a fair part in the Spider-Verse story, but I'm not going to get into that here, as I hope to give that story its own thread at some point. 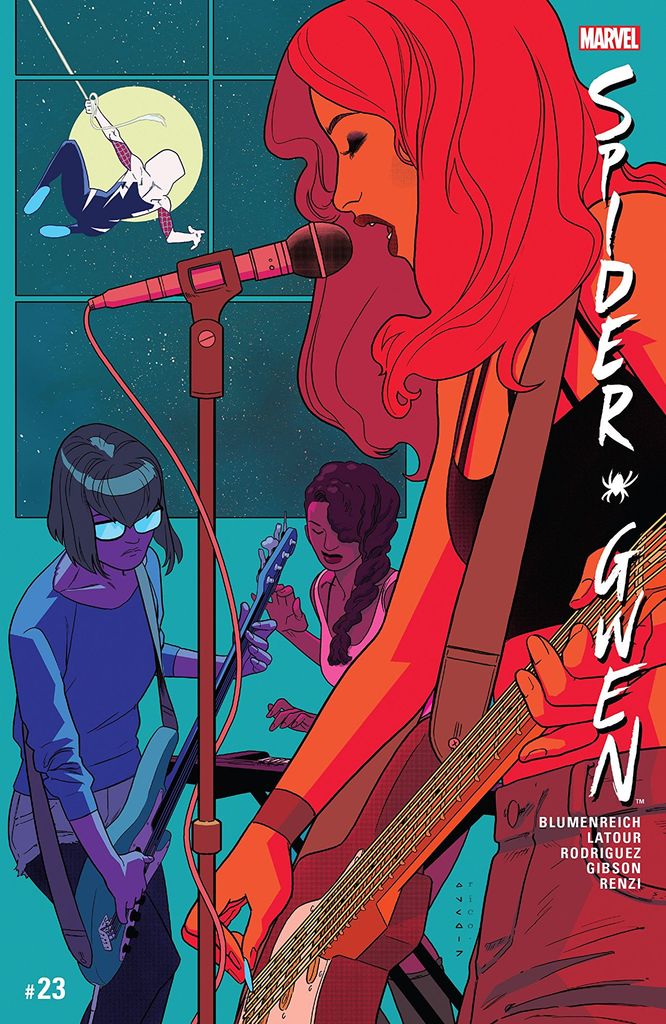 We start with a few pages of weirdness from Latour and Rodriguez as the watching of Earth-65 is chided by his superiors for goofing off.

Then we shift to Blumenreich and Gibson giving us the story of what the other Mary Janes are up to while Gwen is off trying to save Harry.  We see the three of them dealing with MJ's personal drama as they prepare to do a show without Gwen.  MJ gets in some fighting of her own when she knocks out a would-be "boyfriend" who assaults Betty.

Overall:  A good issue. The Blumenreich/Gibson suits the story well, and its fun to see what the girls are up to while Gwen is away. It's an interesting choice to devote an issue to back-up characters  and leave the ittle character out pretty much entirely.  I'd give an Blumenreich/Gibson "Mary Janes" book a chance. 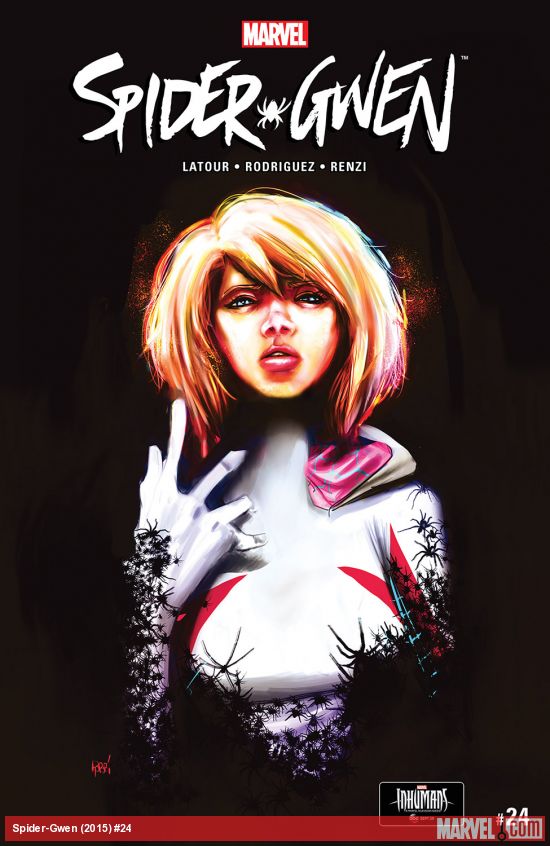 A mostly all-battle issue as Gwen and Kitty work to free Logan from the Venom symbiote. Gwen takes the symbiote onto herself and confronts Murdock, who tells her about the attack on George. Gwenom races to her father's hospital room,and swears vengeance on whoever hurt him.

Overall: Another good issue.I'm not a big Venom fan, but the concept is used to good purpose here. 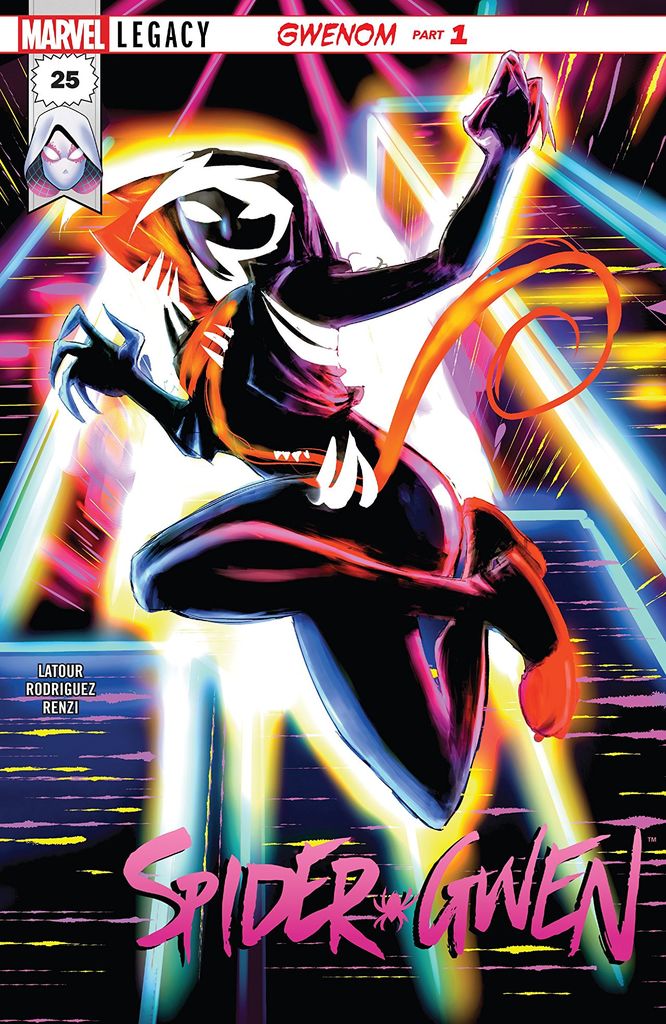 Gwen hunts for the Rhino, while the Parkers and the Mary Janes seek to help her. Murdock feeds her the Rhino's location, but Castle shows up and attacks the Rhino, instead. Gwen is left knowing that she would have killed him if she'd had the chance, and determines that she must get rid of the Venom symbiote.

We also get a Venom (a.ka. "Gwenom") guidebook page, and a short re-telling of Gwen's origin, written by Robbie Thompson, with art by Mark Bagley and John dell.

Overall:  I have to give this book credit, it takes concepts and characters I was never wild about ( Venom and Matt Murdock spring to mind) and makes them interesting. 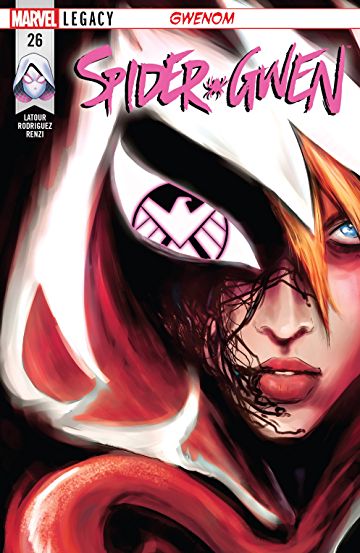 Gwen comes close to brutalizing the Bodega Bandit, but restrains herself at the last minute.  Elsewhere, Jean DeWolff is looking for her.  With Reed's help, Gwen infiltrates a SHIELD prison to seke advice form Cindy Moon, who advises to let go of hating Murdock. While there, Gwen offer to free Felicia Hardy, who has given up. The Parkers and the Mary Janes join forces to search for Gwen. At SHIELD HQ, the Falcon is grounded, so he asks Cap to look for Gwen.Cap is already on the case.

Overall: Still good stuff, but I won't be sorry when the Gwenom/Murdock storyline is over. 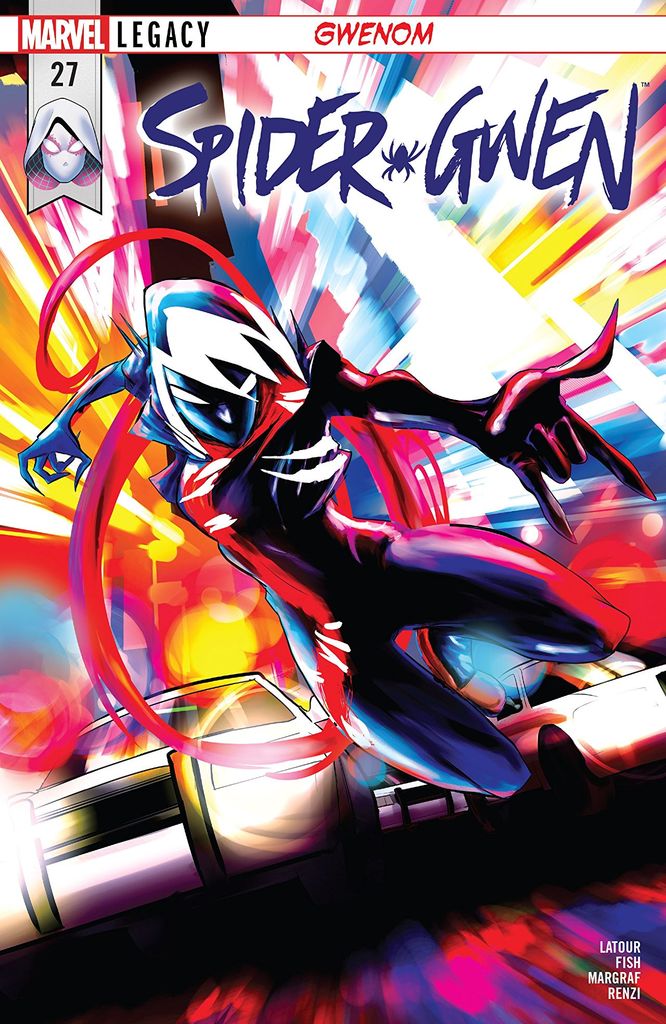 Gwen terrorizes the cop who let the Rhino at George. Frank confronts her and encourages her to team up with him against Matt.  Foggy sells the crooked cop out to Matt.  We end with Gwen revealing her secret identity to Ben Parker.

Overall:  It's interesting comparing these stories to the Silver/Bronze Age Spider-Man stories I've been reading lately. I often felt that Peter's life would have been much easier if he'd just been open with everyone from the start. I guess we're about to see how that goes for Gwen. 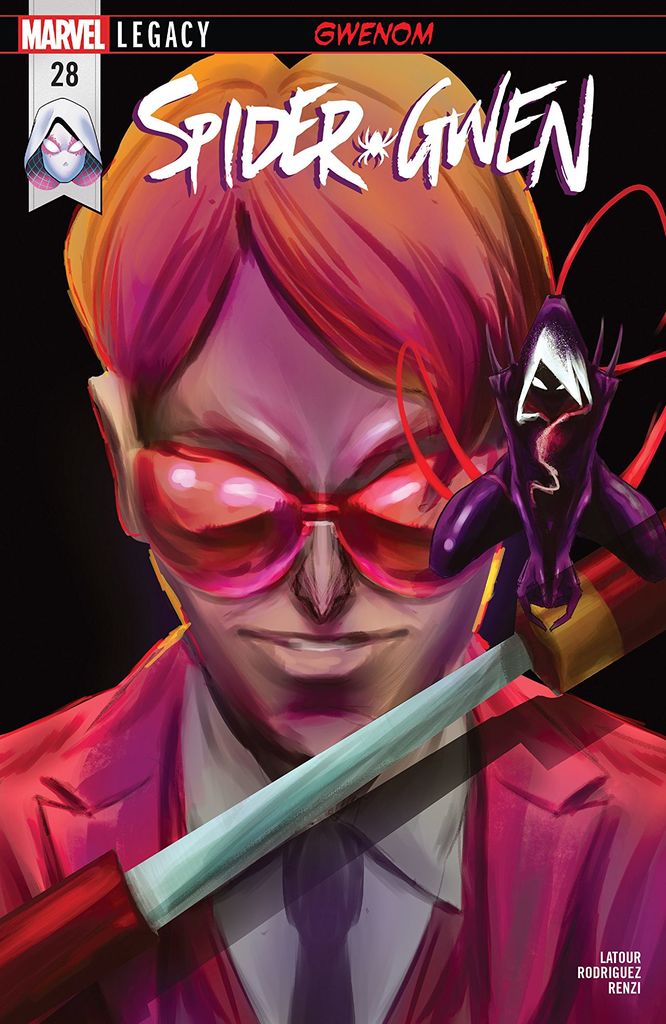 Gwen tells her story to the Mary Janes and the Parkers. Elsewhere, Matt gives his biography to the captive crooked cop. On Earth-65, he joined the Hand after his father died, and Stick was killed by ninjas.  Eventually, he became such a threat that the Hand sent to NYC to keep him busy. Matt reveals that he's obsessed with Gwen because he wants to prove that he was not the only one to be corrupted by power. Elsewhere, Ben shocks the others by telling Gwen to finish Matt once and for all. (!) Gwen reaches out to Frank who attacks Matt's HQ.

Overall: Interesting. We appear to be finally moving towards a climax.  I thought Ben was a touch out of character, urging Gwen to vengeance. 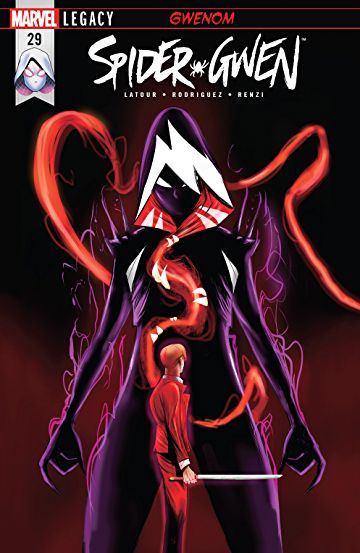 The Watcher of Earth-65 is berated by one of his colleagues for slacking off on the job.  Frank, Cap  and Gwen arrive at Matt's HQ simultaneously. Cap knocks out  Frank and kicks Matt's teeth in. Cap wants to take Matt in, but Gwen refuses, knocking her out, instead. Gen get her hand son Matt, but finds she can't kill him.  Her time-portal/wrist-watch (which Matt had stolen) sending Gwen whirling through spacetime, to land at the feet of...the original Gwen Stacy?

Overall: A good final (I hope!) battle, and a surprise ending that I did NOT see coming!