The CW's 'Stargirl': 24 Fun Facts to Know and Tell

June 18, 2020 — In case you love the new DC Universe/CW show Stargirl as much as I do, here are two dozen Fun Facts to Know and Tell about the star-spangled superhero show:

1. Geoff Johns (with artist Lee Moder) created Courtney Whitmore in 1999 as his very first comic book assignment, while working as an assistant for movie producer/director Richard Donner (Superman: The Movie). Johns has gone on to write a lot of well-received comics, serve as Chief Creative Officer of DC Comics and launch a career as a movie and TV producer. He’s also the showrunner on Stargirl, as God intended.

2. “I wanted to create a superhero for teenage girls,” Johns said in the foreword to the latest Stargirl collection, “someone who wasn’t a sidekick and who would actually grow over time. I used my sister as the inspiration for it all.” 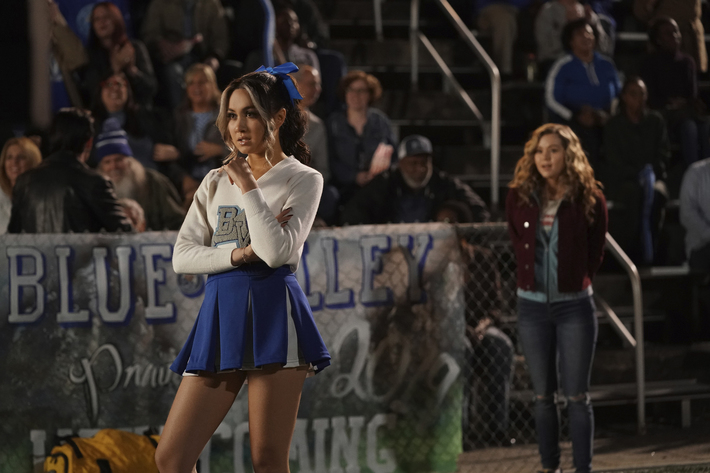 Look out for Nancy Burman (foreground, played by Meg DeLacy) in Stargirl, as her comics counterpart is a  second-generation supervillain with the charming name Shiv. (Quantrell Colbert/The CW)

5. When introduced in Stars and S.T.R.I.P.E. #1 in 1999, Courtney called herself the Star-Spangled Kid, second of that name. She used a “Cosmic Converter Belt” that had been adapted from a “Cosmic Rod.” When Courtney later received the “Cosmic Staff,” based on the same technology, from the sixth (!) Starman, she changed her name to Stargirl.

6. Which you don’t need to know. There’s a long, convoluted history in the comics regarding DC’s many Starmen, Cosmic Whatchamacallits and Star-Spangled Kids, which is absolutely irrelevant to enjoying the TV show. Forget I brought it up.

7. On TV, Sylvester “Starman” Pemberton (Joel McHale) is killed by Icicle (Neil Jackson), but in the comics Pemberton (going by Skyman at the time) was killed by Solomon Grundy, a super-strong revenant. On the TV show, Grundy kills Hourman instead. Take notes, there’s a quiz later.

9. In the comics, legacy JSA characters included Beth Chapel as Dr. Mid-Nite II, Rick Tyler as Hourman II and Yolanda Montez as Wildcat II. Two of those characters were killed, and all three appear to have been erased in a 2011 revamp. But Stargirl recycles those names/characters with Anjelika Washington as Beth, Cameron Gellman as Rick and Yvette Monreal as Yolanda. This is another thing you don’t need to know, but take it as a given that comics fans are thrilled.

10. In the comics, about half the 1940s Justice Society was comprised of what I call “Punchy Guys,” characters without super-powers (or with lame ones) whose crimefighting technique was to punch crime in the face until it fell down. Dr. Mid-Nite, Hourman and Wildcat on Stargirl fall into the Punchy Guy category, but have been beefed up for TV.

11. For example, in the comics Wildcat doesn’t have TV’s magic one-size-fits-all costume that gives Yolanda cat-like powers. The comic book Wildcat is Ted Grant, a professional boxer, who had no claws and was about as lithe, agile and cat-like as you’d expect a heavyweight boxer to be. Yolanda is seen boxing on TV, which is a nod to ol’ Ted. 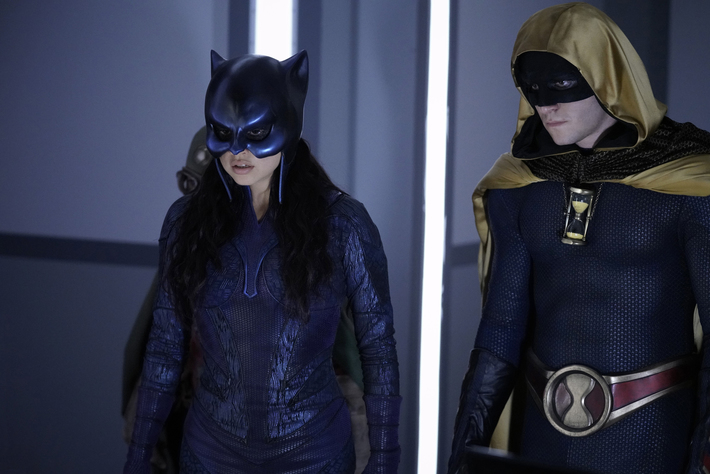 12. In the modern era, Wildcat, who debuted in 1942, is still a young-ish man, which is waved away with the explanation that he is under a magic spell from, conveniently, an adventure we’ve never seen. This spell also gives him nine lives, which regenerate over time like a video game — he can only die for good by being killed nine times in quick succession. So far Yolanda doesn’t have this power, but she does have a magic suit whose full use and origin is unknown. So hmmm again.

13. In the comics, Dr. Mid-Nite was Dr. Charles McNider, who was blinded by gangsters but discovered he could see perfectly in the absence of light. He wore goggles to see in daylight, and used smoke bombs to blind criminals while he punched them. On TV, McNider’s goggles give Beth the ability to see in a wide range of wavelengths, project video and super-Google information. That beats the heck out of punching people until they fall down.

14. In the comics, Rex Tyler invented the chemical “Miraclo,” which he took in pill form to become super-strong for an hour. (Then promptly announced his time limit to the underworld by calling himself Hourman.) That was passable in the ‘40s, but we know too much about addiction today to, ahem, swallow the idea of superheroes taking drugs. So on TV, Rick receives an hourglass which somehow does the trick. This passes my “Acceptable Changes to Canon” bar.

15. I would bet good money that the Mirakuru drug on Arrow, which made people super-strong, but eventually drove them mad, was inspired by Miraclo.

16. Pat Dugan (Luke Wilson) says all of the Justice Society is dead. But we never saw the bodies, did we? Well, except for Hourman, Starman and Wildcat. In fact, there are several JSA members we didn’t see at all. Once again: Hmmm. 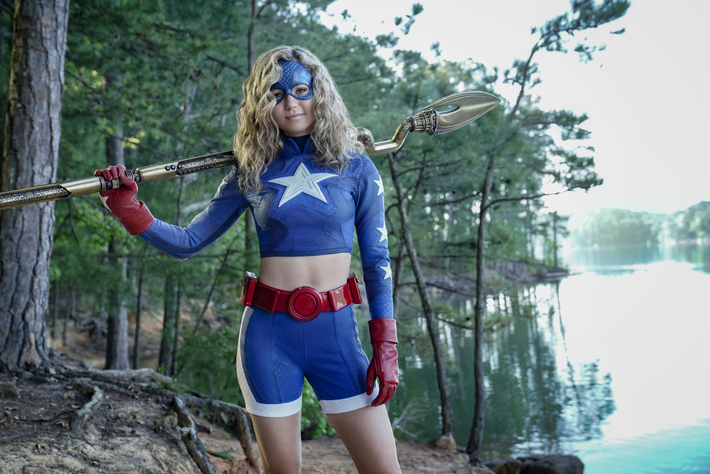 Yes, superhero outfits can and often do look like something a cheerleader would wear, as evidenced by Courtney Whitmore (Brec Bassinger) in Stargirl. (Jace Downs/The CW)

18. So who could show up? Well, the other Punchy Guys in the 1940s were the original Atom, Black Canary (a name in use elsewhere on The CW), Hawkman, Sandman and Mr. Terrific. They were all pretty boring (except for Hawkman, who had a cool costume and could fly), but could be enhanced for TV. If you see the civilian names Al Pratt, Dinah Drake, Carter Hall, Wesley Dodds or Terry Sloan, you’ll know something is up.

19. The members of the original JSA that weren’t Punchy Guys I call Powerhouses, because they had astounding super-powers that didn’t require fisticuffs. Starman was one of those. We’ve seen visual references to three more: the original Flash, the original Green Lantern and The Thunderbolt. Pat mentions another, Dr. Fate. Missing entirely are Wonder Woman (who is busy being a movie star) and The Spectre (seen on Arrow, and way too powerful and/or controversial to be a running character on a TV show). Significant names to watch for are Jay Garrick, Alan Scott, Johnny Thunder, Kent Nelson, Diana Prince and Jim Corrigan.

21. “Wait,” you say, “I haven’t seen all those characters!” Not in costume, true, but you’ve seen most of them. The Fiddler is Blue Valley High School Principal Anaya Bowin. Sportsmaster is gym owner “Crusher” Crock, and his wife Tigress is BVHS gym coach Paula Brooks. Their daughter is Artemis (Stella Smith), a hero on Young Justice but likely a second-generation villain here, like Henry Jr. and Cindy.

22. Other 1940s ISA members, most of whom I don’t expect to see, include Harlequin (too similar to Harley Quinn), Per Degaton (a time traveler, which is too big for a show already overpopulated with powerful characters), Thinker (used on The Flash) and Vandal Savage (used on Legends of Tomorrow).

23. We’ve only heard The Shade mentioned, when Dragon King said the Master of Shadows betrayed them. That’s interesting, because that’s exactly what The Shade did in 1990s Starman comics, too. If they adapt that story, we’re in for a treat. Also, the huge black hand that grabbed Dr. Mid-Nite in the first episode was probably The Shade’s doing. So where is he now? Hmmm.

There’s only one way to find out, and that’s to watch. Homework has never been more fun.

So... Eclipso. (Not sure what was going on with that opening flashback.)

I like Stargirl, but the so-called "Justice Society of America"...?

Reminds me of Comic Book Men as the Super Patrol.

We're about to get a new Green Lantern and a new Thunderbolt host, which will flesh out this new JSA a bit. My only concern is that if you get a Green Lantern, why do you need a Wildcat, or anybody else?

Yes, were saw the new GL last night ("Jade," more like, as she's the original's daughter).

Is the new Thunderbolt host advance news or did I miss something in episode 1?

Like their conflating of Star Spangled Kid and Starman, IMO they turned the star shaft(?) into a quasi- Thunderbolt.

Permalink Reply by Doctor Hmmm? on August 12, 2021 at 7:27am
Pat made a passing reference to his son's co-worker Jakeem. Blink and you'll miss it.

Yeah, I heard the name Jakeem somewhere in the first season. Also, we saw the pen vibrating like a jumping bean in a scene toward the end of the last season. So I fully expected a Thunderbolt even before I read somewhere that they're planning its appearance.

Obvs, I haven't watched the second season debut yet. I love Jade, a green girl who reveled in her appearance instead of boo-hooing about it, so I look forward to seeing her. I hope they don't bother with Obsidian, though, who's a really annoying whiner in the comics. Maybe they'll give him a personality upgrade if they use him.

It's a big week for us here at the Comics Cave. Not only is Stargirl returning, but so are Star Trek: Lower Decks, Archer, Titans and Riverdale. There's also the What If ...? premiere. If we get bored, we're way behind on Flash, Supergirl and Superman & Lois.

Now that you mention it, I do remember the hint at Thunderbolt.

Last night I watched the last two episodes of Loki (glad it's coming back), the Simpsons Loki tribute and the first episode of What If (which was very well done).

So "Jakeem" was a red herring... no, wait... he wasn't! (Mike's well on his way to becoming a super-villain, however.) I like all the young actors, but the "JSA" still looks more like like kids dressing up for Hallowe'en than super-heroes. Even professional cosplayers look more authentic! Still, if this team lasts as long as the original JSA did (yeah, right), at least they're starting young. The Shade was great.

I only saw part of the Simpsons/Loki crossover, but I guess we have another character who can lift Mjolnir.

Now that you mention it, I do remember the hint at Thunderbolt.

Last night I watched the last two episodes of Loki (glad it's coming back), the Simpsons Loki tribute and the first episode of What If (which was very well done).

The Shade was great.

The actor is well cast and I like that The Shade is being portrayed as not completely evil, similar to how he was in the James Robinson Starman run.

I loved the beginning with the newspaper headlines, the photo of the full JSA and especially the photo of the Seven Soldiers of Victory. I momentarily wondered about showing Green Arrow and Speedy, then I remembered this is not the same Earth as on Arrow and Flash.

I suspect that DC left Aquaman out of the Soldiers group because....the same reason the Teen Titans had trouble including Aqualad.

I forgot to mention that Johnny Thunder and the Thunderbolt were on the nose perfect.

Yes, Jim Gaffigan as the Thunderbolt was inspired casting.