Good news (for me): I didn’t miss Flash this week after all. I asked Tracy on Wednesday if we recorded one this week and she said no. (I suspect she simply didn’t want to watch TV that night, but she assures me that is not the case.) We watched it last night and I caught up on this week’s conversation just now. I have nothing to add to the “Iris Conflict,” but I suspect the status quo will not remain beyond the end of this season.

It was good to see Emily Kinney getting work so soon after The Walking Dead, but I was also pleased to see the third alumnus from ‘90s Flash series. First, of course, was John Wesley Shipp, lending the show a sort of cross-dimensional generational vibe; then there was Mark Hamill “reprising” his role (after a fashion) as the Trickster; finally this week and next will feature Amanda Pays as Tina McGee.

Tina McGee was actually in an earlier episode, too. I'm thrilled she'll be a semi-regular.

I don't what would be cooler: if Tina McGee has a scene with Barry's father or if she flirts with Barry?

I'm unable to find a good screenshot online, but ... has anyone else noticed that the color scheme of the area outside the holding cells below STAR Labs is classic Plastic Man?  It made me laugh when I realized what I was looking at. 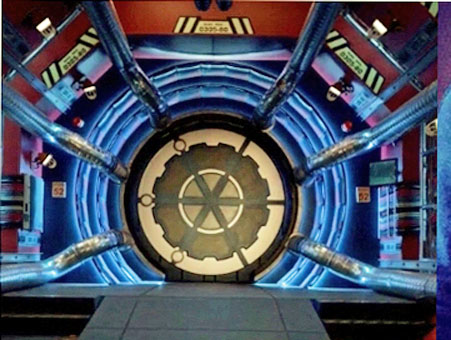 LOL! I see what you're saying, now that you say it and I see a picture. I hadn't made that connection, or maybe I didn't look fast enough or was distracted.

It wouldn't have to have been deliberated, but it could've been. Nice eye.

I used to think the same thing about the Talon, the coffee shop in Smallville: 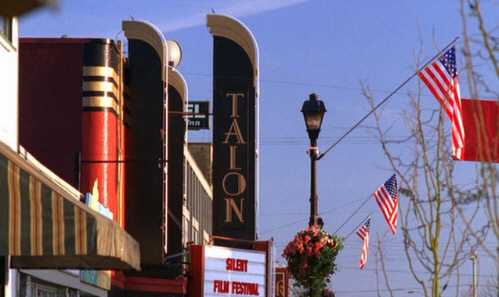 Ummm … If it’s important to your evil scheme that no one knows you can walk, why live in a house that’s virtually all window and no wall?

Also – and this just occurred to me, so yeah, I’m a little slow – in “Rogue Time” Thawne/Wells  (Thwells?) was adamant that Barry not alter the timeline in even a teeny, tiny way, lest all hell break loose.   But … isn’t Thwells’ whole plan based on altering the timeline by causing S.T.A.R. Labs to be built and go kablooey years before that was supposed to happen?  Pretty much everything interesting that’s happened in Central City since Week 1, all the goofy antics of those pesky meta-humans, that’s all on Thwells.

And why wouldn't you put alarms in your secret room to let you know when people find it?

Or lock it in the first place?

He keeps going to his secret room and talking to his future computer to make sure that what he's done has things going the way he wants. The last thing he needs is Barry acting as a free agent and meddling with his carefully crafted timeline.

A couple of times current events have changed the future in a way he doesn't like, and he goes and tinkers until he gets the result he wants.

I'm going with Yes and Yes.  Maybe it's just that I keep looking at Tom Cavanagh and wishing Ed was still on the air, but a lot of his interactions with The S.T.A.R. Labs Kids(TM) seem genuinely heartfelt and sincere. I think it would be hard to pass yourself off as one of the smartest men in the world, for 15 years, if you couldn't access his memories and brainpower.  Maybe some of Wells' personality comes along for the ride.  Maybe, when he isn't actively scheming, his default mode is closer to the real Wells than the real Thawne.

This is also my fanboy way of rationalizing how Cavanagh could stay a series regular.  He's the CW's Green Goblin ... or, even better, he's King Tut!

Thawne was a scientist in the far future in original Flash comics. That guy wouldn't have any trouble pretending to be a really smart man a few centuries in the past. Heck, we could all be wizards in the Dark Ages just from our common medical knowledge. "No leeches. Keep the wound clean. Drink plenty of fluids and call me in the morning."

Of course, we don't know much about the TV Thawne. He might have been a boob in whatever century he's from.

The upshot for me, though, is that Thawne's scientific knowledge isn't that relevant. What is important is the process by which he got Welles' face, about which we know little. Mayhap some of Welles' personality came along for the ride, that Thawne has to actively suppress.