Thawne was a scientist in the far future in original Flash comics.

I can't remember ever reading the earliest Reverse-Flash stories, so I guess I never knew that.  Hmmm ...

They are both names apt to get him bullied in elementary school.

I wonder if it doesn't have something to do with this week's threat, Everyman (a brand-new villain, right?). Wells said something like "In this time, rewritable molecules were the stuff of science fiction" -- which seems to indicate it's being done in the future. Me, I thought we were getting a stealth introduction of the Mirror Master. 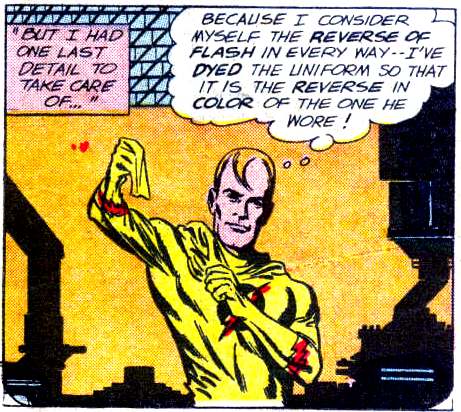 IIRC, Eobard Thawne used 25th century technology to duplicate Flash's powers but he didn't create anything himself. He was portrayed as the classic "obsessive fan" who wanted to become the object of his fixation.

Ah, right! Thanks for the reminder.

Hey! It's the future! That could be the height of style!

Or he could be a dweeb there, too! 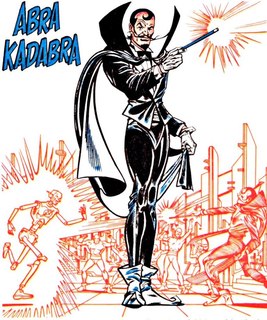 Weirdly, Abra Kadabra had a similar forehead swoosh in his early appearances, even though he came from the 64th century and Thawne came from the 25th. I guess what they say is true: If you wait long enough, everything comes back in style!

Hmm.. Eobard Thawne or Harry Osborne? Who wore it worse?

Is it me or are the walls in Eobard's secret room covered in what looks like braille?

Also, interesting that "Wells" went to see Eddie at the end. We know he made sure not to kill him when he was killing cops one after the other. Because Eddie's in his family tree? 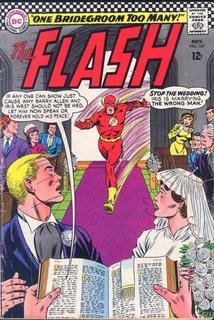 You guys clearly are forgetting (I'm being charitable) that, when it came time for Barry to marry Iris in FLASH #165, Eobard came back in time, tinkered with Barry's electric shaver and used it to convert his face to resemble Barry's so he could kidnap Barry, fling him into the future, tap into his memories and take his place.

He reversed the polarity (or something) in the razor, held up a picture of Barry and the razor rearranged the molecules in his face to replicate Barry's puss. That's science that would impress Abra Kadabra!

I think that's on par with us going back to the Middle Ages and building a Corvette.

After last week's slowdown, this week really kicked things into high gear with all the revelations. I was surprised that the secret room opened so easily--I figured since it was hand-operated, it was biometrics and Barry's hand wouldn't work, so he'd have to vibrate through the wall. Maybe it's Speed Force-activated.

The notion that everything lit up, including the one future newspaper, was a little dramatic too, but I can't argue when the scenes make me say, "Holy crap!" Maybe Wells expected/wanted them to find it?

I'm with Doctor Hmmm in still wishing Ed was on the air (which would wreak havoc on Modern Family and Sterling Cooper & Partners). Be that as it may, I'm just gobsmacked that all the opening secrets are being resolved by season's end. I hope Eobard/Ed/Wells gets away, but I don't know how that's going to happen (especially since they let Captain Cold get away, in a deal I still don't understand exactly).

Maybe Eobard will return to the future like he wants and find ways to come back on occasion, as happened in the SA Flash. Him heading back to the future wouldn't really help Barry's dad get out of prison, so that part would go on the back-burner for next season. But then what would be the Big Bad next season? It must be...Grodd.

I also expect Iris is going to learn the secret really soon, for all our sakes.

Not only would it be a shame to lose Eobard, but the Flash really needs a Dr. Wells to help him out and keep exploring his powers. Losing that relationship will be hard.

I thought Eobard showed up at the precinct to warn Joe off. I figured he was going to say, "We've both lost someone close to us, and I know what it's like to lose someone else by digging into things that are beyond our understanding." But he didn't really do that, so I'm not sure what he did there. Maybe he did want to make sure Eddie stayed safe, although he'd know that already--and he didn't exactly do anything to keep him from being locked up for murder, which would really dampen his generational-building capabilities.

I was also amazed that some key Arrow bits of business got done--trying to heal the rift between Lances and creating a much better Canary Cry (which Laurel really needs). I also noticed she called herself the Black Canary.

And I love that Cisco is such a meta-fanboy. That picture with BC and his giddy smile was hilarious!