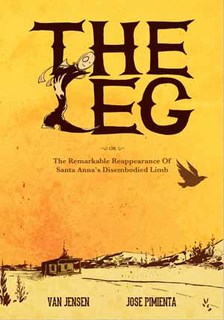 THE LEG or The Remarkable Reappearance of Santa Anna's Disembodied Limb

The Kickstarter campaign for this project had a great tag line: "The Leg: The Graphic Novel With a Kick." Back in 1838 Mexican President Santa Anna lost his left leg in battle, giving it a full military funeral. When Santa Anna was thrown out of office the leg was exhumed, dragged through the streets, and lost. This story is set in 1938, when the Leg has reappeared (clad in a tall leather boot by its cobbler owner). It's sentient now--no explanation of that surreal state of affairs--and soon embarks on an adventure. The Leg initially sets out to avenge its owner, but then finds itself involved in preventing an assassination attempt on the current President.

What does a sentient leg do, exactly? The story is not so magical that we get a talking leg, and visually it would have been more accurate to entitle it the Boot (but not as catchy!). An omniscient narrator does a lot of the talking, and at first the Leg mainly expresses itself through kicking, although it has some tassels that look like arms, and a pull strap that looks like a head. After it joins up with a young girl running away to the big city, she draws a face on the strap, which gives Pimienta an excuse to give the Leg changing facial expressions. It's a bit of an artistic cheat, but it allows the Leg to become more of a full character.

Jensen blends Spaghetti Westerns, Mexican history, and folk tales. Pimienta (who responded to the Mexican folklore in the script) provides visuals that are both Mexican and folkloric. The story includes animal spirits, witches, and modern Mexican city life. All of this is rendered in an appealing sketchy style, with lots of expressive color highlighting. Visually it would be right at home at Top Shelf or Fantagraphics.

Jenson's first published comics work was Pinnochio, Vampire Slayer (originally for Slave Labor Graphics); most recently he has been writing Green Lantern and the Flash for DC. This is actually his first comics script, as well as his first self-published work. Pimienta is a native Mexican, co-creator of A Friendly Game, and an artist on several successful Kickstarter-funded comics anthologies. If this sounds like your kind of craziness you should definitely have a look. There are lots of sample pages on the Web (including the Kickstarter page). Comics Alliance had an especially good joint interview of both creators.

Back in the 1880s Mexican President Santa Anna lost his left leg in battle, giving it a full military funeral.

The "1880s" reference sounded wrong, since Santa Anna's wooden leg was captured in the 1840's Mexican War by U.S. troops. According to this Wikipedia article he lost his real leg in 1838 during an attempted invasion by France. He died in 1876.

I was relying on the Kickstarter page for this date. Since it also references the Pastry War (1938-39), the 1880s date was probably a typo. I've revised my review, thanks.