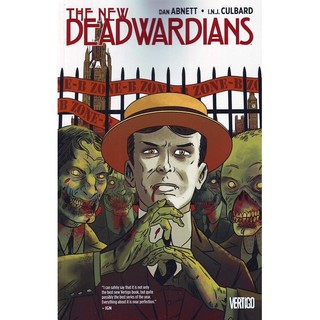 This Vertigo miniseries starts from an unlikely premise: it is set in a post-Victorian England where the upper classes have voluntarily taken the Cure and become vampires ("the Young") to escape the lower classes, many of whom have been turned into ravenous zombies ("the Restless") by the Restless Curse. All of this leaves the remaining normal humans ("the Bright") in the middle, feeling like pawns in a class war. So the series has vampires and zombies, and a punny title. How good could it be?

Really good, so far. Writer Dan Abnett and artist I.N.J. Culbard drop the reader right into this world, as we witness a zombie attack in progress. Chief Inspector George Suttle of Scotland Yard dispatches the Restless who has killed his housekeeper. His maid was also bitten, so he takes her to the hospital for the Cure, giving us a good overview of the undead situation. When Suttle arrives at work he is dispatched to the scene of a murder, a crime that has all but disappeared. Not only is it an actual murder, but the victim is a vampire. He was not killed in any of the usual ways, so Suttle has a true mystery: how do you kill something that was already dead?

I liked The New Deadwardians a lot, enough to get the TPB too. And hoping for a sequel.

I liked it too! HERE'S THE COLUMN I wrote about it a while back.

I thought I remembered you liking it, Cap. Also Rob Staeger, and probably some others. I'm getting to it late, even taking trade waiting into account.

Well, get to reading and tell us what you think!

Suttle's investigations take him into Zone-B, the Bright quarters (with a Bright driver, as well). The murdered vampire Lord Hinchcliffe was known to have certain "tendencies," which he satisfied by visiting a brothel. Suttle gets a bit more than he bargained for, finding some old desires stirring. He's so stirred up that he nearly starts a fight a few minutes later when a gang of Brights threatens him. His next stop is the Hinchcliffe estate, officially to explain to the Lady Hinchcliffe how the investigation is going, and why she cannot have her husband's body for burial. But Suttle also hopes to learn more about the dead vampire's history.

To get to the estate he must cross Zone-D, an area where  zombies roam free (aka the Restless Belt and the Dead Zone). Getting into the zone requires the use of a flame thrower to clear the way, which I couldn't help but picture on the screen. On the way he remembers the Memorial War as he answers questions from his driver, Constable Bowes. Our picture of this world gets more complete as the story progresses, in a very natural way.

As Suttle speaks with the family he begins to suspect that they may have something to hide, and he may be getting misdirection in answer to his questions. All of which is couched in class terms, as well. The Young may be in the top rung of this very class-conscious society, but nobility still trumps everything. Another interesting wrinkle is the angle that the women't suffrage movement takes: what they want is equal access to the Cure ("Throats For Women" is a rallying cry). He also is beginning to get a notion about the meaning of the strange symbol that was found burned into the murder victim.

That symbol represents a secret society called The Sons of Adam. Suttle gets his first serious evidence of magic when he chases down an artist/poet named Salt who was known to consort with Lord Hinchcliffe. Salt proves to be very elusive: when finally chased down, he manages to enchant Suttle into believing that he was responsible for the murder! Salt admits that he killed Heathcliffe via magical means. The Sons had forced him to cast a spell that went horribly wrong, and he means to take revenge upon them all. Suttle bests him, and he falls to his death, ending the revenge plot.

But the curse remains. Suttle agrees to close the case without revealing his findings, in the name of national security. Despite all the details I've already given away, I prefer not to completely spoil the ending for those who haven't read the series. I was a bit disappointed to find magic behind both the central murder mystery and the undead state of society. I had not expected the solution of one mystery to also be the solution to the other, so that was a pleasant surprise.There is certainly plenty of room for sequels--I can even imagine a prequel telling the full story of the war and the beginning of the undead plague--but this story is very complete, with even more closure than I expected.

The one thing I didn't settle about New Deadwardians to my satisfaction is why The Young haven't cleared out all the zombies. I mean, the Dead don't even notice the Young, right? Can't smell 'em, don't care about 'em. So send out squads of vampires every day with machetes and chain saws and just mow down the Dead. Do this for a couple of months, and no more zombies, and all that land is opened back up for cultivation and housing.

I never figured out a reason why they didn't do that.

That's a good point. I guess we're just supposed to see it as such a huge task that no one even thinks about trying. There's also the strict class lines. The Young are almost entirely upper class, so they don't think much about the Restless or the danger they pose for the remaining Bright population.

That's a good point. I guess we're just supposed to see it as such a huge task that no one even thinks about trying. There's also the strict class lines. The Young are almost entirely upper class, so they don't think much about the Restless or the danger they pose for the remaining Bright population.

All true. But they need the Bright, and they know they need the Bright. So I'd think it would just be common sense to allow the Bright to spread out and prosper, so as to create more wealth for the upper class. And to do that, they'd need to winnow down the Dead, for the room if nothing else. After all, those fences are keeping the Young locked up, too.

Yeah, I guess I saw it as mostly a class thing -- the Young both don't care that much and are too pampered to actually work to do it. If they wanted it done, they'd get Brights to do it, even though they themselves could do it much more safely and efficiently. They value their leisure a lot more than the value Bright lives.

Yeah, I guess I saw it as mostly a class thing -- the Young both don't care that much and are too pampered to actually work to do it. If they wanted it done, they'd get Brights to do it, even though they themselves could do it much more safely and efficiently. They value their leisure a lot more than the value Bright lives.

That's sort of what I found myself left with after I thought it all the way through. There are probably some dedicated public servants and/or ex-military like Suttle who would be more than willing to do it, I'd think. But probably most of the Young are too entitled, snotty and lazy to put in a decent day's work even in the best of times, and after The Cure, you add in apathy and torpor. That's the best I could come with. (But I could see Suttle spending his nights clearing out The Dead as a hobby!)