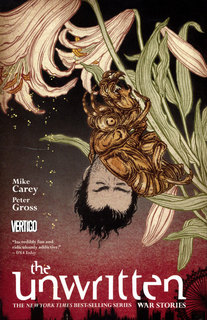 Tom Taylor has been trying to find his way back to our world for some time in this series. He’s been wandering through stories--with a significant trip through the Fables universe in the previous volume, and a visit to the Underworld of the Orpheus myth in the one before that. In the course of the first issue in this collection we see him travel from “the beginning of all things” through the beginning of life, then the creation of language and story...finally winding up back in London, reunited with longtime adventuring companions Lizzy and Richie. He’s returned to a world where reality has become tilted, and all sorts of bizarre story elements have become real. This is a place in which a medieval army can come under attack by long-legged Martian fighting machines from The War of the Worlds.

The cause of the crisis--and Tom’s dad Wilson actually uses that word--is the injury of Leviathan, the source of the power of story. Wilson and Tom are both trying to help with the healing, which puts them in direct conflict with the villainous Pullman, who has been trying to kill Leviathan. Wilson has a plan which Tom doesn't trust, so he goes off seeking his own solution, which puts him back into contact with Madame Rausch, a player we haven’t seen for awhile.

Meanwhile, Pauly the foul-mouthed bunny (who has finally found his way back into human form) has found his way to Wilson’s house. He has been listening to an owl’s advice--an owl who is revealed to be Pullman at the end of the arc, as the two head underground. Amazing how significant this seemingly minor character became.

As the penultimate volume in the series, in some ways this is all set up: a way of putting all of the major characters back in play while setting the scene for the final conflict. But there’s still plenty of literary references to keep things interesting. I especially loved the appearance of the Martians, but there’s also a nice Alice in Wonderland sequence earlier in the collection, and a restoration play that Lizzie must escape from.