The Unwritten Vol. 8: Orpheus In The Underworld 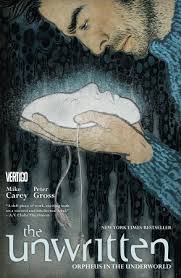 This collection picks up with the group still in Australia, in the middle of a fight with a bunch of monsters. Detective Didge touches a magical object and gets thrown into Hades (the version from stories, not the actual kingdom of the dead). Before she gets yanked back into the real world she meets the missing Lizzie Hexam. Tommy has been trying to help her, so now he resolves to go to her. To do that he needs a real world with story connections to act as a portal, so the group heads for Hanging Rock. When the setting doesn't seem to be working by itself, Danny Armitage wonders if a whale story might help with connecting to Leviathan. So the story finally gets to connect with indigenous Australian folklore, in the form of the tale of Kondili.

Once again a story has power, and Tommy immediately finds himself thrown back into Storyland. His landing spot is a desolate area populated by survivors of the Wave that had torn through earlier in the series, seemingly destroying everything in its path. Baron Münchhausen saves Tommy from some vicious cartoon animals, and agrees to escort him to the Land of the Dead. As the pair runs from a murderous army of animals (real ones this time), Tommy is struck down and falls into Lake Avernus, the gateway to the Land of the Dead.

I just lost most of a post, so this may be even briefer than usual. Hades looks like all of the stories. Tommy has drunk the waters of forgetfulness on the way down, so he doesn't even remember who he is at first. And there are harpies, a ferryman, and a three-headed dog. When Tommy and his companions cross a river of fire to a castle, King Hades is the pissed-off guy who was transformed into a rabbit earlier in the series (I forget his name).

Meanwhile back in the real world, Richie Savoy and Detective Didge investigate murders that seem to have been created by a child's horror stories. Bookstores are closing everywhere you look, because everyone has lost faith in the power of stories. But stories appear to still be very powerful indeed.

The title arc "Orpheus in the Underworld" closes the collection. It takes place entirely in Hades, and there is more than enough action to justify that singular focus. One surprise follows another: Lizzie Hexam unmasks, revealing herself as an undercover member of the court of the king of Hades; Wilson Taylor (remember him?) shows up in a cell; and the group travels to an alternate Hell, where our old friend Pullman is king. Tom hatches an escape plan. With the cooperation of King Pauly (there's a useful recap of his story, which I appreciated, because it's been awhile) they re-enact the Orpheus myth. This allows Lizzie, Wilson, Pauly, and the two children Tom had befriended to escape back into the real world. At least that's the hope; all Pauly wanted was to be a man again. Tom plays the Orpheus role, meaning he must be cast back into Hades.

The plan was for him to go "as deep as it's possible to go," which should take him to the truth behind everything the Cabal has been trying to do: maybe even further. He drops into a forest, surrounded by a group of characters from Bill Willingham's Fables.

I had completely forgotten about the crossover. Fortunately it all takes place in the next Unwritten collection. I read Fables, but it will be nice to have everything in one place. Now that I've seen the setup, I'm a little dubious about how the Fables universe can be the Truth about everything. But I've got a lot of faith in all of the creators involved, so I'll be approaching it with an open mind.