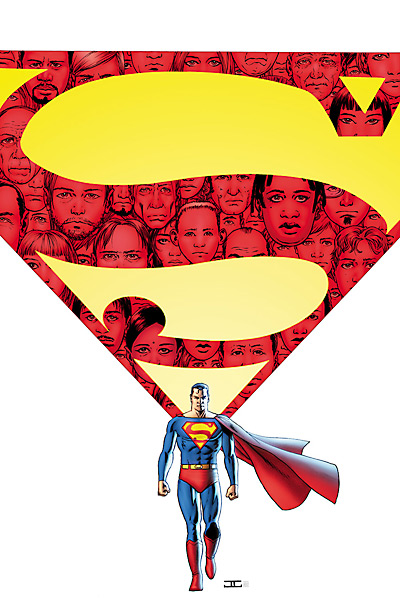 Well, if you ask the aliens he gave asylum to and the little boy he protected from his abusive father, not to mention the people of Metropolis, the JLA, the Legion, etc, you know what the answer is. 'Course if it was "No", we could have Luthor starring in a book or something!

Well, the real interesting thing about the question "must there be a Superman?" is the next question: "why?"

(Well, the other interesting thing is that if you answer the question in the affirmative, what does that say about us poor schmucks on Earth-Prime?)

Comixology previews Superman #706: "The epic 'Grounded' story arc brings The Man of Steel to Des Moines, Iowa! A chance encounter there, however, suddenly thrusts Superman back in time. So somehow he's Superboy again, the world is on the brink of nuclear Armageddon and it's all his fault!"

The four preview pages provided, however, show something else entirely: Preview: Superman #706

Granted, we don't have the entire issue to go on, but what is shown here is significant enough to comment on now. To wit: Some website, Urbanitis, has posted an article titled " 'Faily' Planet: City's Top Paper in Bed With Superman?" Perry White is in a meeting with Ron Troupe, who says "the article accuses us of bribing Superman into giving us exclusives and hints at an unprofessional relationship between Superman and Lois." Ron asks if there's a slush fund; Perry denies that the Planet has ever paid for an interview, ever. Perry is indignant that the Planet's -- and Lois's -- integrity has been challenged, but Ron tells him to find a way to deal with it.

I've been away, so I have to ask: What's Ron Troupe's role here? Is he the Planet's lawyer now?

Anyway, this is an intriguing hook to hang a comics story on, one that could and probably should have been written long ago.

However, it's not just the ideas that make for a story, but the execution, and things go very, very far off the rails here. Perry's response -- to send an intern to Urbanitis to infiltrate the place on the d.l. -- is stupid, wrongheaded, underhanded and, quite frankly, beneath him, not to mention likely to blow up in his face.

Well, Kelvin, I liked the story, but I really wish you'd read the whole thing because ’m eager to read what real life journalists such as yourself (and Cap) think of it.

This issue was pretty good for a fill-in (great cover, too!), but it got off to a shaky start. Perry White is the central character of this issue, as he’s forced to confront the internet as the wave of future journalism. Perry White’s an old-school journalist, and I’m not offended by his use of… shall we say “salty language”… in the workplace, and I’ve come to accept a few @#$!s here and there in a code-approved comic book. But #708 use euphemisms in place of his salty language. For example: “Galloping horse hockey,” “I don’t give a cracker,” “Union my rear!” “Who do I have to spoon to get some good news around here?” and the ever-popular “son-of-a-biscuit.” That kind of language kept drawing me right out of the story.

I’m from the St. Louis area originally, and I make it a point to critique the St. Louis skyline (particularly the Gateway Arch) every time it appears in a comic book story, mainly because it is so seldom every draw correctly. Lois is there this issue, and I really must give artist Amilicar Pinna an “A” for effort (and a “B” overall) for his depiction, not only of the Arch, but also throwing in the AT&T building.

I use son-of-a-biscuit all of the time...seriously.  Of course, I'm around kids at home and work...

I posted that before I got to my friendly neighborhood comics shop, but I did buy the issue and read it. My main thought is that a very, very good premise was wasted on a one-off tale, when it could -- and should -- have been fodder for many, many stories. It's too bad this comes too late for Captain Comics to examine in his thesis paper.

If we begin (as I do) with the premise that the Daily Planet is a major metropolitan newspaper, akin to a New York Times or a Chicago Tribune or a Washington Post, then most such publications have to contend with smaller challengers that turn the lens on them. In the past, it would be an alternative press newspaper -- the Times has the Village Voice (among others), the Tribune has the Chicago Reader, the Post has the Washington City Paper -- and today, it's the blogger. A sage, seen-it-all-and-done-it-all newsman like Perry White really ought to have reacted with a yawn; oh, here's another one. On the other hand, concern that something like this Urbanitis is catching on as the Planet's advertising revenues slip rings true. Concern that the Planet ought to figure out how to connect with those young readers really hits home.

However, my objection to Perry White sending in a mole still stands. It's still stupid, wrongheaded, underhanded and, quite frankly, beneath him. And if Perry was dealing with somebody else, it still might have blown up in his face because I fully would have expected Urbanitis to write about the fact that the Daily Planet sent in a mole! A sage, seen-it-all-and-done-it-all newsman like Perry White certainly ought to be smart enough to see that that's the very kind of thing that makes a little matter that might blow over into a scandal that consumes everything in its path. An Urbanitis story that the Planet sent in a mole would have given more weight to its weak allegations that the Planet had an untoward association with Superman, because it makes the paper look devious -- because, well, doing that IS devious.

And the fact that Urbanitis was wrong about this particular story and its proof was bogus would NOT necessarily mean it would back off; they might just figure THIS story didn't pan out, but keep looking for the NEXT one. In a comic book story, yes, the purveyor of Urbanitis would be contrite and apologetic. Here on Earth Prime -- well, I'll just say two words: Matt Drudge.

Although, the more I think about it, I come to think that that stupid action could have been the springboard for even more stories ...

Again, this was a waste of a good premise.

Thanks, CK. I'm inclined to agree, but I did like the resolution, however, in which Perry set Jack Hoffman up with a summer internship.

I didn't. I think it would have made for a better story for Jack Hoffman to see the offer as patronizing, or see it as an attempt to co-opt him -- which, again, would have been a springboard for future stories.

Another part of this missed opportunity: Wouldn't it make good story fodder for Superman, in the wake of this scare, to dial back on all the "exclusives" he gives to Clark Kent and Lois Lane and start talking to the Jack Hoffmans -- and dislike the results?

They kind of ham-fistedly did this with Cat Grant and her screeds against Supergirl during the World of Krypton stories a year or two ago, and didn't quite get that right, either -- but this could have been a nice, ongoing element in the Superman titles, balancing out all that cheerleading the Planet does for Superman.

Man, they didn't know what they had, here!

As I remember it, during the Bronze Age, and probably the Silver Age, any other newspaper that was critical or hostile toward Superman usually had a nefarious reason behind it.

So wouldn't it be great -- and be an affirmative step toward reinventing Superman for the 21st century -- to present another publication that is critical or hostile toward Superman that doesn't have a nefarious reason behind it? One that just has an honest disagreement, another perspective? I'd go for that.

Or even a less-than-honest disagreement. I've dealt with people from outfits like this, full of self-righteousness but more than willing to cut corners while bleating about how the establishment media's day has passed, which is where I though they were going with this. I wish they had taken it further. DC really dropped the ball, here.

Permalink Reply by Jeff of Earth-J on December 17, 2010 at 8:30am
I think it would have made for a better story for Jack Hoffman to see the offer as patronizing, or see it as an attempt to co-opt him...

Oh, I definitely think it was an attempt to co-opt him!