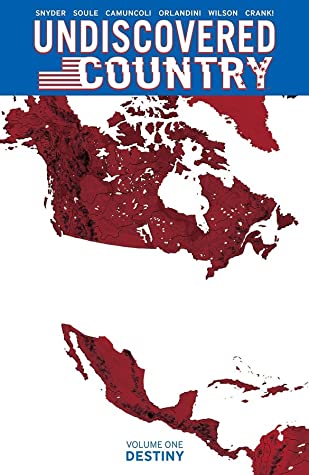 Undiscovered Country presents dystopia on a grand scale. Anticipating a global collapse, the United States of America walled itself off from the rest of the world. Over a century later, a mysterious summons from inside America calls a small expeditionary force to enter the country.  A cure for the current global pandemic--which threatens the very existence of the human race--is promised. The entire air space is a no-fly zone, but the helicopter passes safely through the electro-magnetic wall--only to be shot out of the sky by a missile.

It's a bad start to the adventure, but things start to get worse almost immediately. And considerably stranger. There are a bunch of Mad Max-style vehicles and animals, and then most of the group is taken into an underground zone with the Silent Minority--silent, because they have to stay out of the Destiny Man's notice; and minority, because there aren't many left.  Sam Elgin (who is visually the image of the classic Uncle Sam) says he wants the group to save America.

As the group (which has been split up) continues coping with the new situation, there are a series of flashbacks showing how all of the team members were recruited.  The process reveals as many questions as answers: the various power centers in the new world all recruit different team members. Sandoval (the journalist on the team) did the research, and she could not see why any of the team members were chosen: in fact they seem like the worst possible choices.

Be that as it may, they have the Key, and pass the first door into the Spiral (the series of destinations that now define the American nation). The A.I. named Aurora (which may be the one who invited them) also lets Destiny Man in. So the scene is set for an epic journey, one which seems likely to get stranger and more dangerous as it goes. The story is a bizarre blend of apocalyptic imagery and conspiracy theories, with lots of wild action. The team is headed by two of contemporary comics' best writers, but the artistic team really sells all of the wild ideas in the script. Looking forward to the next installment.