'Villains Month' fills in some blanks in The New 52

Here’s the poop: In the last couple of months, the Crime Syndicate -- an evil analog of the Justice League from a parallel Earth -- has invaded the 52 monthly superhero books that comprise the DC Universe. This month the Syndicate announced on every TV and computer screen on the planet that the Justice League is dead, and “THIS WORLD IS OURS.”

Spooky! But, OK, none of us believe the Justice League is really dead. DC isn’t going to throw away trademarks like Superman, Batman and Wonder Woman, so we readers know they’ll be back. But as far as the inhabitants of the DC Universe know, it’s true – and that is the basis for “Villains Month,” an event running through September.

All of DC’s superhero books this month star the villains who normally bedevil the hero of the title. For example, Batman comes out four times this month, but the Dark Knight is missing and presumed dead, so The Joker, Riddler, Penguin and Bane take over one issue each. Superman also ships four times this month, starring Bizarro, Brainiac, Parasite and a new bad guy named H’el.

And so forth. Black Manta, Cheetah, Darkseid, Deathstroke, Harley Quinn, Killer Frost, Lex Luthor, Mr. Freeze, Poison Ivy, Ra’s al Ghul, Reverse-Flash, Two-Face and Zod are among the better-known villains headlining an issue. But a number of obscure or new villains are getting a shot, too. In addition, a miniseries named Forever Evil shows the overarching effects of the villains’ takeover.

And to top it off, DC has published a certain percentage of each title with “lenticular” covers. These are five-layer holograms that give the impression of movement when held at different angles. DC is only charging an extra dollar for the books with the special covers, which is unlikely to cover costs. According to cnet.com, DC had to buy a whole month’s worth of plastic from a factory in China! 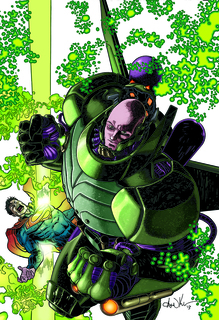 I should mention that older fans will recognize the Crime Syndicate. Ultraman, Superwoman, Owlman, Power Ring and Johnny Quick – evil versions of Superman, Wonder Woman, Batman, Green Lantern and Flash -- were introduced way back in (gulp) 1964. They haven’t been used very much in ensuing years, but superstar writer Grant Morrison and artist Frank Quitely revisited the concept to good effect in a 2000 graphic novel named JLA: Earth 2.

What’s the result? Well, maybe you’d expect this about a month ruled by the bad guys, but there have been some glitches.

“Unfortunately, DC didn’t print enough of the lenticular covers to meet demand,” posted Beguiling Books & Art on its website (beguilingbooksandart.com), mirroring complaints across the retail spectrum. “They really, really screwed this up. As a result, we are only getting between 30 percent and 90 percent of our orders on these books.”

And, of course, not all of these villains are interesting enough to carry a book, or to give us anything new. The “Batman” issue starring Penguin, for example, trod such familiar ground that it felt like a reprint.

But I think, overall, “Villains Month” has been a successful effort.

For one thing, we don’t really know the backstory of even well-known villains any more – not since DC re-launched all its titles two years ago. For example, Bizarro (well, technically Superman #23.1) re-introduces the character, who hadn’t yet existed in the post-2011 reality. And while not all of these books work on a creative level, some are surprisingly good. I’ve never been a big fan of Scarecrow, for example, but his issue (Batman #23.3) was a delight. The plot was simple; just the character wandering a lawless Gotham City recruiting each of Batman’s major foes for the Secret Society being formed by the Crime Syndicate. What made it fascinating was Scarecrow – psychiatrist Jonathan Crane in real life – manipulating all the characters he meets with a variety of psychological tricks, from flattery to empathy. Now that’s a super-power!

“The great thing about villains is that they cross the line all the time,” said Chief Creative Officer Geoff Johns in a press release. “They don't know where the line even is. They're unpredictable. You're not sure which way they'll turn, which makes writing them always compelling and motivating.”

And that is certainly true. For one thing, you’d be surprised how many of DC’s villains have decided – for entirely practical, plausible reasons – that they need to take up arms against the Crime Syndicate. It’s not all that surprising, I guess, if you take into account that super-villains aren’t generally joiners.

And finally, this event gives DC the excuse to re-release JLA: Earth 2 in a deluxe edition ($24.99). The “deluxe” material consists of character/page sketches and script pages. I don’t find that particularly deluxe, but who cares? This book is good enough that if you haven’t read it, it’s worth every penny for the story alone.

And that is the final arbiter of the success or failure of “Villains Month.” Only the reader can determine whether the bad guys wasted your time or stole your heart. And this is one reader who has enjoyed being bad – for a month, anyway.