'Walking Dead': The post-apocalyptic problems you won't see on TV

Feb. 27, 2020 — The Walking Dead returned for the second half of its 10th season Feb. 23, outliving most genre shows (and the majority of its major characters). While I enjoy the series, I have long couch-critiqued TWD and other apocalypse shows for the things they don’t show us that would certainly happen if civilization collapsed. I can guess why: sometimes because those things don’t serve the narrative, sometimes because the F/X would be prohibitive, but also, sometimes, because they’re things nobody wants to see.

So here are my Top 5 Problems of the Apocalypse You Won’t See on TV:

The world is a volatile place. And once humans stop maintaining machines and systems, a lot of things would simply blow up. Among them:

It’s not just volatile things that need human maintenance, either. Without people manning the pumps, many subways and parts of some cities would flood. Roads would become impassable in a few years without repaving projects. Long-forgotten diseases would escape research labs. Magna (Nadia Hilker), a new arrival on The Walking Dead, looks pretty healthy for someone who, until last season, was living on the run from zombies, without  ready access to fruits and vegetables. (Gene Page/AMC)

2) Lord of the Flies

Flies would multiply like crazy, given the number of unburied dead. And if they like zombies — and why wouldn’t they? — the hordes would provide a mobile buffet.

Of course, all insects would reproduce exponentially, including those that are a bane on humans, like lice (everyone would have them), mites, bedbugs, horseflies, ticks, mosquitoes, etc.  And the cockroaches. The many, many cockroaches.

It wouldn’t just be insects. With man knocked off his perch at the top of the food chain, and his numbers (and habitat) vastly reduced, all animal life would expand, resulting in dangerous dog packs, skies blackened with birds and vast herds of small mammals the dead couldn’t catch (rats, mice, squirrels, etc.).

Growing with those populations would be the diseases they carry, from rabies to the black plague. Which brings us to …

3) For Lack of a Walgreens

In most wars, it’s disease that it is the biggest killer. Famously, the “Spanish Flu” of 1918 killed more people than World War I. In the Civil War, only a third of casualties were due to combat — the rest were downed by illness. This would be true in the war against the undead.

That increases by orders of magnitude without modern medicine. The flu, rheumatic fever, polio, syphilis, gonorrhea, tuberculosis, mumps, measles, various poxes — dozens of diseases would once again become global killers. (In the case of STDs, a slow death of pain and madness.) With large numbers of animals living close to man, more diseases would jump species. Pandemics would be frequent and unstoppable.

Add to that medical ills that come from simply living in a primitive world. A cut or scrape can kill, if you don’t have access to a tetanus shot.  Without medical care, a rabid animal bite — or ingesting its meat — means death.  a simple brawl could result in a broken hand bone, internal bruise or dislodged tooth that, without modern care, could allow something opportunistic to kill you.

Toss in the chronic conditions we would no longer control, and the list gets longer. Millions of Americans have diabetes, many of whom might survive the apocalypse in a bunker, only to die for lack of insulin. People with asthma,  COPD or other respiratory illnesses would die without inhalers (or from not being able to run from zombies).  Cancer would almost always be fatal, should you live long enough to get it.

And that brings us to skin lesions. Not fatal, necessarily, but pock-marked, pustulent faces are something no filmmaker wants to shoot, so we never see what would surely be common. Almost everybody would have unhealthy skin (and hair) to some degree, from sunburn, malnutrition, exposure, poor hygiene, radioactive clouds, etc. Add to that chronic conditions  that would go untreated — eczema, seborrhea, psoriasis, etc. — and the living would look an awful lot like the dead. 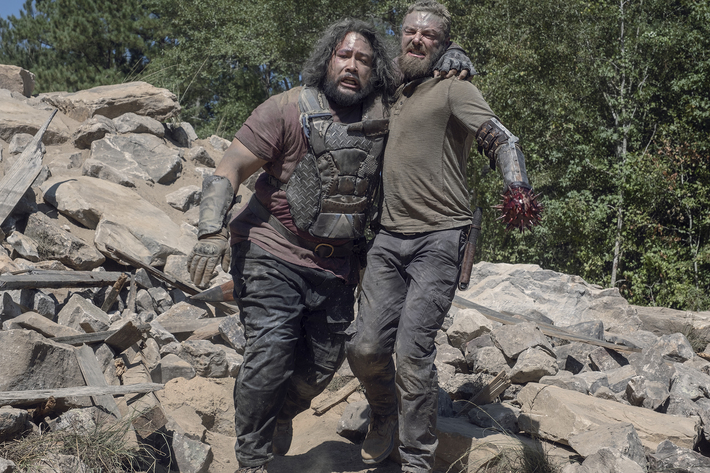 Oh yes, people would be thinking about food a lot. Because they wouldn’t have much of it. With the collapse of the modern distribution systems and farming nigh-impossible, humans would spend almost all of their time hunting and gathering (and running from zombies).

But that’s just the obvious problem. Starvation might be avoided well enough, especially if your group has some hunters or you find a large cache of canned chili. But what about malnutrition?

The hardy survivalist might be able to bag all the deer she can eat, so the protein and fat of a healthy diet would be solved at a stroke. But where’s she going to get her vitamins and minerals? The right kinds of carbohydrates? Unless you happen to live in Florida or California, vitamin C is going to be hard to get — resulting in scurvy, ricketts, beriberi and before that, bad skin, bleeding gums, tooth loss, weak bones, swollen joints, easy bruising and slow healing.

And then there’s water. Drinking out of a stream would likely result in vomiting, as modern man isn’t equipped to deal with unfiltered water. If you’re not in a position to boil water — like if, say, you were on the run from a horde of zombies — you might die of dehydration.

The upshot is this: Getting enough food would be a problem. But if you didn’t get the right kinds of food, you’d end up too crippled, blind or weak to do anything but die. 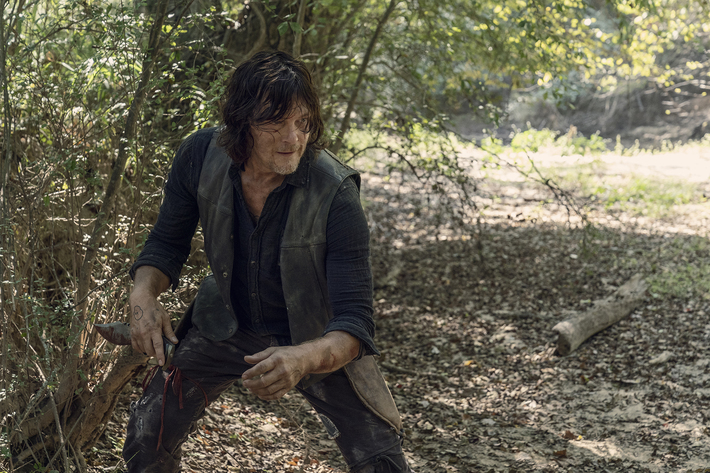 Not only does Daryl (Norman Reedus) show no obvious signs of malnutrition while living in the zombie apocalypse, he’s actually gained muscle mass over the last 10 years. (Jace Downs/AMC)

Poop. OK, done laughing? Because it wouldn’t be a laughing matter in the apocalypse.

Bathroom breaks would have to be done in teams of at least two, so one would always be on guard. In settled conditions, some sort of waste-removal system would be necessary (buckets?), and trips to the latrine (you’d have to dig one anywhere you settled for a while) would also require the buddy system. Camps wouldn’t smell very good, latrines are petri dishes for diseases and their presence would alert the ever-present (on TV) human predators to your location. Privacy would be a thing of the past.

So there are my Top 5. I’ve got more, but I’ve already painted a picture of a world where half of your group would routinely die from pandemics, another third would die from pre-conditions, some more would kick off due to malnutrition, everyone would be covered in bugs and skin lesions, and every time you went to the bathroom you’d have company.

Frankly, the survivors on The Walking Dead seem to have it pretty good.

I stopped watching The Walking Dead some years ago, and I cannot top anything on your list. However, I always wondered if, along with "Walkers" and "Lurkers," there were other zombies we didn't hear about. "Mowers" would compulsively mow lawns while waiting for people to approach, while "Maintainers" would stagger around keeping things like, say, old cars (or nuclear power plants) functional.

I have only ever wandered the first few episodes of TWD. However, one " real world " what-if I thought was - If we saw the apocalypse happening in the area of Atlanta, GA, in the 2000s/2010s - Howcum almost everybody's white? Just askin'.

I think a more dangerous kind of walker would be the ones that didn't walk any more, due to injury or just falling apart. They'd just lie where they fell, in water or a field where grass would grow up to conceal them. So you'd be walking through tall grass (fields would be enormously overgrown) or wading through a stream, and suddenly you'd feel a sharp pain in your ankle ...

Yeah, the NON-walkers would be lying around everywhere, just waiting for you to walk by.

I stopped watching The Walking Dead some years ago, and I cannot top anything on your list. However, I always wondered if, along with "Walkers" and "Lurkers," there were other zombies we didn't hear about. "Mowers" would compulsively mow lawns while waiting for people to approach, while "Maintainers" would stagger around keeping things like, say, old cars (or nuclear power plants) functional.

It's not an original idea, but I'd still like to see the scene where the zombies lurch out of the forest.... and then the crows, insects, turkey vultures, and so forth, descend and take them out.

Similar to the Walking Dead concept, we have the Last Man on Earth concept. With or without zombies, mutants or vampires, eating canned food is presented as a viable option. Maybe for a couple of years at best, but then you have poisonous cans of food.

I remember rolling my eyes in the Will Smith version of I Am Legend. In an early scene he's tearing around Manhattan in a sports car trying to shoot a deer that is leaping about the ruined city.

Those were among the first thoughts that passed through my head as Will Smith was wah-hooing around Manhattan. There are probably a half dozen other problems I haven't thought of.

As to walkers being swarmed by carrion eaters, that would be awesome. However, since we don't see the flies we ought to see, we have to assume that carrion-eaters don't like the taste/smell of walkers. Why? Beats me. But that's what we see.

I also don't understand how walkers walk around without breathing, without pumping blood and without doing any of the other jillion things a living body does that keep muscles and joints working. It's magic.

Most film-makers go for what they think would look cool over what would make sense.

You know. Never believe it's not so.