SHAM COMICS: I somehow missed this when it was solicited and when the first issue shipped although it is right in my wheelhouse. I saw issue 32 on the shelves last week, and luckily, my LCS still had the first issue in stock as well. It is one of those comics that takes comics from the Golden Age and adds new dialogue and captions, but this one is edgier (and funnier) than most. It is of Golden age dimensions with a cardstock cover and printed on white paper stock. Apparently, each issue spoofs a different genre: #1 was super-heroes, #2 was titled “Our Love is a Sham” and features stories by Jack Kirby, Joe Kubert and Frank Fazetta.

X-MEN: GRAND DESIGN: I’ve spoken highly of this series in the past, but the conclusion is really quite clever. [SPOILERS] I didn’t even notice, but after the “Days of Future Past” storyline (circa 1980), this series began tracing the lineage of the alternate timeline. In other words, this series details the history of the dystopian timeline “our” X-Men were able to prevent (or at least postpone). The real split occurs circa issue #272. Prior to that, Kate Pryde did not travel to the past to take over her younger self. The timeline plays out pretty much as we’ve seen, but after the United states bombs Genosha, all bets are off. The end of the series circles back and continues in the X-Men #143 of “our” universe. Pretty cool.

DICK TRACY FOREVER: Issue #3 of this series by “Not Chester Gould” shows us a Tracy who is balding and a Tess who is a detective. In Gould’s Dick Tracy, the villains are gruesome simply because they are evil; in Michael Avon Oeming’s version, he feels the need to “explain” their looks (which are caused by gene editing). His villains (mostly throwaway) include Jung Kim (a.k.a. “Manscape”), Derpy Dan (a.k.a. “Charlie Bumpnuts”), Phyllis Roundsuckle (a.k.a “Knob Nose”), Samantha Seriously (a.k.a “Syrsly Sam”), Flatface, Muffintop, Hashtag, Trigger Warning, Auntie Vaxx, Instal Goram (a.k.a “Fomo”), Jesus O’Reilly (a.k.a. “Tom thumb”), Gerard Sinclair (a.k.a. “Foto Bonb”) and Henry Joe Billy Bob Hank (a.k.a. “Hangry Hank”). It’s almost as if Oeming set out to prove he could create villains just as bizarre as Gould’s, then failed miserably to do so. The next issue will be set in the year 2031.

MMW DAREDEVIL Vol. 7: This volume comprises issues #64-74 (plus Iron Man #35-36) and details the hand-off from Roy Thomas to Gerry Conway. Thomas wrote seven issues, Conway five. (Also, Mike Friedrich wrote one, and scripted one of the Thomas issues.) In his introduction, Roy Thomas referred to Frank Miller’s turning of Karen Page into a porn star as the “nadir of non-inspiration.” Issue #64 features Stuntmaster, as Daredevil follows Karen to L.A. #65 is an even closer homage to Dark Shadows than one of the stories from last volume was. “Brother Brimstone” bears a striking resemblance to Jonathan Frid, and Sally Weston (Karen Page’s roommate and the A.D. on “TV’s top gothic soap opera”) is based on Alexandra Moltke. The second part of this this story takes place at the La Brea tar pits.

#67 features the Stiltman and the Stuntmaster again. Daredevil leaves L.A. but Karen stays. Back in NYC in #68, DD fights Kid Gawaine. #69 features the Black Panther (as well as his brief “Luke Charles” identity). #70-71 is a “socially relevant” two-parter, featuring a conservative cowboy star, Buck Ralston, Walter Conkite and Spiro Agnew. Gerry Conway takes over is #72 with Tagak, the Leopard Lord. The story then crosses over with Iron Man #35-36 by Conway and Don Heck, featuring Zodiac, this time led by capricorn. The crossover is written by Allyn Brodsky (Marvel’s token conservative, perhaps best known for his seven-issue stint on Iron Man).

In issue #74, the entire city of New York is stricken blind, a story which would no doubt rate a summer-long, line-wide crossover today. This volume is not the best, but keep in mind Gerry Conway was only 16 years old in 1969. I wouldn’t read a comic written by a 16 year old today, but it makes a difference that he was 16 when I was five for some reason… it shouldn’t, but it does.

I didn't realize that Conway started so young, almost as young as Jim Shooter, who went pro at 14.

Surprise!  This is the final issue.  A decent story but not exactly the big finish I would have liked to see.  Events in the last couple of issues were hinting that this was probably coming, but I don't follow Bleeding Cool and the like too closely so it still caught me a bit off guard.

Kirkman left plenty of doors open but claims that he just ran out of ideas. Oh well,,, at least the TV show will be less predictable now.

This week I read Martian Manhunter: American Secrets from the early 90's. This was written by Gerard Jones, and thus sadly will never be collected. But the real star here is Eduardo Barretto! DANG! I had always kind of dismissed him as a "workman" artist--perfectly capable of doing a passable job. But no, this showed that he was a maniac! 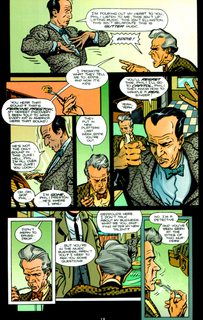 CAPTAIN AMERICA’S BI-CENTENNIAL BATTLES: Last Thursday morning I read the most patriotic comic I own in observance of the holiday. Full Disclosure: If you saw the photo on Facebook, I posed with the original but I read it in the Jack Kirby Captain America omnibus.

BEHOLD… GALACTUS!: Still in a Kirby mood, I read the HUGE “Galactus” edition that shipped a couple of weeks ago (reprinting Fantastic Four #48-50, 74-77, 120-123 and 242-244. I get something new out the Lee/Kirby Galactus every time I read it. A while ago I started reading Marvel Masterworks Fantastic Four and Thor with the respective volumes which chronicled Kirby’s departure. My intention had been to alternate between both series until I got to the Byrne and Simonson omnibuses. I got through one volume each before decided to read Daredevil instead. I will eventually get back to it, but it won’t be anytime soon so I decided to go ahead with #120-123 and #242-244 in this volume.

MASTERWORKS SPREADSHEET: Also on July 4, I loaded all my volumes of Marvel Masterworks on a spreadsheet. At one time, I thought I might host a reading project of the entire Marvel Universe in chronological order, but I doubt I ever will. The spreadsheet will help me to choose the best individual volumes, however (another discussion I have been contemplating for a long time).

ULTRAMAN: Before I began reading the Ultraman manga (discussed elsewhere), I re-read this three-issue mini-series by Dwayne McDuffie and Ernie Colon from 1993. It ties in with the then-recent TV show Ultraman: Into the Future (which I have never seen). The comic recaps the first episode of the new TV series, then recaps the series and picks up where it left off. One thing I hadn’t remembered was that each of the issues carried advertisements for episodes of the series on VHS. Now I’m kicking myself because I didn’t buy them then.

GREEN LANTERN #9: If you’re already reading this series, you know what to expect.

IMMORTAL HULK #20: If you’re already reading this series, you know what to expect.

STAR TREK: YEAR FIVE #3: This issue is a sequel to “A Piece of the Action.” Two things to remember from that episode: 1) the planet’s society was highly imitative, and 2) Dr. McCoy left a communicator behind. When the Enterprise returns four years later, they discover a society, backward-engineered from that communicator, which venerates the Federation. It’s a bit much to swallow that they progressed from the 1920s to space travel in four years, but then again they were just imitating the 1920s, I guess.

MARVEL COMICS PRESENTS #6: Did anyone read this from two weeks ago? Apparently, Marvel dropped a bombshell that issue and didn’t advise retailers to up their offers until it was too late. I made a rare Thursday trip to my LCS that week, so it was sold out. [SPOILER: A character is introduced who might be Wolverine’s daughter. END SPOILER] Cue the speculator frenzy. Marvel is reportedly going back to print with it.

MARVEL EPIC COLLECTIONS: I don’t recall singing the praises of Marvel’s “Epic Collections” Lately, so here goes. The ones I am in the midst of reading now are Master of Kung Fu volumes one and two. This is a series I never read “back in the day.” I bought the first volume last year, but read it so quickly I barely remember it. I thought I’d re-read it before moving on to volume two. This truly is a Golden Age of Comics, if not in terms of popularity, then at least in terms of availability.

I've read and loved Volume One!

Please tell me V2 isn't only available on Earth J.

No, Lee, I assure you that volume two shipped about two weeks ago (I think)... to a comics shop near you (as they say). From what I understand from reading about this series, this is the volume where it gets really good.

I have only a scattering of back issues, so have yet to read the full series in depth.

Truthfully, I was surprised to find Volume 1 to begin with, because I heard there was (allegedly) some issues regarding the Sax Rohmer character(s) that was keeping Marvel from reprinting the series.

But you wouldn't happen to know why Marvel (so far) hasn't including any of the Shang-Chi stories from the Deadly Hands of Kung-Fu black and white magazine, would you?

Seems to me there should have been a couple already reprinted like Marvel did with their Tomb of Dracula collection, combining the magazine with the comic book issues.