Over the weekend I got myself ready for the finale of The Walking Dead comic series by catching up on the three latest collections: Vol. 29-31. I'll be writing a Catching Up blog entry. Still enjoyable, and I feel like knowing the end is near loosened up my expectations a bit.

If I was ever going to choose a comic book strictly based upon the covers, then it'd be Detective 1006 for the art and 1007 for the dialogue.

Spectre: "I am vengeance!"

FANTASTIC FOUE #98: I read this Saturday because what else are ya gonna read to commemorate the 50th anniversary of the Moon landing?

GIANT-SIZE SUPER-STARS #1: I was jonesin’ to read this one for some reason, and did so just because I could.

INVADERS (2019) #1-7: I re-read the entire series to date in anticipation of discussing it in more depth on the “Complete Invaders” thread soon. The seeds of Namor’s redemption have been planted. I also read Tales to Astonish #101, Iron Man & Sub-Mariner #1 and Sub-Mariner #1 to complement Invaders.

MMW DAREDEVIL v10: In this volume (reprinting #97-107 and Avengers #111), Gerry Conway gives way to Steve Gerber and Gene Colan gives way to Don Heck. When I was collecting backissues of Daredevil when I was in college, it was during this run that I tapered off. Honestly, I’ve never been a big fan of Steve Gerber. I read some of his Man-Thing, Howard the Duck and Omega the Unknown growing up, and I thought his Defenders was a come-down from Roy Thomas, Steve Englehart and Len Wein. More recently I’ve come to appreciate his work, but he will never be a favorite.

The standout issue of this series, for me, was #99 featuring Hawkeye the Marksman. It not only featured Hawkeye, but the Black Widow as well, and I had acquired a stack of old Avengers featuring the couple back in junior high school. As I mentioned last time, it was probably Frank Miller’s use of the Black Widow which led me first to backissues of Amazing Adventures and then to Daredevil. Whereas it is true the first Hawkeye limited series led me to seek out some of his significant early appearances, it was actually Hulk #166 which led me backwards into Avengers #109 as well as forward into Defenders #7, and it was Avengers #109 which originally led me to Daredevil #99.

Daredevil #99 did no one any favors! 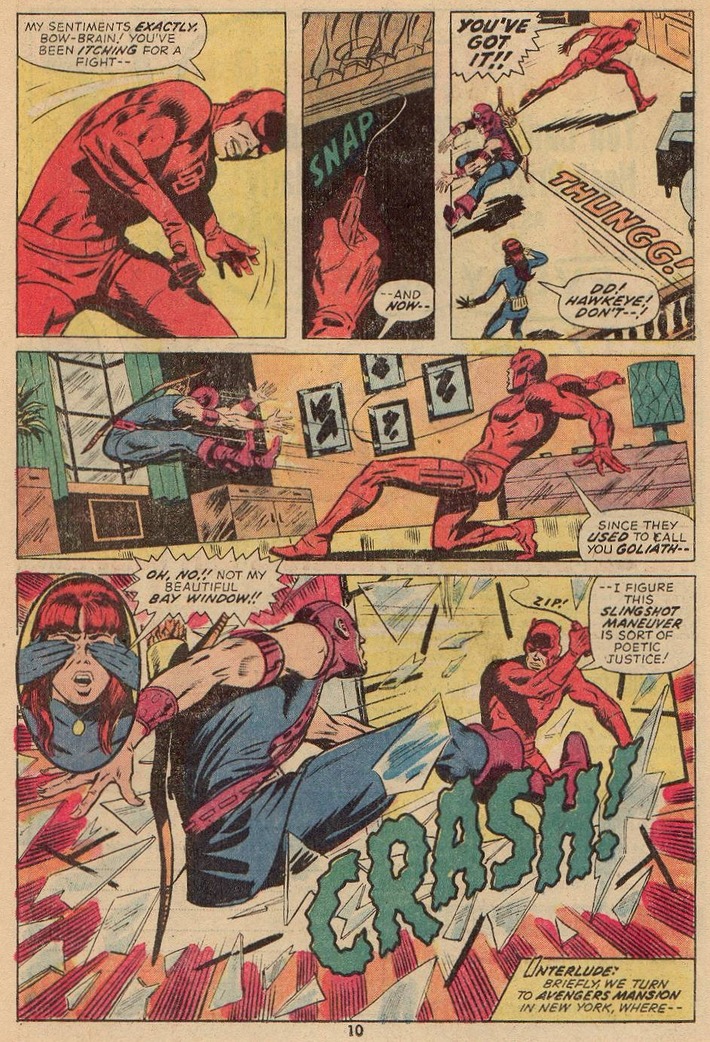 i got from the library the trade paperback of Zatanna, This was a solo series launched in 2010 by Paul Dini that petered out after 16 issues. I recall being intrigued at the time, but with comics prices being what they are, my curiosity wasn't strong enough to add it to my roster.

Maybe I should have. Zatanna the title gives Zatanna the character something she hasn't had through her long existence in the DC Universe: a life. Here, she's a resident of San Francisco, a stage magician who is a superhero on the side, but would rather not be known for that. She uses real magic in her act, but spends a lot of time rehearsing non-magical tricks and illusions for her act.

She also has a frustrating social life. We see her on dates with guys who think she should use her magic to get out of paying the tab at restaurants, which irks her. And she contends with a fair number of magical threats.

It was an entertaining series, even though Dini wasn't the writer all the way to the end.

Maybe so. I don't care about any of that.

Man, I need to get around to reading this whole series. I never have. I think I've only read a couple of arcs, actually.

There's such a slow build to Wes and Dian's relationship and partnership... it's such a pleasure to read!

I need to re-read this series, too. I've read the whole thing, but I was collecting the issues from bargain bins and read some of the arcs out of order.

I find the patience of the book remarkable. I'm 20 issues in, and Wesley has only just resolved to tell Dian he's the Sandman...not realizing she's just figured it out. 20 issues to get to this point! These days, this would be the ending of issue 6.