All you need to understand 'Edge of Tomorrow'

May 27, 2014 -- What if Groundhog Day was set in the future during an alien invasion, the  day kept starting over because the protagonist kept getting killed and it starred Tom Cruise instead of Bill Murray? You’d have the movie Edge of Tomorrow, premiering June 6, and based on the Japanese book All You Need Is Kill. 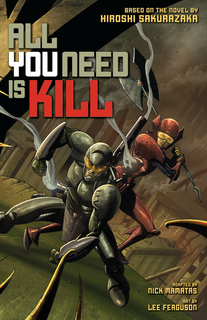 Written by Hiroshi Sakurazaka, the light sci-fi novel All You Need Is Kill was published in 2004 and won the Japanese version of the Nebula Award. It also went into production as both a U.S. and Japanese graphic novel, the American version actually predating the Japanese counterpart.

The Japanese version is being serialized in Weekly Young Jump (Japan) and Weekly Shonen Jump (U.S.), but the American graphic novel is already here. Written by Viz editor Nick Mamatas and illustrated by Lee Ferguson (Miranda Mercury), All You Need Is Kill is already available for about $15.

The premise is that Earth has been invaded by creatures referred to as Mimics, a non-sentient army sent by an alien race to wipe us out. They’re called “Mimics” because they absorb the structures of the first life forms they encounter, which lucky for us, were starfish and frogs – not something naturally dangerous, like bears or sharks or humans.

Earth counters with the United Defense Forces, and it’s unclear from the graphic novel what that is – whether Earth in this near future has managed a united world government, or if the defense forces were created in light of the alien threat, or what. But the UDF is clearly international, and the American and Japanese grunts have a friendly rivalry going on.

One of those grunts is Keichi Kiriya, who – like all the troopers – is assigned a hi-tech battle-suit called a “Jacket,” and sent half-trained into battle. (There’s no time for proper training, because we’re losing.) And, of course, he dies straightaway.

But then an odd thing happens – he wakes up. And on the previous day. And he goes through the whole thing again, Groundhog Day style.

Of course, he gets better at it. It takes longer and longer for the Mimics to kill him, because he’s getting so good at killing them. He has learned not to live, not to die, but rather … well, that all he needs to do is kill. It’s a reference to a samurai saying – “Strike down your enemy, and learn” – not a play on the Beatles song “All You Need Is Love.”

Adding to the mystery, he runs into someone else on a loop – a mysterious female warrior in red armor, Rita Vrataski. (She’s usually referred to by a nickname unprintable in a family newspaper, like most of the dialogue.) The nature of Rita, and the time loops, are all explained in a heartbreaking climax that I won’t spoil for you here.

It’s not Shakespeare, but it’s a good story, and Matamas does a decent job at adaptation. Ferguson’s art is part manga and part Mike Mignola (Hellboy), and is competent. I’d probably be more enthusiastic if if his Mimics looked more like frogs or starfish, like they’re supposed to, but instead they’re really just seed-shaped blobs with spiky appendages growing out of them, which makes them look remarkably like cactus.

Not that it matters for the movie. Obviously, there are going to be a lot of changes made.

For one thing, Tom Cruise is the star, and he doesn’t play Keichi Kiriya. Instead he’s Lt. Bill Cage, which means A) he’s not Japanese, and B) he’s not a grunt. (“I’m not even trained for combat,” he says in one of the clips available on epk.tv.) That changes the story considerably, and we’re not past the introduction. And looking at the cast and crew, there are a lot more named characters in the film than in the graphic novel. (Including a character played by Bill Paxton, who seems to be making a living in genre work, from Aliens to Agents of S.H.I.E.L.D.)

According to an interview with Matamas on ICv2.com, making the graphic novel different from the film was a necessity that the creators turned into a virtue.  He and Ferguson didn’t really know what the film people were doing.

But film adaptations rise and fall on the films they adapt, he reasons, whereas a book adaptation may have a different sales chart. And not being able to ape the film meant Matamas and Ferguson had to find their own path.

“We wanted something that would be experienced differently, both visually and textually,” he told ICv2.com. “ That's why we went with Lee Ferguson's wonderful retro-futuristic look, as opposed to the gritty-realistic near-future look of the film”

And Vrataski isn’t someone Keichi – excuse me, “Cage” – meets in the time loops. In the movie, she’s someone who has been on time loops before, but lost the ability. Now she wants to train Cage to get better at it.

Current plans call for the Japanese version of All You Need Is Kill, both in prose and manga form, to make their way to the U.S. In the meantime, though, we already have our own graphic novel, and our own movie.

The friendly rivalry between the Japanese and American soldiers in “All You Need Is Kill” is unlikely to make the transition to the movie. But in the real world, it continues apace.

Permalink Reply by The Baron on June 14, 2014 at 7:17pm
Actually, the original novel already is available in this country, I read it quite some time ago. I enjoyed the book, but I'm not too enthusiastic about the film. I'm not a big Cruise fan, and I'm not wild about the practice of taking Japanese stories and re-casting them with Western actors.