The comics world is in mourning this week as a giant has passed. Joe Kubert died Aug. 12 at age 85. 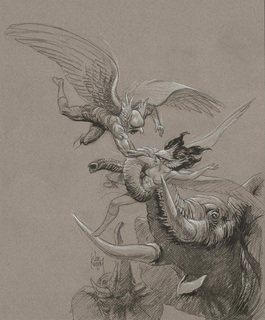 Kubert isn’t a household name, but if you’ve ever read a Sgt. Rock comic book, you’ve probably seen his work. In addition to decades on DC’s war titles, Kubert was famed for art on the original Hawkman of the 1940s, and for co-creating the modern version in 1961. He was also know for “Tarzan,” and has drawn virtually every DC character at one time or another, in a professional relationship with the publisher that stretches back to World War II. Kubert also drew award-winning graphic novels, and has been inducted into both the Eisner and Harvey Halls of Fame.

But Kubert’s legacy is more extensive than most artists, no matter how long-lived. For one thing, he and his late wife Muriel established The Kubert School in Dover, N.J., in 1976, training new generations of comic-book artists. His sons Adam and Andy are carrying on the family tradition, as both are successful comic-book artists.

Further, Kubert is remembered as a generous and gentle man. The outpouring of grief after Kubert’s death was a mix of both respect and affection. On Twitter, artist David Mack referred to Kubert not only as “a legend and master storyteller,” but also as “incredibly kind.” Stephen Bissette, one of The Kubert School’s first generation of graduates, who gained fame on “Swamp Thing,” posted a lengthy and heartfelt tribute on his website (srbissette.com) that ranged from personal affection to professional admiration.

Kubert’s story runs parallel to that of the comic-book industry itself. Born in what is now Ukraine in 1926, Kubert emigrated with his family to New York as an infant. He sold his first professional comic-book art at the tender age of 12 in 1938, when the industry was just getting started. He continued drawing for various publishers through his teen years, eventually landing at All-American Comics, which was later absorbed into what is now DC Comics. It was there he did his well-known work on Hawkman (beginning in 1945), but also on characters like Dr. Fate, the original Flash, Johnny Quick, Sargon the Sorcerer, the Seven Soldiers of Victory, Vigilante, Wildcat and Zatara the Magician.

Kubert worked for various publishers through the 1950s, co-creating the prehistoric hero “Tor” and pioneering 3-D comics at St. John, then co-creating “Viking Prince” at DC. In 1959, Kubert co-created (with writer/editor Robert Kanigher) the character he is most associated with, Sgt. Rock. Kubert remained with “Sgt. Rock” in one capacity or another until the book’s cancellation in 1988, and was in charge of all of DC’s war books from 1967 to 1976.

Typically, the self-effacing Kubert credited Kanigher as the true creator of Sgt. Rock in the Foreword he wrote for “Sgt. Rock Archives Volume 1.” Still, he remembered his time with Rock as “a lot of drawing. A lot of pages. A lot of covers. A lot of late nights. A lot of deadlines. And a lot of personal pleasure and satisfaction.”

Kubert’s career only got bigger and more varied from the 1960s on. He drew two comic strips, “Tales of the Green Berets” (1965-67), and faith-based strips for the Jewish children’s organization Lubavitch in the 1980s. Kubert drew a highly-praised run on “Tarzan” in the 1970s, and co-created “Ragman” in 1976 – the same year he founded The Kubert School.

Later decades saw a stream of graphic novels, two of them starring Sgt. Rock. In 2007, Kubert wrote and drew “Fax from Sarajevo,” collecting wartime faxes and remembrances from a survivor of the Serbian siege of the capital of the former Yugoslavia, for which he received both Eisner and Harvey awards.

Most recently, Kubert inked the miniseries “Before Watchmen: Nite Owl,” over the pencils of his son Andy. Characteristically, Kubert was still looking ahead to his next project when death overtook him, a six-issue miniseries titled “Joe Kubert Presents” with a new Hawkman story. The first issue is scheduled for an Oct. 31 release.

I’ll be there for that first issue, as I have for most of Kubert’s wonderful work over the years. There’s little I can say to add to his stature, but fortunately I don’t have to. Kubert himself has left us an enormous body of stories and artwork stretching back to the 1930s, a legacy that speaks more eloquently than I ever could.

Considering when the news first broke, it was late last Sunday evening and details were sketchy at best, I was originally hoping the announcement was a mistake.

But when officially confirmed, I started thinking about Kubert's influence not only upon me, but comics in general.

While I was never a big fan of war comics, there was no denying the power and honesty of his art presenting both World Wars as they were, and not some glorified movie or TV version suitable for viewing.

His work on DC's adaptation of Tarzan gave me new insights into the jungles of Edgar Rice Burroughs. Whether it be Tarzan or Tor, one man against an ape? Kubert's work inspired the Big Louie character in Hugh Monn, Private Detective more than any other DC gorilla.

Having been drawing since the Golden Age, his superheros looked super while still being human(oid) beings. Next to Gil Kane, Kubert's anatomy of the Human figure was the most realistic, even if the character(s) he was drawing weren't.

I never had the honor of meeting the man, and never got the chance to attend his school because it never offered writing courses, but he has entertained and educated so many that Joe Kubert should immediately be inducted into any applicable Hall of Fame if he isn't already there.

My condolences to his family, friends, students, and fans. He was a talented man who will sorely be missed in this age of skin tight spandex and computerized art.

Pulled out my copy of Showcase Presents Sgt Rock vol.3 in memory of Joe K. It is amazing how a man with a relatively loose art style was able to portray weapons, tanks, planes and people in a seemingly realistic manner.