The Flash has always been an important character in DC Comics mythology, and Francis Manapul and Brian Buccellato, co-writers of the super-speedster’s newly re-launched title, plan to keep it that way. “I think he’s a central character,” Buccellato, who is also the Flash colorist, said in an interview. “Through the course of history, The Flash has meant an awful lot to the DC Universe. He’s been a part of a lot of landmarks. And also in terms of powers, the dude can do a lot of things. I think he gets sold short a little bit. Power-wise, I think he’s up there with Superman.”

Manapul, who is also the Flash artist, agreed. “The Flash has been there for major turning points in the comic-book industry,” he said. “In terms of how I look at him, I think what I really like about The Flash is the sense of hope and optimism that the character brings.”

The Flash has a long legacy, stretching back to 1940, when the first Wizard of Whiz was introduced and appeared in various books for 11 years. The second Scarlet Speedster began in 1956 – launching a superhero revival called the “Silver Age” – but was killed and replaced in 1986 with yet a third (and later fourth) Flash. But in 2008 DC’s Chief Creative Officer Geoff Johns resurrected the second Crimson Comet, a forensic police scientist named Barry Allen, who stars in the current “Flash.” That series is only now approaching its third issue, as it was re-launched with DC’s other 51 “DC Universe” titles in September.

Now, the knock against Barry Allen – and why he was “dead” for 22 years – has always been that he’s so perfectly heroic that he’s perfectly boring. But Johns added some angst with the recent Flashpoint miniseries (available in hardback, $22.99), which included a shocking development in the death of Allen’s mother that has added considerably to his personality and motivations. And clearly Manapul and Buccellato don’t think Allen’s true-blue heroism is boring; in fact, they consider it a plus. 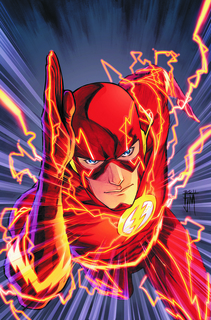 “What makes him special is that he comes from a time when a hero was a hero because that was the right thing to do,” Manapul said. “It’s the kind of hero that I think a lot of us, when were kids, aspired to. Now with the way the industry is, there are a lot of anti-heroes. It’s cool and it’s popular, but it’s not at the core of what a hero is about. I think [that heroism] is what The Flash represents to me. I think you’ll see throughout the first year that we’re constantly putting that in contrast both in terms of the thematic story as well as visually. He is the brightest thing that you’ll see on the page, and that’s not by accident.”

“Flash doesn’t have any other agenda than to be heroic and to do the right thing,” Buccellato added. “He’s very simple in that way and I think it’s refreshing. Because, like Francis said, we’ve had a lot of tortured heroes for a while and it’s nice to see somebody who’s going to stand up just because it’s the right thing to do.”

And crack off the bat Manapul and Buccellato have added to The Flash’s bag of tricks with “augmented cognition;” it’s a logical progression that a man who moves faster than the speed of sound would think faster, too.  The pair are using the real science of augmented cognition as a guide, which will have some unexpected ramifications beginning with issue #3. Using realistic science, Manapul said, is one of the “anchors” the co-writers hope will keep this fast-moving book grounded.

And, of course, a book written by two artists will be one of the most visual on the stands. 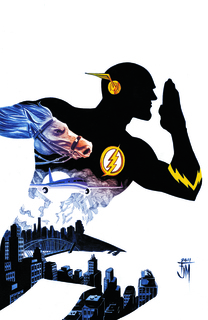 “It’s not an accident that Flash is the only thing that’s red in the story,” Buccalleto added. “It’s clearly an intentional thing and it helps you understand that he’s the focal point.”

And it’s a hopeful one.

“What really inspired me as a comic-book reader when I was a kid … was hope,” Manapul concluded. “I want people to come off reading our comics feeling a sense of hope. That’s been our goal from the beginning.”

1. The Flashpoint story put The Flash through an emotional trauma. Courtesy DC Entertainment

2. Flash was re-launched with this first issue in September. Courtesy DC Entertainment

This is my favorite book of DC's relaunch -- like Batwoman and Daredevil, every issue is visually amazing, and it has the added bonus of starring my favorite character, ever. I was wary of Barry's comeback (can't have those memories tarnished!), but Manapul and Buccellato have sold me in a big way!