In 2004, Superman took one of his periodic absences from his own titles- he was recuperating in outer space or something like that- and DC took the opportunity to showcase Majestic as a guest star.   After Superman’s return, Majestic attempted to make his way back to his own universe.  But first, he made a stopover in his own mini-series. The first issue sets up two significant relationships: the uneasy alliance between Superman and Majestic and the feud between Majestic and Eradicator.  Majestic has been an unrelenting replacement for Superman and Superman suggests that Majestic needs to spend more time with humans so that he understands the people he’s supposed to be protecting.  Meanwhile, Eradicator wants to kill Majestic and an attack at the end of the first issue disrupts Majestic’s attempt to return home.

Majestic is injured in the resulting explosion.  In the second issue, he signs up for a rented room and a job as a school groundskeeper.  While it appears that Majestic is taking Superman’s advice, we soon discover that Majestic is suffering amnesia after the explosion and doesn’t realize he’s a superhero. 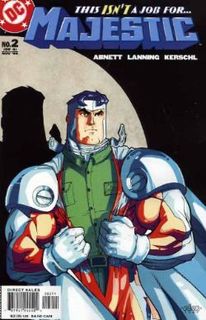 The mini-series now shifts focus to Majestic’s relationships with the landlady and her son.  The young boy, Elijah, idolizes superheroes and starts to suspect that Majestic might be one (even though Majestic doesn’t know it himself).  Ellen, the mother, is more cautious.  Her husband was a firefighter.  In her eyes, he died in a fire because he pushed himself too hard trying to live up to the impossible standard set by superheroes.

It’s a significant shift in tone yet it works well.  The first issue was mostly standard superhero fare- a conversation between two guys in capes, sandwiched by a couple of lengthy fight scenes.  But the middle part of the series explores the themes raised in that conversation in unique and interesting ways.  Majestic, now going by the name “Jim,” has to try to win the mother’s approval without resorting to super-heroics.  Yet it’s not a Silver-Age Superman type ruse- he honestly doesn’t know he’s a superhero.  Meanwhile, Elijah is the intrepid detective trying to figure out Jim’s secret.  Those twists on otherwise classic scenarios make the middle issues of Majestic entertaining and fun to read. Of course, Majestic isn’t all light.  A few interludes remind us that Eradicator is still out there, hunting for Majestic.

The story moves along at a refreshingly brisk pace.  In the third issue, Elijah intentionally puts himself in harm’s way by jumping off of a roof.  The foolish ploy actually works.  Majestic still doesn’t know who he is but his instincts take over.  He flies to the rescue, unwittingly revealing to the family and to himself that he’s a superhero.  Ellen confronts Majestic about his supposed duplicity.  But when Majestic confesses to his amnesia, Ellen is the one who helps him figure out his identity by looking through old newspapers.  In another nice twist, Majestic wins Ellen’s favor, not through his super-abilities, but through his vulnerability.

Naturally, that tender scene is interrupted as an enemy bursts through the wall.  However, in another unexpected surprise, the enemy is a Daemonite droid sent to assassinate Majestic, not Eradicator.

In the final issue, Majestic fights the Daemonite droid.  He demonstrates his newfound appreciation for humanity by trying to take the fight away from the house and by encouraging Ellen and her son to run to safety.  Eradicator arrives in the middle of the fight.  But while Majestic prepares to fight two enemies, Eradicator turns his attention to the droid. 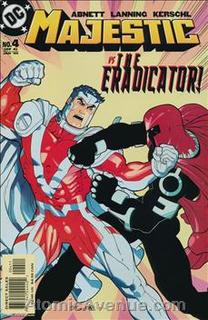 The two supermen defeat the droid through their combined efforts.  Eradicator accepts a truce.  Majestic rebuilds the house.  Superman drops by for a visit.  And everyone learns a lesson.

Unfortunately, the lessons are too pat.  They’re simplistic, especially compared to the creative twists on classic scenarios earlier in the story.  During the fight, Elijah is trapped in the wreckage of the house.  Majestic isn’t able to rescue him while simultaneously holding off the droid.  There are a few moments of panic when Elijah can’t feel his legs and Ellen can’t rescue him.  Yet, by the time, Majestic and Eradicator defeat the droid, Elijah is safe and sound.

Elijah sustains no injuries that might cause him to question his blind faith in superheroes.  That would have been a tragic and interesting twist- Majestic wins the admiration of the mother while losing the admiration of the son.  In another scenario, Ellen could have been confirmed in her earlier suspicions.  Even unintentionally, Majestic had put her family in danger.  That would have been another interesting yet tragic turn of events- after winning her affection with his vulnerability, Majestic loses it again through no fault of his own.  In yet another scenario, we could have seen local firefighters rescue the family from the collapsed building while Majestic continued his fight with the droid.  That too would have been more interesting- Majestic inadvertently restored Elijah’s estimation for his firefighter father.

Yet, despite the many possibilities, the writers went for the pat resolution- Majestic beats the bad guy, winning the day and the girl.  Even though it was a happy ending, it was a disappointing letdown for an otherwise interesting story.

I remember liking this book, but I remember Kerschl's art more than anything. That's really when he came into his own.

I really enjoyed Joe Casey and Ed McGinnis's miniseries, but I can't remember exactly when it came out. Early 2000's, surely. It had a lot of crazy Joe Casey ideas in it, and shows what a Silver Age Superman would be like in modern day. Really well done, and a very attractive book.