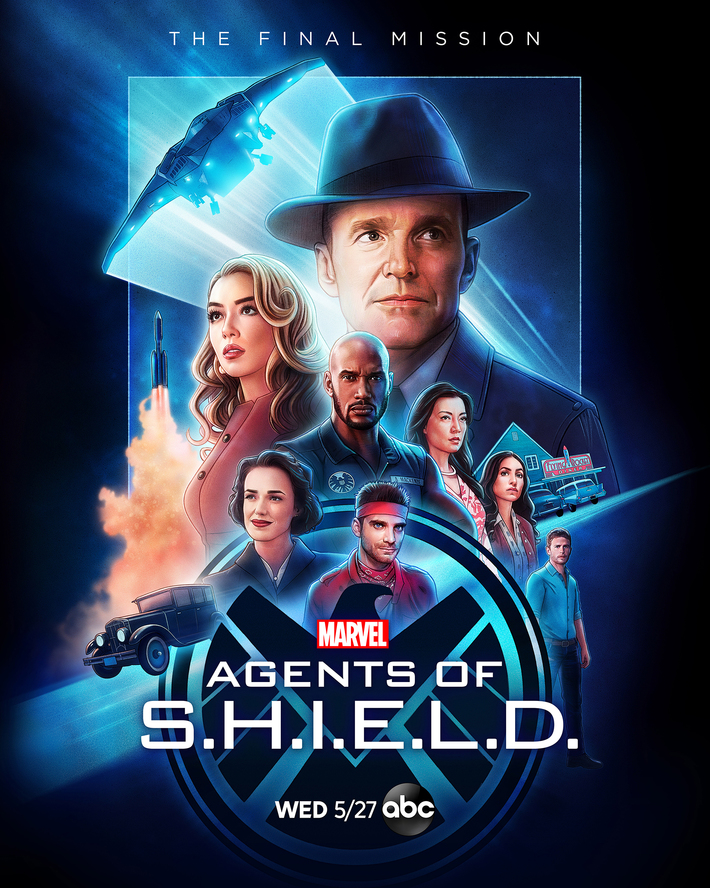 Key art for the seventh season of Marvel’s Agents of S.H.I.E.L.D. shows the main characters for the season premiere, as well as the milieu: 1931 New York City. (Courtesy ABC)

Well, for 13 episodes. The seventh season — and the series — comes to an end Aug 12 with back-to-back episodes scheduled for the Disney-owned network ABC. Still, it’s nice to have Director Mackenzie (Henry Simmons), Agent Johnson (Chloe Bennet), Agent May (Ming-Na Wen) and the rest of the merry crew from the Strategic Homeland Intervention, Enforcement and Logistics Division back for a little while. I’ve missed them!

You’ll note I didn’t mention series star Clark Gregg. That’s because his character, Phil Coulson, died (for the second time) at the end of season 5. And he’s still dead.

Which hasn’t stopped Gregg from being on the show! On season 6 he appeared as “Sarge,” an entirely different character, who was an alien shapeshifter that had taken Coulson’s form. (Spoiler: He came to a bad end.) In season 7, Gregg re-appears as an LMD (Life Model Decoy) of Coulson, a realistic android who, of course, looks and acts just like the real thing. 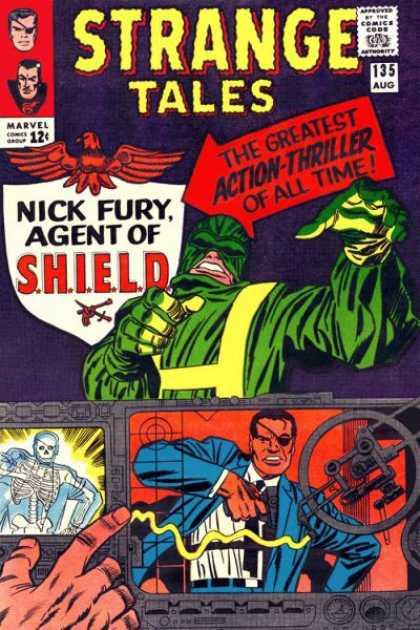 The LMDs in that story are very literally decoys, sent out to distract Hydra agents who planned to assassinate Nick Fury, S.H.I.E.L.D.’s choice for a new director. (Hydra had succeeded in assassinating the previous director.) And sure enough, Hydra assassinated all the LMDs, while the real Fury was smuggled into the helicarrier. (Yes, those awesome behemoths were dreamed up in the first story, too!)

And LMDs have continued to be a vital part of the Marvel Universe in comics. Nick Fury (the white one, before Sam Jackson), “died” so many times, only for the corpse to turn out to be an LMD, that it became an in-story running gag. For years nobody ever knew whether they were talking to the real Fury, or a robot. That was pretty handy for the nation’s top espionage officer.

One story, Nick Fury vs. S.H.I.E.L.D. (1988), had virtually the entire supporting cast killed off and replaced by LMDs. When Nick Fury, Agent of S.H.I.E.L.D. was revived in 1989 as a monthly title, Marvel quickly did a two-step and revealed that all of them were still alive, merely held prisoner by the LMDs. Otherwise, presumably, the book would have been titled Nick Fury, All By His Lonesome.

Now, Fury’s longevity — the one who fought in World War II — has long been explained by a chemical called the “Infinity Formula,” which blah blah mad scientist blah blah immortality blah blah. Since two of the “Howling Commandos” of World War II were similarly long-lived, it was assumed that Timothy Aloysius “Dum Dum” Dugan and Gabriel “Gabe” Jones were also partaking of the Formula.

But not so! It turns out that Dugan was killed in 1966, and SHIELD scientists managed to preserve the body, and Dugan’s brain, in order to somehow pipe Dugan’s mind (soul?) into an LMD of Dugan. So that’s who been at Fury’s right hand, never aging, ever since! (No explanation is necessary for Jones, who retired in 1988, and died in 2010.)

In 2014, Dugan (played by Neal McDonough in the Marvel universe, an actor who went on to be bad guy Damian Darhk in The CW’s Arrowverse), was not pleased when he found out what Fury had done. He killed himself, with orders for the LMD to not be re-created.

But you know how that goes. Currently Dugan, as an LMD, leads a new Howling Commandos, a quasi-military squad made up entirely of Marvel monsters (who are nevertheless good guys). They are agents of S.T.A.K.E. (Special Threat Assessment for Known Extranormalities), because Marvel just can’t let a good acronym go to waste.

My point, if I have to make it, is that the TV show didn’t just invent this LMD business out of whole cloth to justify bringing Gregg back. The LMD option, part of the S.H.I.E.L.D. mythos for more than five decades, was hanging there as low fruit.

Meanwhile, Marvel’s Agents of S.H.I.E.L.D. season 7, episode 1, offers up some more surprises. For example, the agents have discovered that the alien, robotic Chronicoms — which I keep mispronouncing “Comic Cons” — have gone back in time to eliminate S.H.I.E.L.D., so that the planet will be easier to conquer in the present. Our main cast travels to 1931 in pursuit. (Yes, time travel. Keep aspirin handy for the inevitable paradox headaches.) Director Alphonso “Mack” Mackenzie (Henry Simmons) goes back in time to 1931 on Marvel’s Agents of S.H.I.E.L.D., when people really knew how to dress. (ABC/Mitch Haaseth)

This is fantastic, because a great many cool possibilities present themselves.

For example, in the season’s first episode the team meets Franklin Delano Roosevelt (Joseph Culp) when he is still governor of New York. S.H.I.E.L.D. presents a historically accurate FDR, using a wheelchair due to childhood polio. Some people are completely unaware of FDR’s disability, because reporters in those days simply didn’t mention it, out of a sense of decorum. (“This’ll be our little secret, eh?” FDR says to the agents.)

The agents also meet Wilfred “Freddy” Malick (Darren Barnet), the father of Hydra head Gideon Malick (Powers Boothe), who threatened the team in earlier seasons. And they have to save Freddy, so that history isn’t changed. (Johnson: “So you’re saying, to save S.H.I.E.L.D. …” Coulson: “We have to save Hydra.”)

Time travel gives the show an excuse to bring Patton Oswalt back, which is always welcome. He appears as Ernest Hazard Koenig, the grandfather of the Koenig quintuplets we know from earlier seasons (Billy, Eric, L.T., Sam and Thurston). Grandpa Koenig runs a speakeasy that, in later years, will become a S.H.I.E.L.D. asset.

IMDb lists another familiar face in coming episodes: Daniel Sousa (Enver Gjoka), who appeared in Agent Carter as an agent of S.H.I.E.L.D.’s predecessor , the S.S.R. (Strategic Scientific Reserve). In the season's second episode the team hits the time stream again, which will likely land them in the late '40s, when Agent Carter takes place. Depending on how you interpret the time-travel shenanigans in Avengers: Endgame, it's possible that not only is Agent Carter present, but so is Steve Rogers! It's unlikely we'll meet them -— neither Hayley Atwell nor Chris Evans are listed in the credits — but they could be referenced or act off-camera. (Toldja to keep the aspirin handy.)

Meanwhile, our team remains in the past for now, and perhaps the whole of the season. (That’s one way for S.H.I.E.L.D. to completely ignore the Marvel Cinematic Universe, and vice versa.) I’m pleased to see that this smart show, unlike some others I could mention, doesn’t ignore how women and minorities were second-class citizens only 90 years ago. (Some would argue they still are.) The prejudice, bigotry and casual cruelty of racism and misogyny are understated, as they need to be — it’s too big a subject for an action/adventure show that has a different story to tell — but still powerful. It’s a welcome sequel to Agent Carter, whose subtext was a career law-enforcement woman battling male chauvinism with nerve, brains and achievement. 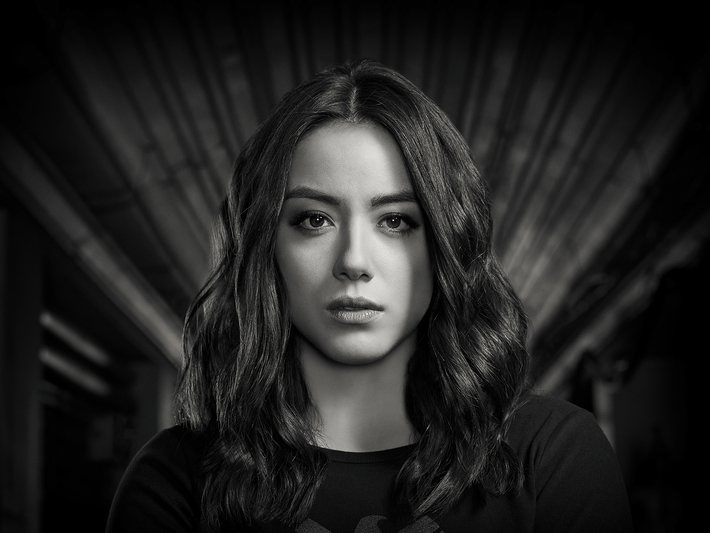 Chloe Bennet stars as Daisy “Quake” Johnson on the final season of Marvel’s Agents of S.H.I.E.L.D., but the character’s journey may not end there. (ABC/Matthias Clamer)

But there may be more!

According to intrepid entertainment reporter Mikey Sutton (pcutsmag.com, comicbookmovie.com), there’s a lot of talk about post-S.H.I.E.L.D. appearances of the agents, especially Daisy “Quake” Johnson, possibly even an Agents of S.W.O.R.D. series at Disney+. (The Sentient World Observation and Response Department is Earth’s defense against aliens, headquartered in a floating satellite called The Peak, which is probably what Nick Fury was building at the end of Captain Marvel.)

“In December, photos leaked from WandaVision with the S.W.O.R.D. logo,” Sutton said. “What I've been hearing lately is that show will push the cosmic narrative of the MCU further, featuring IPs reacquired from the Fox purchase that Disney feels aren't significant enough for theatrical releases, such as The Brood. It would also become a gateway for fringe mutant characters and introduce and test other superheroes for the MCU.”

And Daisy? “They do intend on bringing back Chloe Bennet as Quake, and some others from the AOS cast, but no negotiations yet.”

Which would be awesome. So keep the faith, Quake-o-philes. And in the immortal words of Jason Sitwell, circa 1966, “Don’t yield! Back S.H.I.E.L.D.!”