Black Canary finds her voice in YA graphic novel 'Ignite' 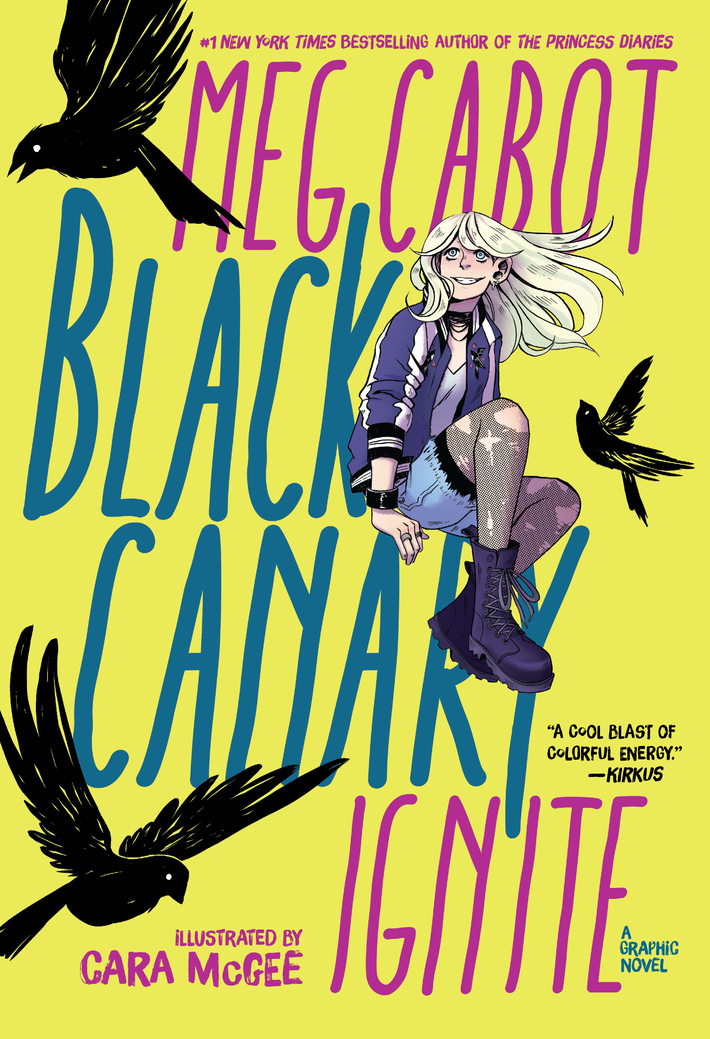 It’s a question that each of us must answer on our own, usually in adolescence. But when you’re a 13-year-old Dinah Lance, it has a more literal meaning, because her voice is the famous sonic weapon used by the superhero Black Canary. That’s the concept behind the latest outstanding Young Adult graphic novel from DC Comics, Black Canary: Ignite ($9.99).

DC Comics has been killing it with their YA line of GNs, from the continuing stories of the Super Sons (male offspring of Batman and Superman) to Dear Justice League, a charming collection of questions (from youngsters) and answers (from Superman & Co). Ignite arrived on Oct. 29, and joined the A-list immediately – as you’d expect, given its provenance. Black Canary: Ignite is illustrated by Cara McGee, who proved her knack for the field in Dodge City. And it’s written by Meg Cabot (photo at left), who has long since proved her chops involving romance and/or paranormal fiction about teens and young adults, with series like Allie Finkle’s Rules for Girls, From the Notebooks of a Middle School Princess and The Princess Diaries.

None of which, to date, involved superheroes. So how did McGee find her way from Avalon High to the DC Universe? To find out, the thing to do was ask her.

“I heard from my agent that DC was looking for authors to write graphic novels targeted at YA and middle-grade readers,” she said. “They claimed there were no particular characters they had in mind, but I had a feeling they were going to be getting a lot of Batman and Wonder Woman pitches. So I did a lot of research on lesser known characters, and stumbled across Black Canary, with whom I instantly connected. I wrote a detailed pitch for her, then hoped no one else had beat me to it. Fortunately for me, it worked: DC accepted my proposal.”

And clearly, Cabot did a LOT of research. Black Canary has put in a lot of miles since her 1947 debut, joining the Justice Society (of Earth-2), then the Justice League (of Earth-1), then being retroactively turned into the daughter of the original, and therefore the daughter of a police officer instead of the wife of one. And that doesn’t even include her now-erased long romance with, and marriage to, Green Arrow. Or her 2011 “New 52” reboot, where she got a lot younger, much of history evaporated and she became, as the Moody Blues once understated, just a singer in a rock ‘n’ roll band.

None of which matters in Ignite. Cabot stripped away what didn’t click, and kept what did.

“I’ll admit I hadn’t heard of Black Canary before, but once I found her and started researching her, I was totally intrigued,” Cabot said. “The character has such a rich backstory to draw from, thanks to the many talented writers who’ve worked on her character in the past. I felt like in many ways the original seemed the most special, and also the most relatable to today’s audiences – not only because Dinah inherits her superpower from her mother (hello Ancestry and Me) but because I was often told as a child that I was too loud, and I have a brother who is a police sergeant, and his daughters have expressed interest in following in his footsteps … and just like Dinah’s dad, this makes him nervous. Everything about Dinah's story – especially the part about not being afraid to use your voice – feels very timely to me, even though it’s nearly 75 years old.”

So Ignite stands on its own, and doesn’t require a prospective reader to be a BC expert to join in the fun. That sense of freshness is enhanced by McGee’s charming, uncluttered art, and by Cabot’s own voice, which added new elements to what amounts to an origin story we’ve never seen before. 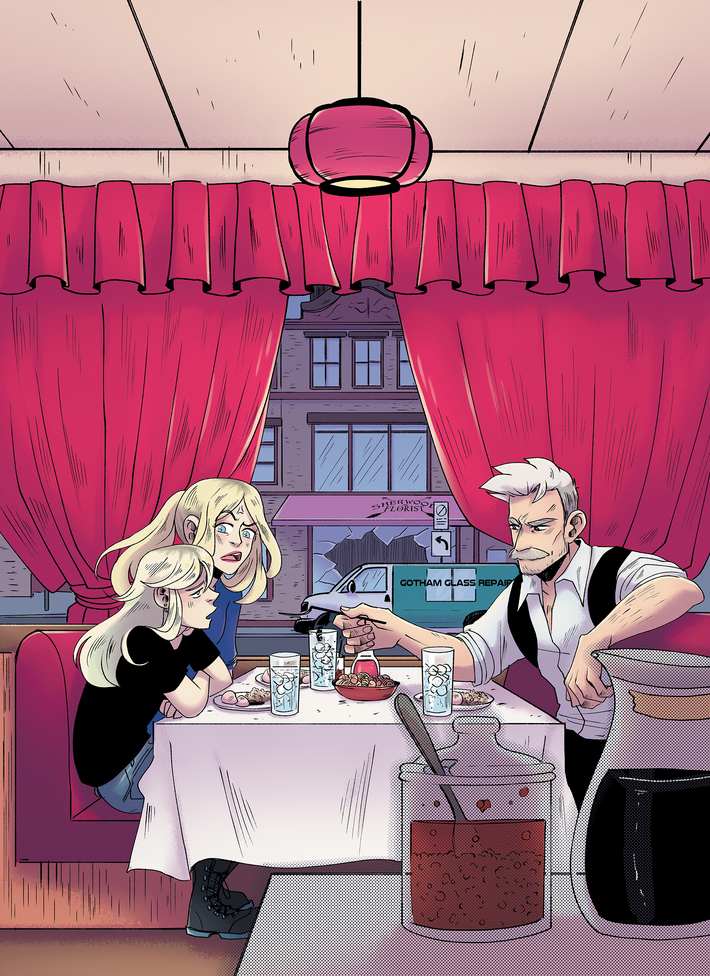 In addition to Kat and Vee, supporting characters in Ignite include Mom (the original Black Canary, back left) and dad, Lt. Lance of the Gotham City Police Dept.

Like Dinah’s friends Kat and Vee, who are also bandmates in their wannabe combo. They are more or less new – Kat is the daughter of Gotham City District Attorney Van Dorn, a long-running character – and vital to what makes the book work.

“It was important for this book for Dinah to have friends, and for those friends to have moms that, like Dinah, they get along with,” Cabot said. “It was important for Dinah to have girlfriends in the book because in writing books for middle-grade readers for so long, I know that the one thing they like better than superhero stories is stories about friendship – particularly fractured friendships or friendship problems. It’s just something readers that age are going through a lot themselves in their own lives, and so something they enjoy reading. I think it’s nice to throw in a little bit of realism and relatability in a book that is otherwise pretty unbelievable!”

“Unbelievable”? Well, there is that part about her mom having once been a superhero. And the fact that Dinah’s voice is now breaking glass and knocking things over. Oh, and there’s that shadowy figure in the background, bent on some sort of revenge on the Lance family.

Which isn’t really all that hard to swallow. Plus, there’s all the effort Cabot puts in to make these kids feel real and relatable.

“I spend a lot of time with young people (and of course was young once) and the one thing I notice is that although the technology changes, the problems never do,” she said. “Kids used to write nasty things about one another on the bathroom walls at school; now they do it on Instagram (or whatever). It hurts just as much, and parents and teachers still often feel powerless to help. Crushes are called crushes because they still, more often than not, crush one. And almost everyone still gets a D in Algebra (and it will still be all right).”

But, unlike Cabot’s other writing projects, this one has “graphic” in the name, so the artist is vitally important. Here’s how that went down:

“DC sent me the work of several artists who might be available for the project,” Cabot said. “I immediately liked the youthful vibe of Cara’s previous work. We asked Cara to do a preliminary sketch of Dinah as a young girl and she just nailed it. The Dinah you see on the page in the book is the exact Dinah drew as her sample. We really needed a 13-year-old Dinah and that’s exactly what Cara delivered from the start. It was fantastic. Cara was the one who recognized that kids might want to cosplay Dinah, and so she was careful to give Dinah a new Black Canary costume that still looked enough like the old one but that any kid could easily get their hands on (bicycle shorts, cut-offs, combat boots, scruffy black jacket, black mask) and would also be Mom/School Approved, and not the highly sexualized Dinah of the past.”\But learning the ropes, as every novelist says who enters the comics field, involves the use of a new set of muscles. Thanks to some movie experience, Cabot had a head start on the learning curve: 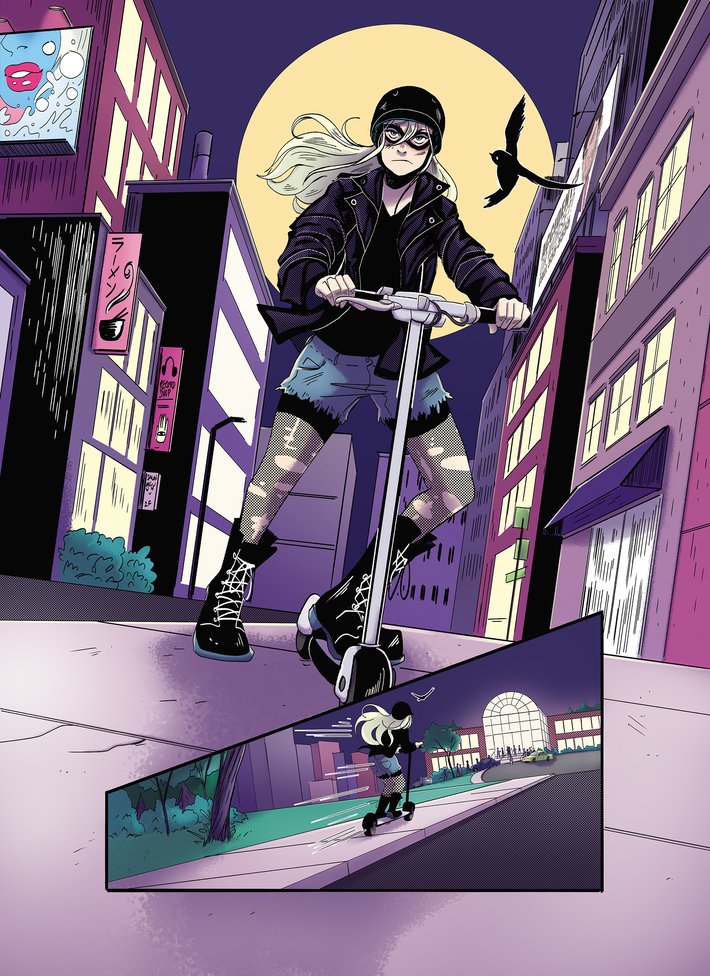 Yeah, it looks more like a homemade Halloween costume than a superhero uniform. Which is why it works so well in the down-to-earth Ignite.

“I had no idea writing a graphic novel would be so different than writing a novel!” she said. “It’s more like writing a screenplay (which I did for the movie ‘Ice Princess,’ starring Michelle Trachtenberg and Kim Catrall), although even more work, because the writer has to describe what’s happening in every panel.

“But Cara Mcgee took the panels I described in words and turned them into living tableaus! She gave the characters so much more emotion than I could ever have been able to convey through mere dialogue. And, of course, Caitlin Quirk did a beautiful job with all the colors, creating such a buoyant and vibrant mood. Receiving the drawings at every stage (rough sketch, then inked, then colored) was the best part of the process! I wish I could do that for all my books!”

Books which will, hopefully, involve another Black Canary GN. Now that we’ve met Dinah, we’re pretty invested in finding out how her band makes out, if she’ll ever convince her dad to let her be a cop, and how Kat and Vee deal with all these changes. Oh, and the superhero stuff is interesting, too! 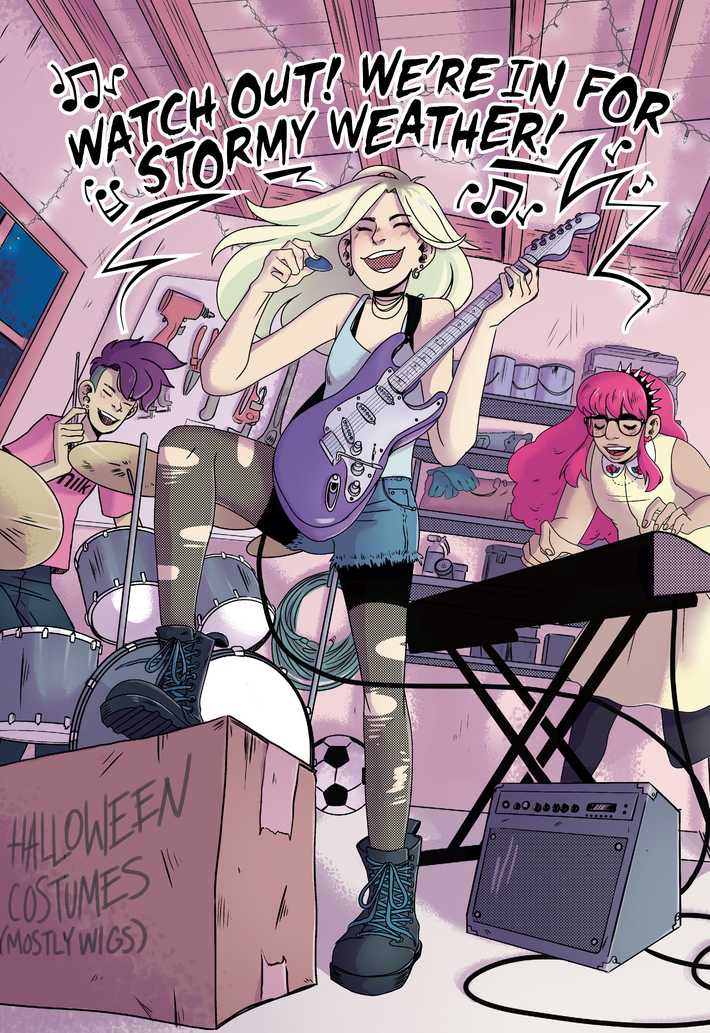 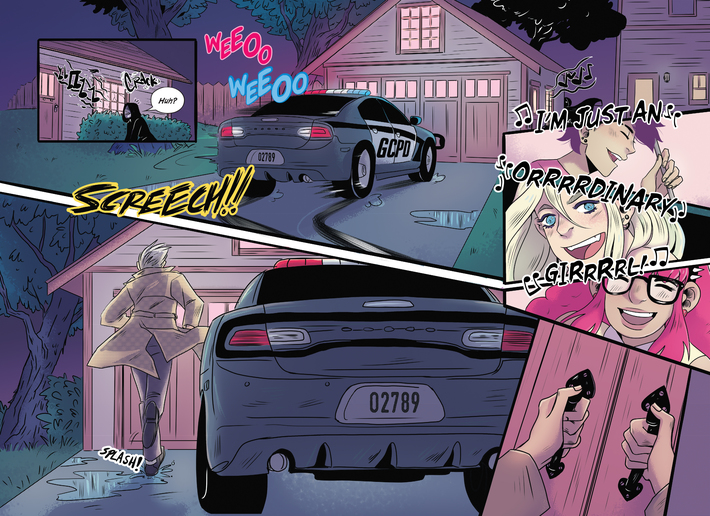 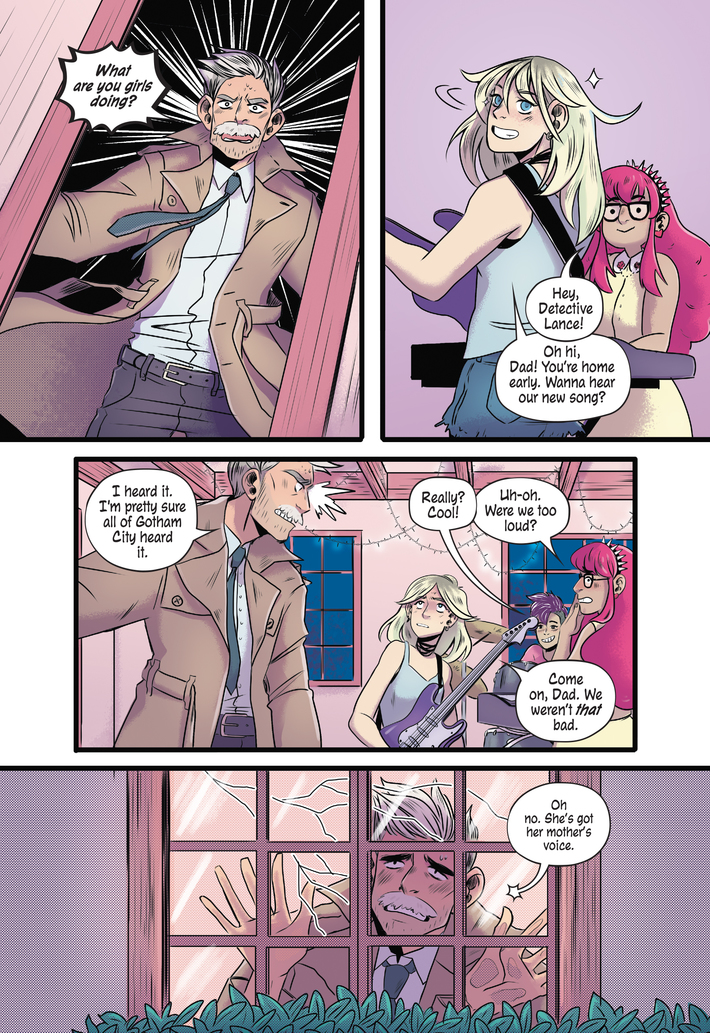 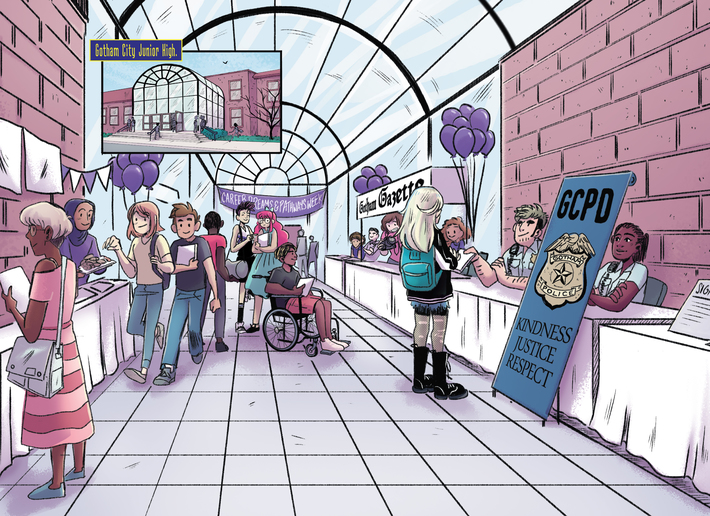 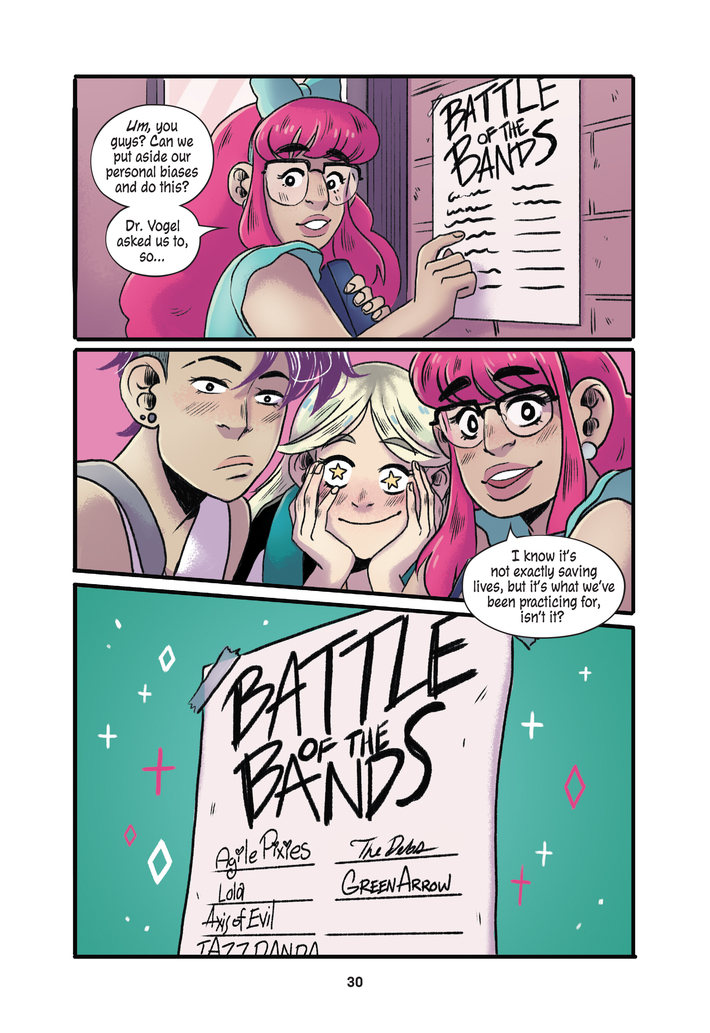