Feb. 25, 2021 — Graphic novels have become an essential part of our entertainment consumption, especially in the kids and young adult categories. In addition to be entertainment, though, they can also be important. Here are some that achieve that distinction: I’ve often wondered if there was any sort of German resistance to the Nazis during World War II — and this graphic novel gives me the answer.

Freiheit — it means “freedom” in German — is the true story of the White Rose, an underground sect of five Germans during World War II who printed and distributed leaflets excoriating Adolf Hitler’s regime, exposing Nazi atrocities and urging other Germans to resist.

And it was effective enough to really tick off the Gestapo, who made finding the White Rose a priority. Later in the war, the English thought enough of the White Rose leaflets to drop them by the ton on Germany from airplanes.

Our heroes were young (21-25 years old), college-educated pacifists who eschewed violence. The boys (only one White Rose member was female) all wore sweaters and tweed coats, smoked pipes and read poetry. They liked to discuss philosophy. You know, the kind of young, intellectual elites that one only sees in period movies.

But their depiction is terrific verisimilitude, and one is drawn into the White Rose’s scary, proscribed world pretty quickly. Andrea Grosso Ciponte’s moody, wash art carries the subtle emotions of the story, which would otherwise be hard to pick up from the high-minded dialogue.

But one emotion isn’t subtle at all. And that’s fear.

The art also carries the reader through the occasional German word or phrase, so don’t worry about translation. Further, all the leaflets are printed at the back of the book in English.

Get this book. It can be depressing, yes. But it’s also inspiring to see what some people will sacrifice for freedom. Needless to say, it has resonance with the world today. 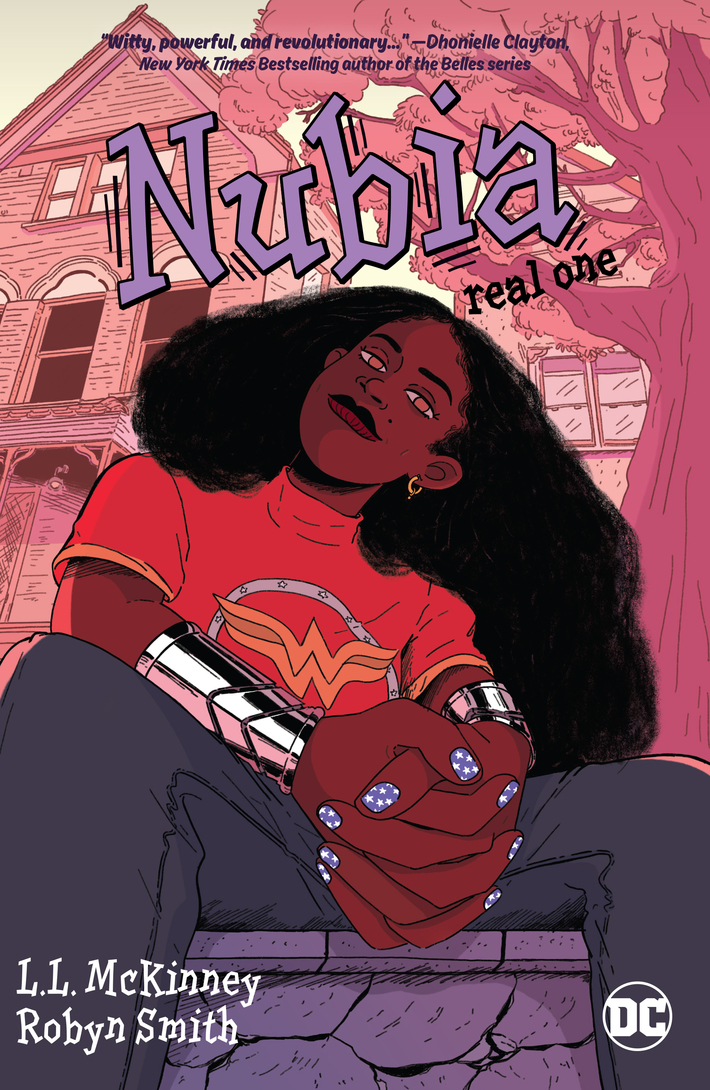 This new version of the Black Wonder Woman is a teenager, who hides her super-powers as she navigates high school. (Cover art by Robyn Smith, copyright DC Comics)

When the Black Wonder Woman, “Nubia of the Floating Isle,” was introduced in 1973, your humble narrator immediately pronounced her superfluous. After all, she was identical (except for being Black) to the one we already had.

Her existence was also annoying, in that it re-wrote comics history. Heresy!

Nubia’s origin, as we learned in 1973, was that she was sculpted from clay by Queen Hippolyta at the same time as baby Diana, only with darker clay. But after being given the same divine gifts as Wonder Woman and coming to life, she was kidnapped by Mars and raised on the “Floating Isle.”

Somehow, in all the stories since Wonder Woman’s first appearance in 1941, Hippolyta had failed to mention that Diana had a twin out there somewhere, being trained to hate her by the God of War. Mighty forgetful of you, your highness.

But never mind, since the Crisis on Infinite Earths (1985-1986) erased that version of Nubia and all the clay nonsense anyway. (Wonder Woman’s origin now is that she’s always been the daughter of Hippolyta and Zeus, and the whole Galatea business was just a smokescreen to fool the jealous and vindictive Hera.)  The few times the character has appeared since the ‘80s, she’s been significantly younger than Wonder Woman, and has an entirely different origin. Now you’re talking!

Especially since, in today’s world, almost any iteration of Nubia is virtually a necessity. Comic books have told us for 80 years what it’s like to grow up super-powered and white. “Nubia” shows us super-powers on the other side of the color divide — and it ain’t pretty.

This Nubia is a teenager who has to hide her powers, because she and her two Moms (one’s an Amazon) have a pretty good idea what would happen to her if she was “outed” as a powered person of color. “Cops don’t see Black kids as kids,” warns one of them.

But this story, by young adult author L.L. McKinney, is no downer. Yes, Nubia has challenges, especially because of the color of her skin. But this coming-of-age tale depicts her learning to meet those challenges with wit and heart. The importance of love — her friends; her parents; her first, fumbling romance — is paramount, as it rightly should be in a Wonder Woman story.

I was less enamored of Robyn Smith’s cartoonish art style at first, but by the end of the book decided it actually enhanced the story. The cartoony style removed some sense of threat, which otherwise might be overwhelming. And it’s certainly the right milieu for these young teens as they begin the trek to adulthood. Tamba: The human reality of child soldiers is brought to life in Tamba through a child’s eyes. (Cover art by Yann Degruel, copyright NBM)

This book came out last year, but I’ve had a hard time fitting it into any review column. It just didn’t ever jibe with the other books I was reviewing, because no matter how harsh, terrifying or violent those other books may be, they usually offer some ray of hope.

I’m not sure that can be said of Tamba. I was so horrified by this book that it took me weeks to finish it.

That being said, everyone should read it.

The premise is a kid named Tamba testifying to an investigation committee in a central African nation about his experience as a child soldier. Kidnapped at 8, brainwashed into believing in whatever cause the ruthless and violent rebel band believed, Tamba engaged in crimes against humanity that no one should commit, and no one should witness. That a child is at the center of it is, as Henry James might put it, the turn of the screw.

Worse yet, survivors of the rebel band’s atrocities are present as well. Tamba must face them and his own conscience as he re-lives his own crimes by reciting them to the commission (and to us).

Tamba is harrowing, because while our narrator is fictional, his experience is mirrored all over Africa. It has become commonplace for armed thugs to kidnap children, shape their malleable minds to their cause and set them loose on innocent civilians. It is a horror, and a real one.

Which is why we should all read “Tamba.” Through our tears, if need be.