LMD lunacy: The strange history of those S.H.I.E.L.D. androiac 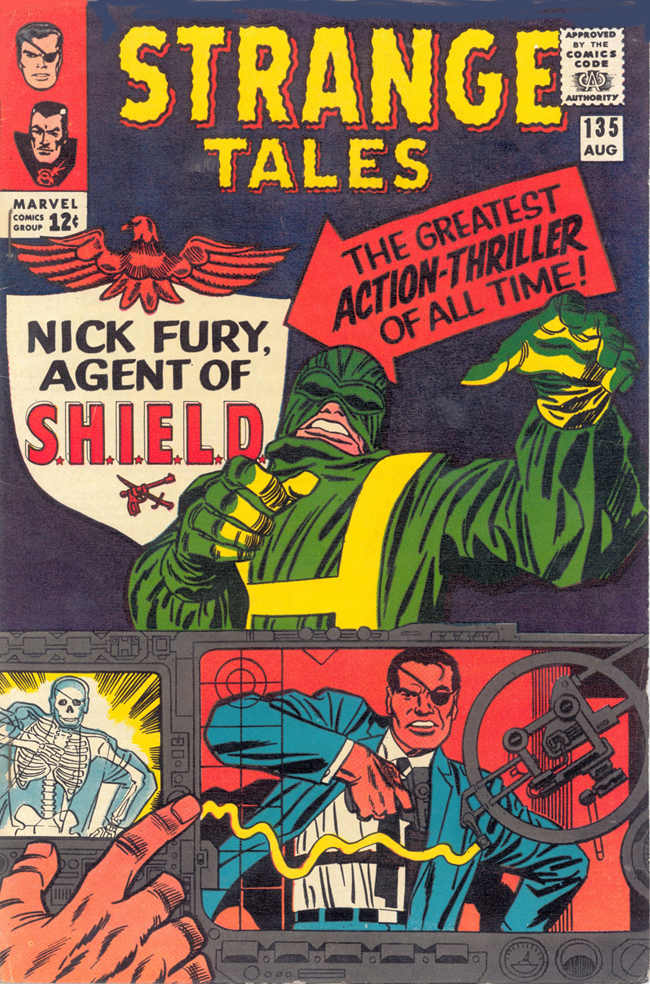 Strange Tales #135 (1965) featured the debut of S.H.I.E.L.D., the promotion of Nick Fury to Director  – and the first appeareance of Life Model Decoys. Copyright Marvel Entertainment Inc.

What are LMDs and why are they doing terrible things to Marvel’s heroes?

As seen in the Jan. 10 mid-season premiere of Agents of S.H.I.E.L.D., an android with artificial intelligence named Aida has become self-aware. She has replaced Agent May with another A.I. android, called in Marvel Comics parlance an LMD (“Life Model Decoy”). Hi-jinks are ensuing.

Life Model Decoys, as all loyal Marvel fans know, are super-sophisticated androids that can duplicate a human being right down to his or her fingerprints and retinal scans. They’ve been part of S.H.I.E.L.D. lore going back to organization’s first story in 1965, “The Man for the Job!” Life Model Decoys first showed up in the very first S.H.I.E.L.D. story in Strange Tales #135 (1965), where they were used to decoy assassins off the trail of Nick Fury. Copyright Marvel Entertainment

Inc.That “Man” was Nick Fury, who was at the time a World War II vet, a colonel in the CIA and, uh, a white guy. (Sorry, Samuel L. Jackson!) But he already had the eye-patch, and as he took over as director of S.H.I.E.L.D. he watched with his one good peeper as no less than four Nick Fury LMDs got assassinated by Hydra. That’s why they call ‘em “decoys,” folks!

So right from the get-go, S.H.I.E.L.D. had life-like robots who could, in secret, replace human beings and fool friends and foes alike. What could possibly go wrong?

Let’s start with Nick Fury vs. S.H.I.E.L.D., a 1988 story that bears the most resemblance to what’s happening on TV. Nazi scientist Arnim Zola created an LMD called “The Deltite” with the mind of Baron Wolfgang von Strucker (yes, Zola and Strucker have both appeared in the Marvel Cinematic Universe). Zola had Nick’s estranged brother Jake Fury smuggle it on board a helicarrier for some future evil purpose. The LMD became self-aware, though, and – not realizing it was really Strucker – started replacing everyone in S.H.I.E.L.D., Hydra and A.I.M. with LMDs.

Fury and friends eventually caught on and defeated The Deltite, but not before he’d killed and replaced half of the S.H.I.E.L.D. supporting characters and created a religion founded on Fury himself. Don’t worry, Marvel almost immediately realized its error, ignored the story, and put all the “dead” S.H.I.E.L.D. agents back in the field right away.

Although, come to think of it, most of them have died since anyway. Hmm. At least Aida is leaving most of her victims alive. (Sorry, Agent Nathanson!)

Oh, hey, did I mention Jake Fury? Funny story there.

In the late 1960s, S.H.I.E.L.D. had two run-ins with a mysterious masked villain named Scorpio, who had a tendency to dress up like Nick Fury, and (maybe) die at the end of each adventure. Turns out in a third meeting that – oh, no, Scorpio was Nick’s brother Jake! Who died! But they didn’t find a body! Again! So maybe not! 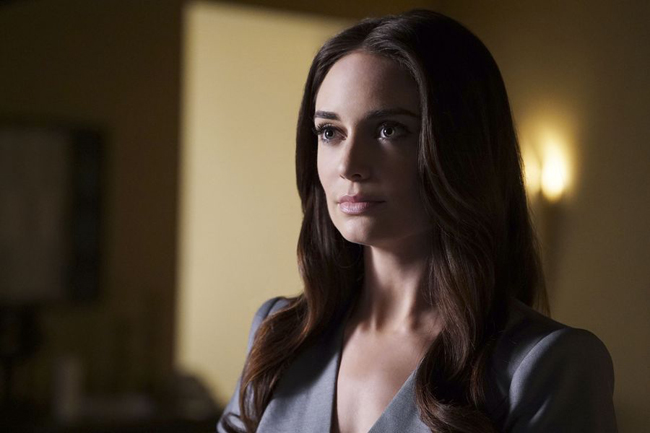 Mallory Jansen plays Aida, a Life Model Decoy in search of the dangerous Darkhold, which allowed her to change her own programming, on Marvel’s Agents of S.H.I.E.L.D. Credit: ABC/Eric McCandless

Two years later, another Scorpio appeared, allied with 11 other villains all named for signs of the Zodiac. They attacked the Avengers, instead of, say, some place with money, which is a pretty dumb plan. And sure enough, Earth’s Mightiest Heroes whupped the dirty dozen, and unmasked Scorpio as – awp! – Nick Fury! Who explained that he had faked Jake’s death with an LMD, then took his place as the substitute Scorpio and attacked the Avengers because, ah, it seemed like a good idea at the time. Or something. Espionage is so tricky!

But wait, does that mean that the Jakes who maybe died once or thrice before weren’t Jake at all, but were all LMDs?

Well, maybe. When Scorpio turned up yet again (in 1977), it could have been the real Jake, or maybe it was an LMD that thought it was Jake. Or maybe the Jake who maybe died (and maybe didn’t) was the LMD, and THIS was the real Jake. Um, maybe.

Regardless, this go-round Scorpio created another Zodiac, all made of LMDs. Hmmm. Really, “Jake?” That plan went belly up like all the others, and Jake killed himself in despair. And it must have been the real Jake, because Nick Fury showed up, examined the body, and said so. And spies never lie, do they? The end.

Ha ha! Of course that wasn’t the end. But it was for a long three decades.

Because it wasn’t until 2008 that Nick Fury revealed to Baron Strucker that the Jake Fury LMD was the first LMD ever, and it was that LMD that kept getting knocked off back in the ‘60s and ‘70s, which is something robots can do a lot of. Whereas the real Jake had been infiltrating Hydra all along, disguised as a villain named Kraken, and was now Baron Strucker’s boss. How’s that for robot finger in your eye, Wolfgang?

And that’s just two of the stories associated with LMD lunacy. There’s also: 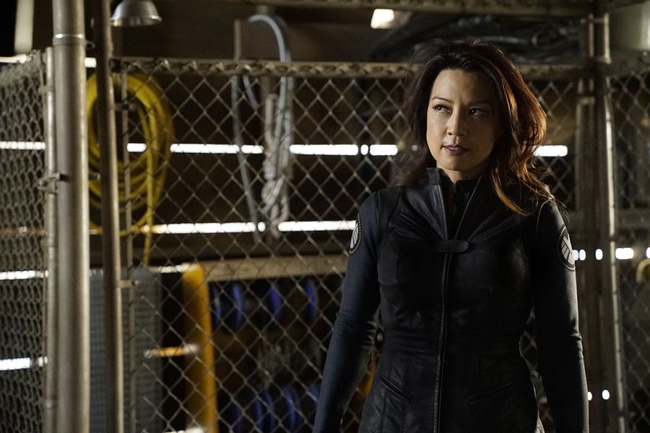 Ming-Na Wen plays both Agent Melinda May and now the LMD impersonating her on Marvel’s Agents of S.H.I.E.L.D. Credit: ABC/Jennifer Clasen

* That time in 1977 when the Jake Fury LMD re-programmed a Nick Fury LMD to think he was the real one, before he eventually learned he wasn’t, and started calling himself Max Fury. (FYI, that was 30 years before Mad Max: Fury Road.)

* That time in 2007 when She-Hulk had to fight a whole helicarrier full of Nick Fury LMDs dressed only in her (purple) bra and panties. (I don’t really remember why, but I suspect the real reason is that artist Rick Burchett wanted to draw a whole issue with She-Hulk in her lavender lingerie.)

* That time in 2009 when a whole bunch of LMDs dressed like Deadpool tried to kill Deadpool. (Wait! That’s not a bad idea!)

* That time in 2014 when former World War II commando and S.H.I.E.L.D. deputy director Timothy Aloysius “Dum Dum” Dugan found out he was actually an LMD, with the original having died in 1966. (Sorry, Dum Dum!)

* That time in 1976 when Tony Stark created a Thor LMD, which he re-used against his own friends in the comic book “Civil War” in 2006. (Does that guy never learn from his mistakes?)

It’s a shame that nobody took Agent Alphonso MacKenzie’s advice in Agents of S.H.I.E.L.D. Tuesday, where he warned that you should never build robots, because they always rise up against you. Sorry, Mack!

Jim Steranko has said Scorpio being Jake Fury is a lie.

Maybe they should start programming the LMDs with Asimov's Three Laws of Robotics.

Something about that cover always bothered me. Eventually I just put it down to some smart Stark / SHEILD tech. IE a gun and holster invisible to x-ray!

I never noticed the missing gun. Nor that the scan shows the elastic of his eyepatch!

Fury tucks his tie under the belt of his holster.

The guy watching the screen is working. Presumably the Hydra agent the other side of the console is goofing around, trying to make him laugh. It doesn't look like he's imitating Fury. He must be doing his impression of the Supreme Hydra.