'The mightiest champions of right and justice in the world!': DC's JSA returns

Sept. 3, 2019 -- A few weeks back, DC Comics promised to bring a long-abandoned, fan-favorite super-team back to its pages, and sure enough, the Legion of Super-Heroes reappeared in all its old (and updated) glory on Aug. 28.

And they’ve done it again. On the same week that the Legion returned, DC re-introduced another long-abandoned, fan-favorite super-team. It’s the Justice Society of America, and it’s even older than the Legion – it is, in fact, the very foundation of DC’s superhero universe.

It was a pretty big deal when DC brought back the Legion. The LSH was created way back in 1958, a teenage super-team from 1,000 years in the future that was inspired by the career of the teenage Superboy. The Legion took over Adventure Comics (which had been starring Superboy) in the 1960s, and remained in continual publication, more or less, ever since. Well, until 2013, when the latest iteration of Legion of Super-Heroes was canceled in favor of another future-set (and short-lived) series, Justice League 3000.

So their return is a pretty big deal. But the Justice Society is an even bigger deal.

As most folks know, Superman came along in 1938 and kicked off the superhero craze in comics. But, while Timely’s Human Torch battled Sub-Mariner in a memorable 1940 crossover, superheroes teaming up wasn’t yet a thing. The bajillion caped crusaders in the early days of comics all flew, swung and teleported solo.

The Justice Society changed all that. This re-creation of the art from All-Star Comics #3 shows the original JSA lineup, including (clockwise from left) Atom, Sandman, The Spectre, Flash, Hawkman, Doctor Fate, Green Lantern and Hourman.

The seeds were planted in the first issue of All-Star Comics, an anthology launched by All-American comics, part of what would become DC Comics. Really big superheroes had multiple places to call home – Superman, for example, starred in the book bearing his name, plus Action Comics and World’s Finest Comics. With All-Star, second- or third-tier heroes like Hourman (who only appeared in Adventure Comics) and The Atom (who only appeared in All-American Comics) received additional exposure, in the hopes they would become more popular.

For the first two issues, the various stars of All-Star appeared in separate, unconnected stories. But with the third issue, the then-unthinkable happened: They all teamed up. Yes, All-Star Comics #3 (Winter, 1940) told the tale of eight superheroes joining together as the very first super-team, the Justice Society of America. Generally speaking, the characters still acted solo in individual chapters in most of All-Star’s run, but the framing sequence at front and back usually showed them all together. And they were all acting on a single mission, in a single inter-connected story.

“Gathered in the Justice Society club rooms for their first meeting are the mightiest champions of right and justice in the world!” thundered the narrator on the first page. “Roll Call: The Flash, The Spectre, Doctor Fate, The Hawkman, The Sandman, The Hourman, The Green Lantern, The Atom”!

Heads. Exploded. And, as they say in comics, nothing was ever the same again.

The JSA is the Ur super-team, the one that inspired all the rest. Especially today’s Justice League of America, who stole not only the idea, but practically the name, in 1960.

Which is OK – both the JSA and JLA are owned by DC Comics. And many of the superheroes who populated the Justice Society were the antecedents for today’s major Leaguers, including Atom, Batman, Flash, Hawkman, Green Lantern, Starman, Superman and Wonder Woman.

The reason new versions of JSA characters were needed is that the originals had been canceled. Superheroes went out of fashion for a time after World War II, and the late ‘40s saw the last solo adventures of most superheroes, including the original Atom, Flash, Green Lantern, Hawkman and Starman. The Justice Society itself hung on until 1951, when All-Star Comics unceremoniously became All-Star Western. That was the toll of doom for the first age of heroes.

When the wheel turned and superheroes began gaining popularity again, DC decided to mine its past for inspiration – but without reviving those early characters. Instead, an entirely new character calling himself The Flash appeared in 1956. A new Green Lantern, with a science fiction origin instead of a magical one, showed up in 1959. The names Atom and Hawkman were recycled for new characters in 1961. Aquaman, Batman, Green Arrow, Superman and Wonder Woman had remained in continuous publication since the 1940s, but DC updated them, usually with new origins, giving rise to what amounted to second versions of the veterans. Those characters, and one entirely new one (Martian Manhunter, created 1955), populated the first few years of Justice League of America stories. 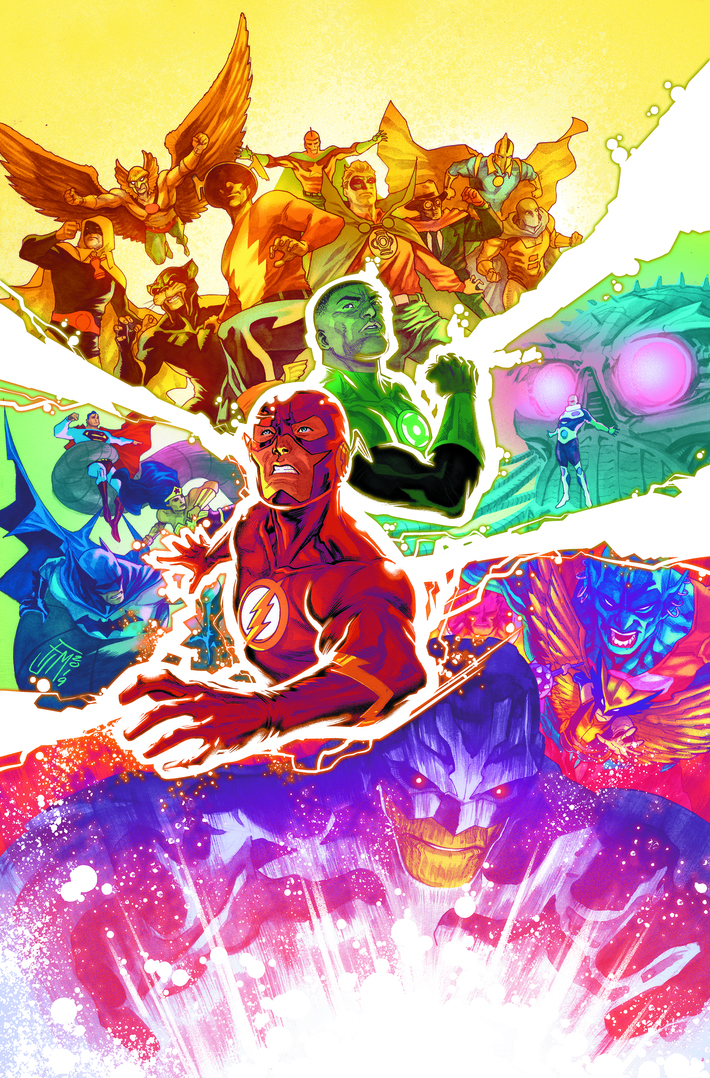 But the fans of the originals were hardly gone – they were barely into adulthood. When the new Flash and Green Lantern showed up in the late ‘50s, the original fanboys and fangirls began asking DC what happened to the JSA. That inspired Justice League of America editor Julius Schwarz and chief writer Gardner Fox to blow the whole super-team concept over the top. They posited that the original Justice Society’s adventures were canon – except they all took place on Earth-Two, a parallel Earth that vibrated at a different frequency. The new folks were all on Earth-One … and in 1963, the two teams met in Justice League of America #21-22.

But, as always, the wheel turns. The annual team-up ended with Crisis on Infinite Earths in 1985-86 (which is being adapted by The CW’s Arrowverse TV shows later this year). The JSA stalled after a few attempted revivals, and a 2011 revamp that petered out. In 2016, they were more or less written out of DC history by a line-wide reboot called Rebirth.

But the wheel has turned again! Or, at least DC hopes so, because in the latest issues of Justice League, the modern Flash (Barry Allen) and Green Lantern (John Stewart) go back in time on a mission and meet … yep, the Justice Society.

Whether you’re a new fan or old, this is beyond exciting. And that thrill readers got when the 1960s Flash and Green Lantern first met their JSA counterparts way back when? Yep, it’s back, and undiminished by time.

The original Flash (Jay Garrick) and Green Lantern (Alan Scott) seem bemused by these new kids with their names. “Son, I think you’re confused,” says Garrick, with the avuncular attitude – and happy grin – that made him so popular originally. “I’m the Flash, and he’s (indicating Scott) the Green Lantern.” 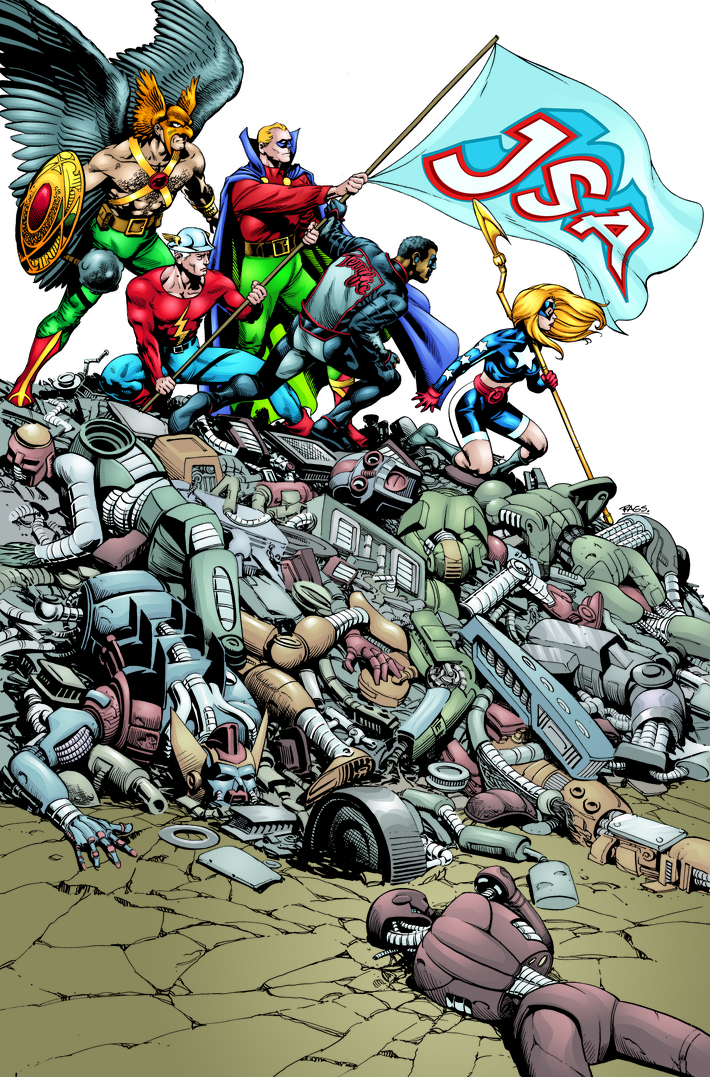 One of the modern incarnations of the JSA included (from left) Hawkman, Flash, Green Lantern, Mr. Terrific and Stargirl.

But these guys ain’t heroes for nuttin’. This Justice Society – Atom, Doctor Fate, Flash, Green Lantern, Hawkman, Hourman, Sandman, Starman and Wildcat – quickly figure out that if the new kids from the future don’t remember them, then the timeline has been changed to erase them from history. (And it has, in an entirely different book, Doomsday Clock, where the timeline-changer-in-chief is none other than Dr. Manhattan of Watchmen fame.)

The modern Flash says what we’ve all been waiting for: “Then I think it’s time for what I think has to be the first Justice League/Justice Society team-up!”

But no, that’s ancient comic book history, the preserve of older fans who still remember the chills down the spine they got from “Crisis on Earth-One!” – and have bragged about “being there” ever since. This new story – dare I call it a Crisis? – is the dawn of a new day, which fans both old and new can enjoy.

But especially the new. Finally, today’s readers can brag about “being there” at the beginning of something great. Something historic. Something that’s going to take place on Dec. 7, 1941, on an island named Hawai’i.

Everybody grab a copy of the latest Justice League and take a seat. I predict heads will explode.