Where did 'Endgame' come from, anyway? Captain Comics picks the Best of Thanos

If you’re inspired by the Avengers movies to read more about Thanos, you’ve probably found a bewildering array of hardbacks, trade paperbacks, comics and miniseries, whose online or back-cover descriptions don’t indicate what’s good, what’s bad and what’s mind-numbingly redundant. Fear not! Captain Comics comes to the rescue, with a host of recommendations of various Thanos collections: 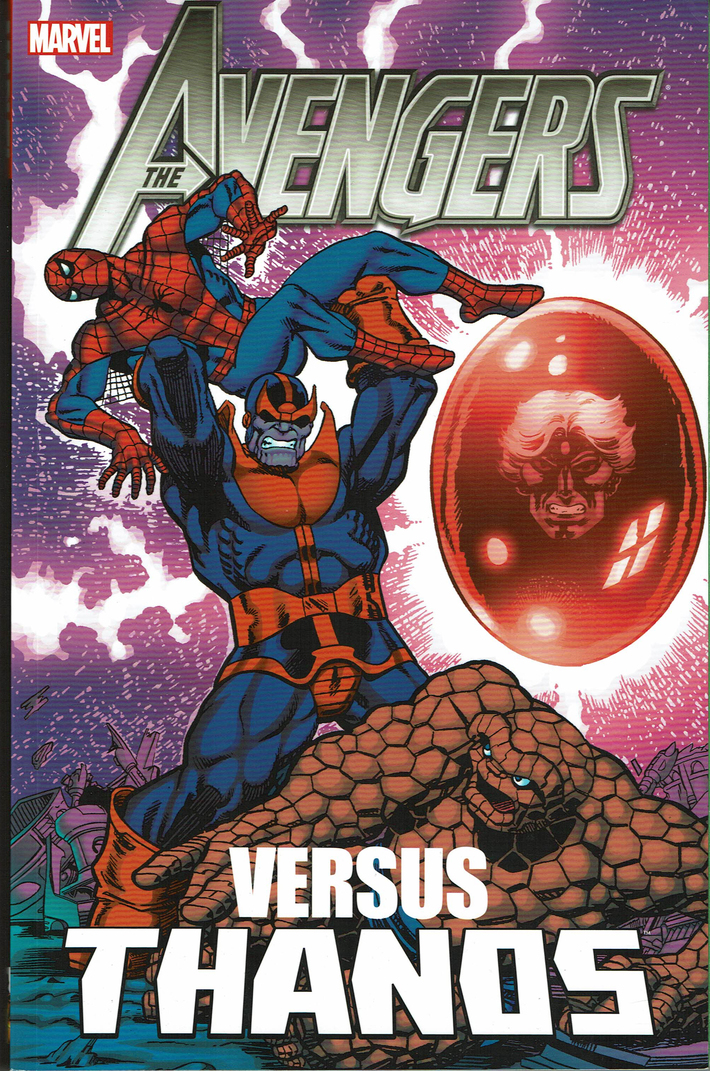 Avengers vs. Thanos collects the first two Thanos stories, which introduce the themes and tone that would inflect most Thanos stories in the years to come.

The very first Thanos story, collected here, meandered though Avengers, Daredevil, Iron Man and Marvel Feature in 1973-74 before climaxing in the pages of “Captain Marvel”. It served as the blueprint for Thanos stories for literally years.

Plot: The mysterious and ruthless Thanos is introduced as being in search of the Cosmic Cube, a device created by A.I. M. that can turn wishes into reality. The Red Skull had used it (ineffectually) a couple of times, but Thanos has bigger plans: He intends to become God. Needless to say, Captain Marvel and the Avengers take issue with this plan.

Some aspects of this story will seem odd to modern readers, like how B-list Iron Man was, and how male Captain Marvel was. Things have changed! But as an introduction to Thanos and his wackadoodle ambitions, the Cosmic Cube story is indispensible reading for any fan of Ol’ Purple-Puss.

Also included in this collection is the second Thanos story, which appeared in 1976-77 in Warlock, Avengers Annual, Marvel Two-In-One Annual and, weirdly, Logan’s Run. It’s essentially the Cosmic Cube story all over again, but much bigger and more ambitious.

And it includes Adam Warlock, a character yet to appear in the movies, but who is vitally important to the Thanos saga in the comics. Warlock is a golden-skinned character with vague cosmic powers who, when killed, retreats into a cocoon, only to revive with a new costume and a new set of vague cosmic powers. He is sort of Thanos’ opposite number, a character who appears in most Thanos tales and routinely thwarts the Mad Titan’s plans. Plus, he has the Soul Stone (called a “Gem” in the comics) smack dab in the middle of his forehead.

In addition to the usual mix of Avengers, Spider-Man and Thing of the Fantastic Four also appear, with the former having a couple of standout scenes. (One is a panic attack. Seriously, it makes sense.) Infinity Gauntlet, the Thanos story on which the movies Infinity War and Endgame are based, is available in a lot of formats, including this hardcover.

This is the big one, the 1990-91 miniseries adapted in Avengers: Infinity War, where Thanos gets all the Infinity Gems and wipes out half the universe with a snap of his fingers. Once again there’s a feeling of déjà vu – this is Thanos’ third bid for godlike power – but the scale is even larger and the fate of the Avengers is shocking (until the inevitable third-act reversal, of course).

This series gives Thanos a different reason to wipe out half of all life than the movie – to impress his girlfriend, the personification of Death – and includes Mephisto, Marvel’s Satan stand-in, who adds sardonic wit and treachery to the mix. Also: Adam Warlock, Silver Surfer and the cosmic entities of the Marvel Universe do big, cosmic things.

The Thunder God battles Thanos, who has teamed up with another unbelievably powerful baddie, the Mangog. There is much smiting.

‘THANOS VS. THE HULK’

Includes Blastaar and Annihilus from the Negative Zone. Seriously, this one is nothing but smiting. But you kinda want it, don’t you?

In this 2002 story, Atleza, the Anchor of our Reality, who, due to a snafu in the timeline in “Avengers Forever,” has arrived too late to be trained by her predecessor, and must be protected and educated by Adam Warlock and Gamora, albeit the former has been driven insane by the knowledge necessary to train a Reality Anchor, and the latter is an assassin ill-suited to babysitting, while elsewhere, Thanos has been split into five doppelgangers, each representing one aspect of his personality, all of which have reverted to the nihilism of his early days, and are searching for Atleza to use her power to kill half the universe again.

How can you not want to read this story? Rating: Five Gems. 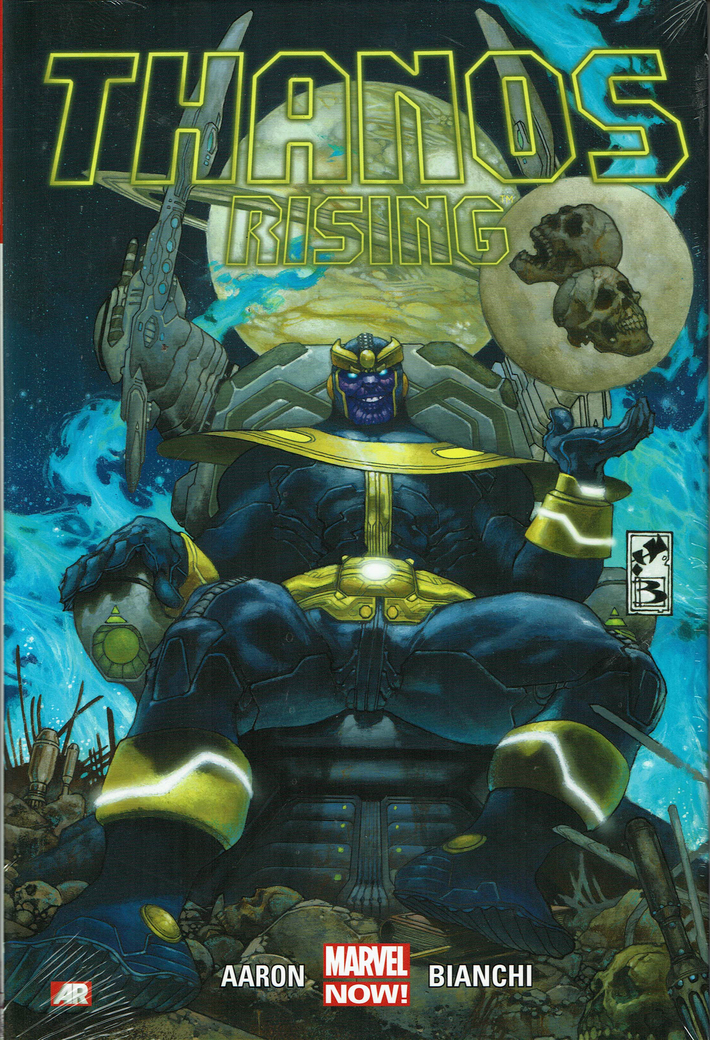 Thanos Rising tells the story of Thanos’ childhood, which involves a lot of things not found in most childhoods.

Even monsters have to start somewhere, and this collected miniseries gives us Thanos’ birth, childhood and early schooling. What happens? Hint: Things don’t go so well for the Mad Titan’s parents and schoolmates.

What happens if Thanos wins? We find out when a future Thanos sends the Cosmic Ghost Rider (formerly Frank Castle) to kidnap the present-day Thanos back to the apocalyptic future where older Thanos has killed almost everyone – and is ready to join his victims (with Death), at the hands of his younger self. But present-day Thanos calls shenanigans and the Thanos vs. Thanos cage match begins.

Also: We learn Thanos’ birth name! No, I won’t say it here. He might be listening.

But wait! “Thanos Wins” isn’t the first time we’ve seen Thanos do that voodoo he do so well. In 2010, Marvel was in some sort of self-loathing spiral, and in a cry for help published a bunch of stories that depicted possible demises for its main characters. And in one spasm of nihilism, the publisher wiped out everything in the six-issue series “Marvel Universe: The End.”

But, weirdly, this one series was actually “in continuity,” as we comic fans say, meaning it “counts.” And guess who wiped out the universe – and then brought it back?

Yeah, that purple guy again. But it wasn’t just an exercise in pessimism; the series actually had a point. There comes a time when Thanos is sitting in a white void, having, you know, destroyed everything, as he does. And in that void, he is joined by, um, let’s say a friend – who teaches Thanos the surprising reason for his existence.

Yeah, I thought that would get your attention. Five Gems.