So just who is this Mysterio guy in Spider-Man: Far From Home? Let’s go the Sacred Texts of the Nerd Canon to find out!

Mysterio first appeared in Amazing Spider-Man in 1964, in the 13th issue. That proved to be anything but unlucky, as that was the launch of a long career for the master of illusions. 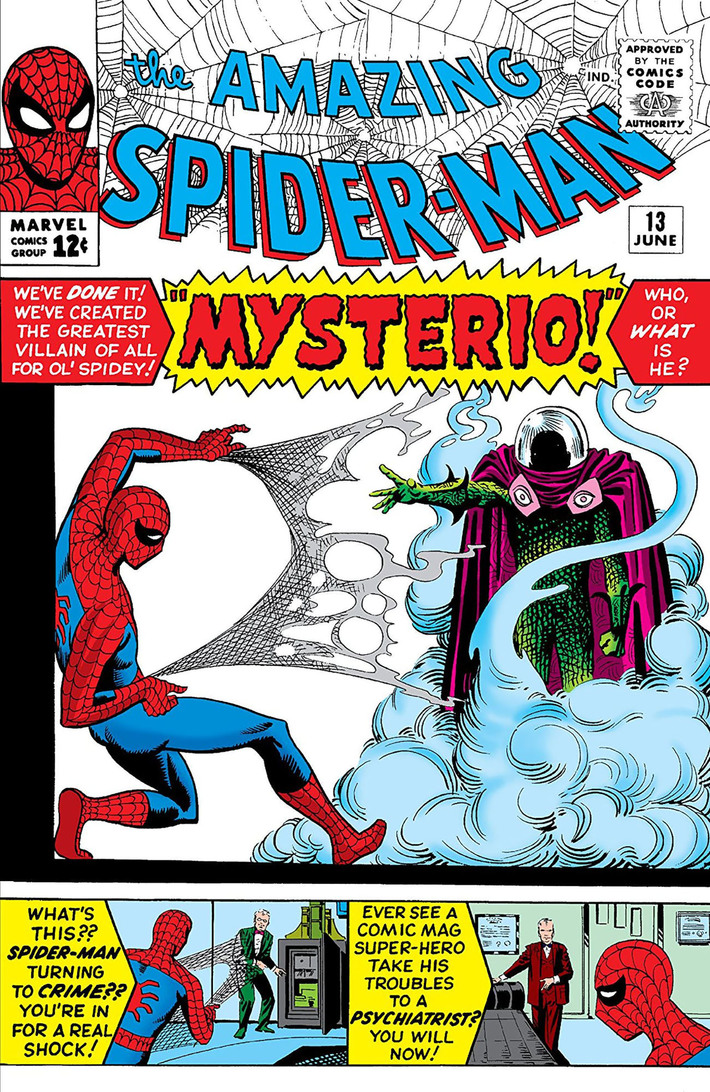 Mysterio’s first appearance, in 1964’s Amazing Spider-Man #13, was the beginning of a long career bedeviling the web-spinner.

The issue opened with Spider-Man committing crimes, which kept Peter Parker up at nights, since he knew he didn’t do them. Or did he? He’d only had his spider-powers for a year or so in comic book time, and what did he really know about them? Maybe a side effect was somnambulist bank robbing!

Naturally, Daily Bugle publisher J. Jonah Jameson was as happy as a pig in mud, printing lots of gleeful “I told you so" stories. Adding to this plot stew was the appearance in the Bugle offices of a fellow who claimed he could bring Spider-Man to justice. His name was right in the title: “The Menace of … Mysterio!”

And no finer example of Spider-artist/co-creator Steve Ditko’s wondrous weirdness could be found than Mysterio’s bonkers ensemble. He appeared to be wearing dark green, fishnet Spandex head to toe, with a huge purple cape that was attached by clasps that looked like giant eyes. His light green gloves and boots were adorned with arcane symbols and horns, and he was constantly obscured by a flowing mist. And, the topper, literally: He wore a translucent globe on his head, which only allowed the shadow of his face to be seen.

It was sublimely surreal. And bless Kevin Feige, because the costume has transitioned into the movies largely unchanged.

Back to Amazing Spider-Man #13: “I am Mysterio!” he announces to Jameson and crew, selling the heck out of that outfit with a dramatic entrance. “If you wish to end the menace of Spider-Man, follow the instructions in this envelope. … Remember, although Spider-Man has great powers, the power of Mysterio is even greater!”

Well! Thre are no flies on Jameson, who prints Mysterio’s challenge straightaway, leading to a fight between Mysterio and the wall-crawler atop the majestic Brookyn Bridge. Which Spider-Man loses! Mysterio seems to have a counter for every one of Spidey’s tricks, from acid that dissolves webbing to a spider-sense-jamming sonar. The ecstatic Jameson gives Mysterio still more positive publicity, and the man in the fishbowl hat even gets a parade thrown in his honor.

But there are no flies on Spider-Man, either, who figures out that Mysterio’s “powers” are just tricks, and secretly plants a “spider tracer” on that big, purple cape (yes, they had tracking devices in 1964). Ambushing Mysterio, Spider-Man defeats him and gets him to spill that he did, in fact, impersonate Spider-Man and framed him by committing crimes. Spidey caught it all on a tape recorder (yes, they had those, too, in 1964), and Mysterio is arrested.

Jameson has egg on his face. Spidey even shows up at his office to rub his nose in it, and web the irascible publisher to his own ceiling. I swear, JJJ may be the true star of those early issues. He was certainly the most interesting character!

Mysterio reappears for some more “firsts” in Stan Lee’s run as writer on Amazing Spider-Man, that are important in Spider-history. For example, he was part of the first Spider-Man supervillain team-up in the first Amazing Spider-Man Annual, the Sinister Six (Dr. Octopus, Electro, Kraven the Hunter, Mysterio, Sandman and The Vulture). He also managed to trick Spider-Man into thinking he was going crazy in 1965, and that he had been shrunk to six inches in 1968. These are significant not only as terrific early tales of the web-spinner, but because Mysterio would re-use these tricks in subsequent outings – and all good Spider-philes should know their origins! 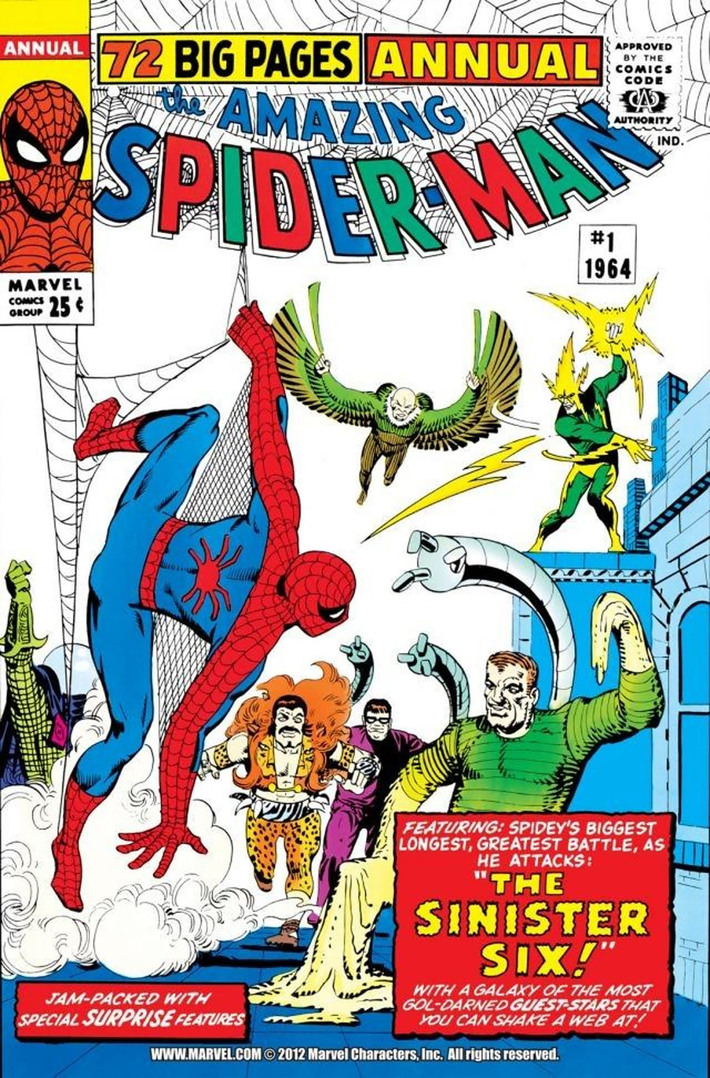 In only his second appearance, Mysterio teamed with five other Spider-villains and built three X-Men robots in Amazing Spider-Man Annual #1. That’s him on the far left.

And while some consider Mysterio a B-list villain – including, at one point, Mysterio himself – the facts would indicate otherwise. Sure, his “magic powers” are phony (he is a former Hollywood stunt man and special effects wizard). And yeah, Stan Lee didn’t even bother to give him a civilian name (later writers christened him Quentin Beck).

But consider the implications of his many attacks on Spider-Man, which imply vast knowledge and sophistication as a physical combatant, actor, mechanical engineer, inventor and hypnotist. He displays facility with chemistry (especially hallucinogens), dimensional physics, applied psychiatry and robotics. As later stories began to fill in the blanks on Quentin Beck, we learned that he is a Massachusetts Institute of Technology graduate, and therefore no dummy.

For example, when he discovers the parallel Earth that was the setting for Marvel’s Ultimate line of comics, Beck creates a Mysterio android and sends it, somehow, from “our” dimension (616) to that one (1610) in order to create a crime empire. The heroes of that world are unaware that their foe isn’t human for two years. 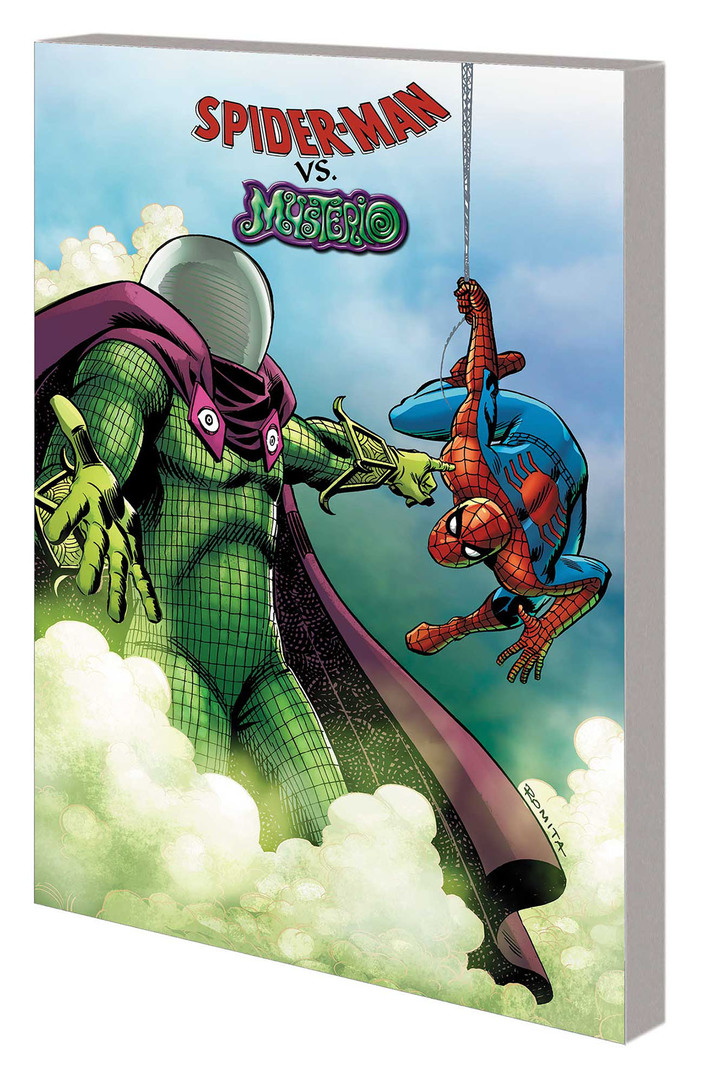 Art by John Romita Sr. (based on his own cover to Amazing Spider-Man #66). Copyright Marvel Comics.

A recent trade paperback, Spider-Man vs. Mysterio, collects some of the best stories featuring the master of illusions, including his debut and the time he convinced J. Jonah Jameson he’d gone to Hell.

In his first foray with the Sinister Six, he creates robots of three 1964 X-Men whose Cyclops is almost as powerful as the real thing. In a 1965 team-up with a supervillain named The Wizard, Beck creates a giant, fireproof ape robot that almost kills the Human Torch. In more recent years he creates a robot “daughter” who thinks she was the real thing – all of this before he dies the first time.

Oh, right, I forgot to mention that Mysterio’s been dead a few times. In fact, he is currently singing in the choir invisible. Don’t worry – this being comics, death never sticks. But this is one character whose deaths, no matter how convincing, could plausibly be fake. With Mysterio, you never know what’s real and what isn’t.

He is also shockingly ruthless. Some of his schemes are as appalling as they are clever.

For example, in 1979 he convinces Peter Parker that his Aunt May is dead. It’s all part of an elaborate scheme that’s not worth recounting, and honestly, the old biddy’s been on death’s door since, like, forever. But still, that’s just cold.

In Webspinners: Tales of Spider-Man #1-3 (1999), Beck convinces J. Jonah Jameson that the publisher is dead and in Hell. He uses an old movie studio to create the infernal environment, which includes Spider-Man imps who JJJ thought were going to torture him through eternity.

In 2009 his Ultimate Mysterio android murders Earth-1610’s Kingpin by throwing him through a window, in order to facilitate taking over the New York underworld. And when Beck finds out who that world’s Spider-Man is in his civilian identity, he sends a Spider-Slayer robot to his high school to kill him – not only coldly planning the murder of a teenager, but endangering hundreds of others.

In that 1998 story, Beck is diagnosed with lung cancer and a brain tumor, thanks to breathing in his own hallucinogens and Mysterio’s signature fog for so many years. Thinking himself a failure after so many beatings at the hands of Spider-Man, Beck decides to shuffle off the mortal coil with at least one big win – by driving a superhero crazy enough to kill him before he dies anyway.

This scheme may be Mysterio’s boldest, finest and most elaborate scheme. It is also the most cold-blooded.

The hero Mysterio chooses is Daredevil, because Beck had become depressed and thought a B-list villain like himself should be killed by what he considered a B-list superhero. The real reason, probably, is that Kevin Smith was writing Daredevil and not Amazing Spider-Man.

Anyway, Beck pays the Kingpin for Daredevil’s secret identity and learns the nature of his powers, and of his deeply ingrained Catholicism. Then, through the use of drugs and hypnosis, gradually convinces DD over time that a baby has been born via virgin birth – and is the Antichrist. The slowly-driven-mad Daredevil is being coerced into murdering a baby.

Well, that doesn’t happen. And Daredevil isn’t driven to kill Beck, either. (When his scheme fails, Beck shoots himself in the head. Maybe.) But Mysterio convinces DD’s girlfriend Karen Page that she has AIDS, and then has his hireling Bullseye kill her with one of Daredevil’s own billy clubs.

Yeah, that’s just downright evil. So maybe Mysterio is, by some standards, an also-ran. But his villainy is definitely top drawer.