With the recent release of The Unknown Anti-War Comics, Yoe Books publisher Craig Yoe has once again proven that comics can and do attempt every topic under the sun – and that he is going to bring them to us.

Unknown Anti-War Comics assembles a generous collection of comics that are, yes, anti-war – moreso than other vintage books with that reputation. And they are generally unknown because they were published by lowly Charlton Comics during the late’50s and early ‘60s – a full decade before the anti-Vietnam protests began screaming across headlines and TV screens.

How did such a book, which I didn’t know I needed until I read it, come to be? I asked Yoe himself, whose vast knowledge of comics and relentless work as a “comics archaeologist” isn’t the least bit exaggerated.

“The origin of the project was my own active involvement in the anti-war movement during Vietnam,” Yoe said in an interview. “I was a comics fan back then, too, and passing out leaflets I cobbled together, composed of powerful World War I-era anti-war political cartoons, to pass out on my college campus. About five years ago I stumbled across some decidedly anti-war stories in some obscure comic books and dug in and was amazed to find many more – enough for a book, anyway! Yeah, because they are comics they’re quite entertaining, but these unknown stories do have a powerful message against the atomic bomb, war, militarization, plus greed and prejudice, the root causes of war.”

Included in the book are the only two issues of Never Again (1955-56), an oddball, short-lived series whose intended audience is hard to imagine and whose existence is hard to explain. Never Again shows the futility and downside of war from the Battle of Crecy, to the pursuit of Chief Joseph, to the world wars and more. “Two Men in the Sky,” a story about aviators in World War I, will being a lump to even the most resistant of throats and is probably better written than almost anything in EC’s Aces High or DC’s Enemy Ace. 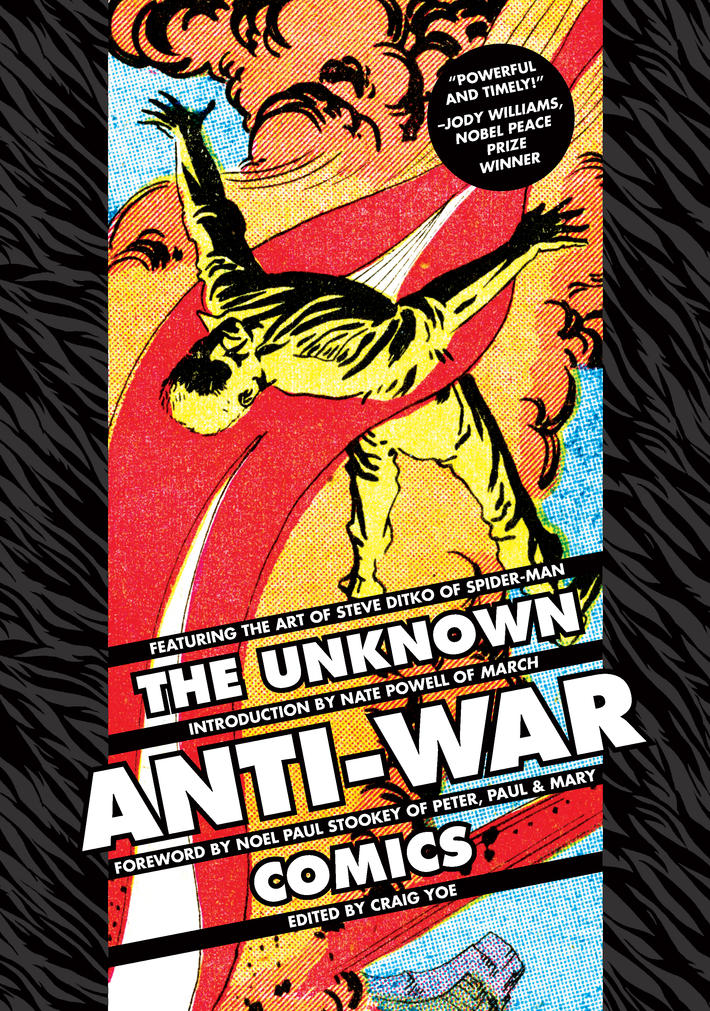 The cover to The Unknown Anti-War Comics, with a blurb by Nobel Peace Prize winner Jody Williams.

Other Charlton books get into the mix, especially science fiction, like Mysteries of Unexplored Worlds, Space Adventures,  Space War, Strange Suspense Stories and Unusual Tales. The bulk of the art is carried by journeymen Bob Forgione, Charles Nicholas and Bill Molno, but fan-favorites Ross Andru, Steve Ditko, Dick Giordano and Carmine Infantino also contribute. The final story, “Doomsday Machine,” is by the under-appreciated Pat Boyette, and may be the finest work of his career.

“The quality of art is always a prime consideration,” Yoe said of his selection process. “You have a comic book master, Steve Ditko, at the height of his powers, in his lushest period. And the other artists in this compendium produced strong journeyman fare.

“But then the series had to be on point,” he continued, “decidedly anti-war. And, yes, true and importantly to the comic book form, they had to be entertaining. Otherwise comics with a message, or an agenda, or a drum-beating point of view, can become dull, ham-fisted, and ultimately ineffective propaganda.”

Which could be said of some of Ditko’s later work, like the didactic Mr. A. But Unknown provides some shining examples of Ditko’s personal philosophy, long before Mr. A, or even Ditko’s plotting and artistry on his co-creations, Spider-Man and Dr. Strange. Is it possible he wrote these stories as well?

“I am not positive about the intricacies of Ditko’s philosophy,” Yoe said, “but I do start the book with a strong, previously unpublished anti-war statement that the great artist made in a  letter to a fan. I suspect many of these stories were written, un-credited, by Joe Gill, who was a veteran.”

Which raised a question.

“Did his experience turn him off to war/combat?” Yoe wondered. “Or was he understandably caught up in the fear of the Cold War and The Bomb that was pervasive in America in the mid-20th century, when these comics were produced? Or was the subject just fodder for a good entertaining tale? I couldn’t say for sure. But these [ital]are[end ital] stupendous stories, with terrific art and a solid anti-war point of view no matter how they came about or the exact feeling behind them.”

Which is what differentiates them from better-known anti-war stories, like those of Harvey Kurtzman for EC’s Two-Fisted Tales and Frontline Combat, or Warren’s Blazing Combat. Yoe explained: 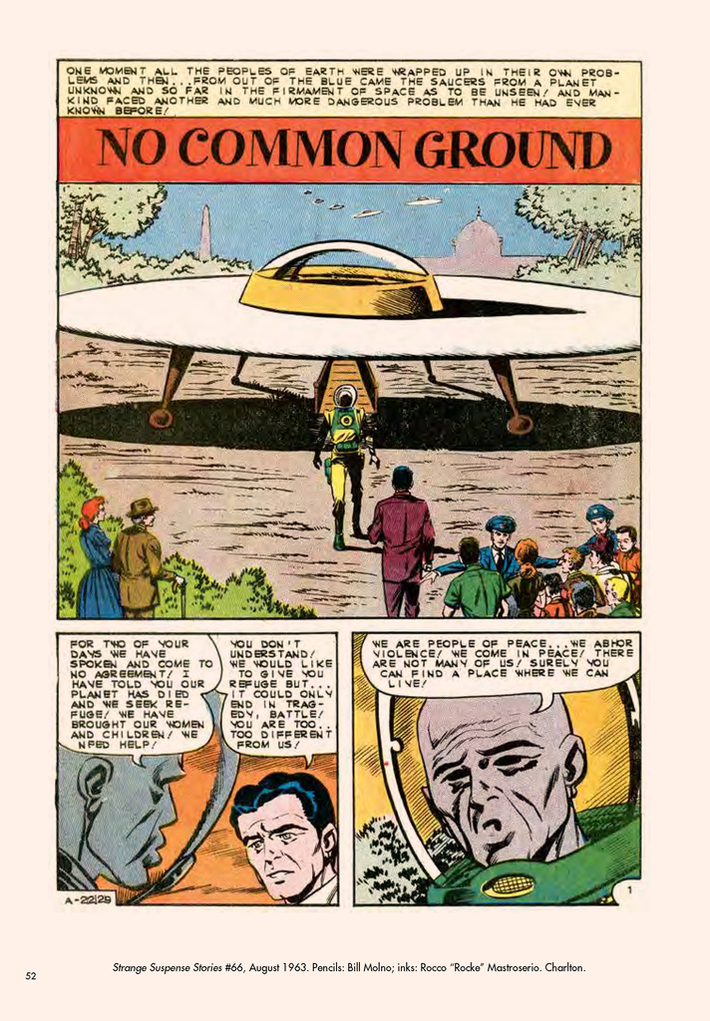 Page One of “No Common Ground,” a three-page story from Strange Suspense Stories #66 (1963), where the Earth government decides to build a wall around some alien refugees.

“As I said in the book, I don’t think Kurtzman’s EC comics and other similar comics were anti-war, as has been popularly thought. The EC comics show the grim horror of war and are free of military jingoism, but Kurtzman ultimately felt war could be justified. As someone who tries my best to be a pacifist I do not agree with that. I was not able to find [ital]any[end ital] other vintage comics besides the ones in ‘The Unknown Anti-War Comics’. If there are any they are, er … unknown to me.”

And later comics aren’t much help, as the war genre as a whole fell off a cliff, sales-wise, during the Vietnam War.

Marvel’s Sgt. Fury tried to compensate with socially relevant, one-topic stories like “The Deserter” and “The All-American”. Mostly by veteran Gary Friedrich, the downbeat “The” series eschewed elements that glorified war in favor of showing the cost – although calling them anti-war might be a stretch.

Over at DC Comics, books like G.I. Combat and Our Army at War began slapping a “Make War No More” blurb at the end of each story in place of “The End.” This effort was roundly criticized as hypocritical, for providing 20 or more pages that made war look exciting, mildly offset by one blurb reflecting the audience’s attitude.

“I believe the sales of war comics, like war toys, were going down during the late ‘60s and early ‘70s anti-war sentiment,” Yoe said. “So DC just hollowly pasted that Make War No More slug on the end of each rah-rah, gung-ho fighting men story. They were hoping that could help bolster their flagging sales somehow with this insincere nod to hippie peaceniks. DC was as laughably anti-war in their war comics with this artificial Make War No More symbol as they were embarrassingly ‘hip’ with their graphic cover trade dress, consisting of their self-congratulatory ‘go-go checks’! I do like Joe Kubert’s storytelling in those comics, though, and who can hate go-go checks? But let’s not be fooled!”

While war comics as a whole are rare these days, they do exist. But the most interesting trend comes in the form of graphic novels by journalists or veterans reporting the brutalizing effects of war on civilians and soldiers alike. Joe Sacco’s Palestine and Joe Kubert’s Fax from Sarajevo would make fine companions for The Unknown Anti-War Comics.

While those books are too current for Yoe’s time frame, he is four-square behind the effort.

“Bravo to the writers, the artists and the publishers,” he said. “I think there have been some moving anti-war graphic novels in the last 10 years, and am thrilled that those creators are making their voices heard in the small way we all can. There isn’t large galvanizing anti-war movement now like there was in the ‘60s, but God knows we need one!” 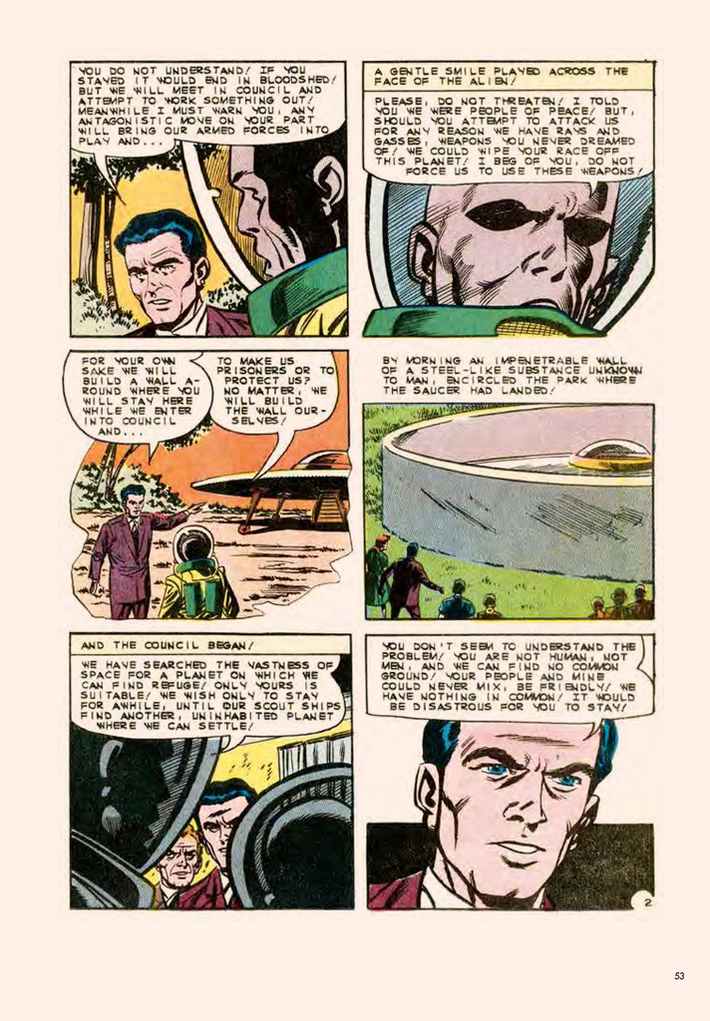 Page Two of “No Common Ground,” where the “We come in peace!” pleas of the aliens are ignored in favor of walling them off.

Obviously, despite  the stories in Unknown Anti-War Comics being more than a half century old, they still apply to today’s world. Sadly, war seems to be a constant these days.

There is even a story about refugees from outer space landing on Earth that may sound familiar to followers of today’s politics. “We seek refuge,” says a sad-faced alien in “No Common Ground.” “We have brought our women and children. We need help! … Surely you can find a place where we can live!”

The Earth government’s response? Build a wall around them! This story was written in 1963, and it seems some things never change.

It’s astounding how on point all of these stories are, even all these years later. “Why do we glorify violence and war and make peace seem the folly of fools?” asks Nobel Peace Prize winner Jody Williams in The Unknown Anti-War Comics.

It’s a question it seems we’ve been asking for a very long time.