Last week, I relived some of the famous failures in comic book history.  Now, it’s time to look at the other side of the coin.  Comic books wouldn’t have lasted for more than 70 years without a few successes.  Many of those successes are well documented such as Superman originating the superhero genre or Flash sparking the Silver Age.  I’m going to take a look at some of the more surprising impossible-to-predict successes.

Superheroes ruled the world in the early 1940s.  However, modeled on the comic strip supplements common in Sunday newspapers, comic books were also dominated by cross-genre anthologies.  It was normal for a superhero like Green Lantern to share space with an airplane humor strip like Hop Harrigan.  But one humorous back-up strip couldn’t be confined to the back pages.  Archie debuted in Pep Comics #22 when the title was the home of the superhero Shield.  In 1943, the Shield welcomed Archie to the cover.  They shared cover duties for 10 issues until Archie finally bumped the Shield off for good with issue #51.  Archie quickly grew into a teen humor empire.  There were spin-offs starring his supporting characters like Jughead, Betty and Veronica.  Eventually, Archie expanded to cartoons and popo music.  The company even renamed itself after its biggest star.  But it all started in a shrewd bit of counter-programming, as the teenage goofball beat out the star superhero. Marvel didn’t have high expectations when they re-launched the X-Men in 1975.  After helping to put the new team together and writing the introductory giant-size issue, Len Wein handed the writing chores over to Claremont.  He didn’t think it would be a bit hit and preferred to stay on the more established Incredible Hulk.  The schedule was also cautious.  After that first giant-size issue, the X-Men returned as a bi-monthly title.  But the team of international misfits and cast-offs struck a chord with fans.  Claremont’s ongoing plots drew them in and beautiful art by Dave Cockrum and John Byrne blew them away.  The X-Men became a huge hit.  They inspired a superhero renaissance.  They eventually led to an entire line of similar teams of mutants like X-Factor, Excalibur and X-Force.  DC followed suit a few years ago when Marv Wolfman and George Perez turned a similar trick with the New Teen Titans. 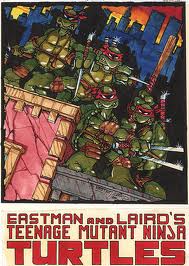 Heroes in a Half-Shell

Nobody could have predicted this.  Kevin Eastman and Peter Laird conceived of the Teenage Mutant Ninja Turtles in 1984.  They published the first copies of the comic via a mimeograph machine.  Yet somehow the comic found a cult audience.  It spread quickly among comic book fans.  The title was supposed to be a parody of popular superheroes like Daredevil but within two years, it had inspired parodies and knock-offs of its own.  Comic book stores saw a black-and-white boom with other titles like Adolescent Radioactive Black-Belt Hamsters and Pre-Teen Dirty Gene Kung Fu Kangaroos.  For comics, that led to a black and white glut.  But for the Turtles themselves, it led to bigger and better things.  The Turtles became the heart of a licensing empire, appearing in video games, cartoons, puzzles, lunch boxes and countless kids’ costumes.  By 1990, they were starring in their own movie.  They were like the garage band that has their demo tape turn into a platinum record.  Though they’re no longer a cultural phenomenon, the Turtles are going strong today with a new comic book series. It wasn’t the first time that Marvel had lent some of its characters out to another studio.  They made a big splash in 1996 when Jim Lee’s Wildstorm and Rob Liefeld’s Extreme took over on four of Marvel’s flagship titles.  However, the response to Heroes Reborn was mixed.  Reviews were unfavorable and Marvel made an even bigger splash when they brought their heroes back into the fold with Heroes Return.  So it was something of a surprise when Marvel tried it again in 1998.  But this time, they entrusted some of their second-tier characters to Event Comics.  Though they had a couple of interesting characters in Ash and Painkiller Jane, Event wasn’t as big as Wildstorm or Extreme.  But Event’s Joe Quesada and Jimmy Palmiotti had a strong editorial vision.  They returned the Marvel characters to the street, giving them more of an edge.  And they teamed with great writers: Kevin Smith on Daredevil, Christopher Priest on Black Panther and Paul Jenkins on Inhumans.  The new line received critical acclaim.  And Joe Quesada was later hired away from his own company to work for Marvel as their editor-in-chief. 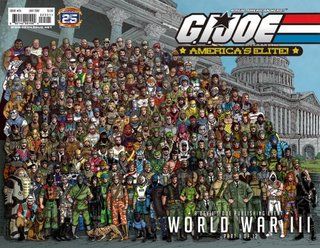 The cartoons had been off the air for a decade.  The toys were no longer top-sellers.  So it seemed a little odd when Devil’s Due Studios decided to bring back GI Joe through Image Comics.  But Josh Blaylock’s idea was clearly an inspired one.  The new comic appealed to those who had grown up on the cartoon and comic books.  Those fans were now adults and a good portion of them were comic book collectors.  The new first issue of GI Joe was a huge success.  The popularity of the title inspired others to follow suit and soon comics were deluged with a boom of  ‘80s cartoons.  The Transformers arrived in 2002 via Dreamwave and Image.  Top Cow brought back the Battle of the Planets that summer.   Wildstorm came out with the Thundercats that fall.  And Image showed up with Voltron in 2003.  The boom was somewhat short-lived but the effect was long lasting.  GI Joe and Transformers have been published pretty much continuously for the last decade, though they’re both now at IDW.  Plus, the success of the comic books allegedly inspired Hollywood studios to green-light live-action movies for these properties.

I was wondering what tagline 'America's Favourite Teenager' had in the early days, prior to the T term being coined and there it is in the opening par, 'America's Newest Boy Friend'. I guess the US was a lady!

Did that 'don't call me Archie' but fade quickly then? Why Chick?

Thanks for a great piece, Chris.

Chick was a nickname back then for boys, and I guess the MLJ writers thought it was popular, and maybe it was. Anyway, I've now read the first two Archie Archives from Dark Horse, and "Chick" has yet to re-surface. Either it was a throwaway line, or they thought better of it.

And the tagline for Archie in the first few years was "Mirth of a Nation."

Thaks Cap! Or would you prefer Chick?

Comment by Patrick Curley on October 14, 2011 at 7:33am
Mirth of a Nation seems obviously a play on the famed film Birth of a Nation, although it does seem a bit odd that they'd be punning on a movie that had debuted some 26 years earlier.  Archie's success in the comics may owe quite a bit to the long-running radio program.  I note that Archie only appeared once on the cover of Pep before the show started, but appeared on every cover shortly after its debut.