Chuck vs. the Angel de la Muerte (3): Season three of Chuck is notable for increasing the international scope of Chuck, an angle that would continue through to the end of the show. In this episode, a Central American dictator comes to LA. The dictator has a brutal record and a long-simmering rivalry with Casey. However, while the team is keeping an eye on Premier Goya (played by Armand Assante), Chuck’s brother-in-law Dr. Devon Woodcomb, aka Awesome, saves his life. The episode provides interesting background for Casey, some wonderful twists and a fun mix of family and action.

Chuck vs. First Class (5): For the third time in three seasons, Chuck is given a romantic rival for Sarah. In this case, he flirts with Kristin Kreuk in the first class section of an airplane while on his first solo mission. However, the show simultaneously set up a possible romantic interest for Sarah in their new spy supervisor, Shaw, played by Brandon Routh. The relationship complications increased to almost absurd levels, which was perfect for a show that was as comfortable with farce as Chuck.

Chuck vs. the Beard (9): One of the major changes in season three is that an upgraded Intersect gave Chuck access to skills as well as knowledge. However, the new Intersect develops a glitch and Chuck is temporarily sidelined from the team. At the same time, Morgan fires Chuck as his best friend due to his inexplicable behavior. The crisis allows Chuck to finally come clean to Morgan, setting up a new dynamic for the show in which Morgan first covers for Chuck and then eventually becomes a part of the spy team.

Chuck vs. the Tic Tac (10): Season three spent a lot of time building up Chuck’s supporting cast: Awesome, Morgan and now Casey. In one storyline, we learn about Casey’s history as a soldier and a spy. We also learn that he faked his own death when he joined the CIA in order to protect his loved ones. In the present storyline, Casey is framed for murder and the team has to clear his name. However, the operation involves Casey’s former fiancee and Casey discovers that he has a daughter named Alex. It’s a great character episode, with a lot of emotion and a lot at stake.

Chuck vs. the American Hero and Chuck vs. the Other Guy (12 & 13): The Shaw storyline comes to a dramatic height in the middle of season three. For most of the season, Shaw has been a romantic rival for Chuck and someone who might possibly lure Sarah back to Washington DC. He’s also been a professional rival, occasionally supplanting Casey’s place on the team and bossing Chuck around. But on a mission in Rome, Chuck learns that Sarah was the agent responsible for the death of Shaw’s ex-wife. Even worse, Shaw knows it and is setting Sarah up for revenge. The team is fractured and Chuck is all alone. Yet somehow Chuck has to stop Shaw, save Sarah and prove himself as a spy. It’s a thrilling two-parter, full of action and intrigue. And it’s an important moment for Chuck as he finally fulfills his potential.

Chuck vs. the Subway and Chuck vs. the Ring Part II (18 & 19): Shaw returns for this two-part finale. Their former ally is now working for the terrorist organization The Ring and is out to destroy the entire team. Meanwhile, Chuck continues to

experience glitches with the Intersect which could potentially destroy his mind. Scott Bakula returns as well for this intense, fast-paced finale.

Chuck vs. the Anniversary (1): Chuck and Ellie’s dad had been an important character for two seasons. With season four, we finally meet their mother Mary, played by Linda Hamilton. Her introduction is wonderfully complex. We don’t know if she’s an undercover spy, an assassin or something worse. The failed reunion brings a lot of emotional baggage to the fore for Chuck and Ellie. It’s one more way in which Chuck stays connected to its core audience- the Generation Xers who were raised on Star Wars and video games, but many of whom also grew up in broken families.

Chuck vs. the Coup d’Etat (4): Every once in a while, I have to break with the crowd. The consensus is that the first appearance of Premier Goya in season three is better but I preferred the second appearance when the team traveled down to Costa Gravas. I loved the dynamic of a dictator trying to transition to democracy against the wishes of his inner circle. More than that, I loved the secondary storyline in which Morgan begins to show romantic interest in Casey’s daughter Alex. Casey and Morgan had been a wonderful odd-couple for much of season three

and this added an amusing complication to their relationship.

Chuck vs. the First Fight (7): Chuck and Sarah are finally a couple but that doesn’t mean everything will go smoothly between them. They have their first fight in this episode and Chuck looks for advice from an unlikely source- the frumpy British analyst Gregory Tuttle played by Timothy Dalton. Dalton was wonderful as Tuttle, cringing in the midst of a firefight in a mockery of his time spent as James Bond. But the twist was even better: Tuttle was a front and Dalton was really Alexei Volkoff, the international arms dealer they’ve been trying to find since the end of season three.

Chuck vs. the Balcony (11): Sometimes I love everything about an episode. But sometimes I develop an affection for an episode based on one particular moment or scene. In this case, Chuck and Sarah are sent on a mission in France. Chuck decides that it’s the perfect place to propose- a beautiful balcony with vineyards in the background. Of course, nothing can ever go smoothly and a few gunmen spoil the romantic rendez-vous. For me, it’s a great example of the way in which Chuck’s spy life complicates his personal life and vice versa.

Chuck vs. the Push Mix (13): Chuck was never a ratings monster. It escaped cancellation on multiple occasions. But one side benefit was that the show had multiple big endings. This mid-season finale was planned as a series finale before they were given yet another reprieve. The result was an excellent episode in which multiple loose ends were tied up and Chuck had his final confrontation with Alexei Volkoff. It was full of exciting action and also emotionally satisfying.

Chuck vs. the Masquerade and Chuck vs. the First Bank of Evil (16 & 17): The second half of season four as a little inconsistent as the writers had to figure out what to do next. Personally, I liked the introduction of Vivian and I loved the twists at the end of these two episodes. In the first, we learn that the British heiress targeted by Volkoff’s men is actually Volkoff’s daughter. In the second, we watch as Chuck unwittingly turns a potential ally into a new nemesis. These two episodes are excellent examples of how Chuck could play against expectations, surprising the audience with new directions at the drop of a dime.

Chuck vs. the Last Details and Chuck vs. the Cliffhanger (23 & 24): Season three ended with Ellie and Awesome’s wedding. Season four ended with Chuck and Sarah’s. Once again, it was a wonderfully fast-paced finale, with multiple obstacles to overcome, returning villains and high comedy. 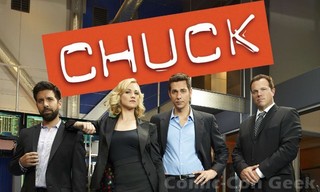 Chuck vs. the Hack-Off (5): There are three reasons to love this episode. First, it was

one of several to showcase Carrie Anne Moss as security mogul Gertrude
Verbanski and the first to feature her as an uneasy ally instead of a caustic rival. Two, it included a great guest appearance by Community’s Danny Pudi as a geeky new tech specialist at the BuyMore. Three, it highlighted Chuck’s ability as a computer programmer in a humorous way as he binged on a big bottle of white wine while trying to out-hack a gang of geeks.

Chuck vs. the Curse (6): I’m a big fan of Chuck’s supporting cast, whether it’s his spy team, his quirky co-workers or his perfect family. This episode showcases Awesome and Ellie on a date night. Like a lot of couples with a baby, they’re looking forward to some private adult time. Instead, they get mixed up in one of Chuck’s spy adventures. However, they aren’t aware of what’s going on and mistakenly think the spy adventure is a role-playing game to spice up their relationship. The episode is full of humor, drama and yes, romance.

Chuck vs. the Santa Suit (7): Certain scenes simply stick in the memory. In this case, it’s the completely unexpected and totally hilarious scene in which General Beckman kisses Chuck while he’s wearing a Santa suit. In season five, Chuck’s team has set out as private security consultants. However, in this episode, Chuck needs Beckman’s help to break into a CIA facility. Beckman is willing to bend the rules for one of her former agents. But, of course, it’s never easy. One of Beckman’s counterparts starts to hit on Chuck and the only way she can extricate him is to plant a big kiss on him herself. It’s all part of an excellent episode that balances humor and tension in a wonderful way.

Chuck vs. Bo (10): There are two main stories in this episode. In the one, Chuck and Morgan go to Vail to investigate Morgan’s earlier actions when he was in possession of the Intersect. They uncover a few surprises, including a tryst with Bo Derek (playing a spy version of herself). Meanwhile, Jeff and Lester have been investigating the BuyMore’s connection to the CIA. However, whenever they get close, Casey knocks them out and leaves them in the desert hoping that they’ll think they blacked out after a Las Vegas bender. The repeated desert scenes are hilarious. And the confrontation with Bo Derek is pretty good too.

Chuck vs. the Goodbye (13): After so many finales, it wasn’t easy for the final ending to measure up to some of the great episodes of before. The penultimate episode didn’t have quite the pizzazz of earlier season-enders. However, the finale did provide some important emotional closure. They didn’t wrap everything up neatly with a bow. That would have been too pat an ending for a show that upended its status quo as often as Chuck. But they did hint at the possibilities of a real, peaceful family life for Chuck and for Sarah- something they’ve wanted from the beginning but always worried was just out of reach. The closing scene brought tears to my eyes and was a fitting way to say good-bye.